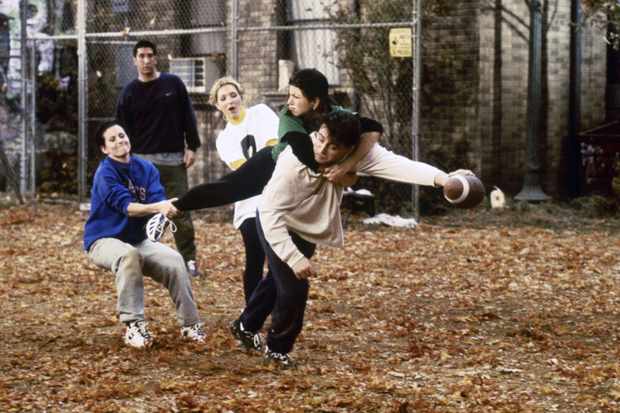 Every single episode of Friends is now available to stream on Netflix. That’s 84 hours of Chandler’s one-liners and embarrassing situations involving Ross and his ill-advised attempts at self-improvement.

Each one is extremely watchable (ask the millions of people who have whiled away afternoons sitting catatonic in front of whatever re-runs happened to be on Comedy Central) but some of them are much, much funnier than others. Take, for example, almost any episode in which Ross is part of the lead storyline. It has been said many, many times before, but he is clearly the best (and for that matter, the funniest) character on the show.

Check out our list of the funniest episodes of Friends, ranked.

Joey sits in Chandler’s chair, Phoebe gets hummus on her dress, and Monica is freaking out over a voice message that her ex Richard (Magnum PI’s Tom Selleck) has left on her answering machine. Not exactly the best reasons for missing a black-tie event, so we can see where Ross’s frustration comes from.

In another show, one of the main characters suffering a mental breakdown in reaction to the breakdown of their marriage might have been rather harrowing. But not Friends, and certainly not Friends’ most reliably hilarious character, Ross. In this classic episode, the three-time divorcee is given the not-so-affectionate nickname “mental Gellar” by his colleagues, and placed on a sabbatical after he freaks out at his boss for accidentally eating a Thanksgiving leftovers sandwich he had left in the fridge.

New Year, same Friends. Ross’ determination to do something new every day (leading him down a slippery slope that ends with a risqué pair of leather trousers), Chandler’s vow not to make fun of people and  Joey’s plan to learn how to play the guitar were never likely to stick, but they were always likely to provide comedy gold.

Joey’s Days of Our Lives character Dr Drake Ramoray finally comes out of his coma, but there’s a twist. His brain is transplanted with that of Joey’s soap veteran co-star Cecilia Monroe, who must teach him how to play the role of bitchy stepmother. There’s also a winning subplot in which Ross tries to learn the bagpipes as a surprise for Monica and Chandler’s wedding.

Ross doesn’t want his parents to know he got stoned in their house when he was a college student – and when someone lets it slip to them over Thanksgiving dinner, a whole load of the group’s other secrets come bubbling to the surface in a hilarious climax.

Danny DeVito aka Officer Goodbody arrives at Monica and Chandler’s apartment to strip for Phoebe’s Bridal shower. He’s panting, red-faced and sweaty, just from climbing the stairs in the apartment block. It goes downhill from there.

As the gang finishes up their vacation in Montauk, Monica gets stung by a jellyfish leaving Joey and Chandler to step up to the plate and put an end to her anguish. Elsewhere, Ross falls asleep while reading an 18-page letter Rachel wrote to him as the two prepare to get back together. It doesn’t go down well.

Undoubtedly the best guest-starring role of the entire show. Brad Pitt (then husband to Jennifer Aniston) stars as Will, an old schoolmate of Ross and Monica’s, who was bullied by Rachel. Over the course of the episode, it comes out that he and Ross had started an I Hate Rachel Green club, and spread a rumour that she was a hermaphrodite. Kids, eh?

5. The one where Joey loses his insurance (season 4, episode 6)

Where’s Obamacare when you need it? Temporarily without health insurance due to his recent unemployment, Joey strains to avoid a trip to the doctor, despite a hernia rendering him a ball of agony on the floor. Elsewhere, Rachel and Monica discover Ross has adopted a British accent while lecturing at the university.

Everyone (bar Ross) now knows that Chandler and Monica are secretly together, but they’re all keen to have a bit more fun with it before the truth is out in the open. Phoebe’s vigorous seduction of Chandler culminates in a hilarious game of chicken, as Monica’s competitive streak places her man in the firing line.

Ross is not fine. He’s just walked in on Joey and Rachel sharing a passionate kiss – and he doesn’t know how to deal with it. He keeps saying he’s fine, though, in high-pitched tones. That’ll do the trick.

Forget about the rugby, this episode is all about the subplot in which Chandler is so desperate to escape the grasp of his ex-girlfriend Janice (and too cowardly to tell her the truth) that he pretends he’s moving to the Middle East. She doesn’t let him off the hook so easily.

Ross is determined to prove that he could still beat up his female friends, Rachel and Phoebe, despite their recent self-defence classes. He claims that he has “Unagi”, something he defines as a state of total awareness, in his years spent practising karate. Unagi is actually a type of freshwater eel.