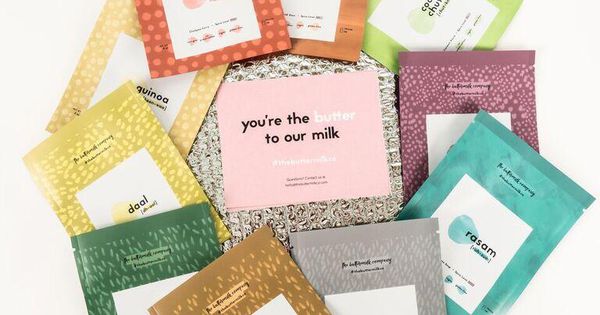 Once a software development engineer at Amazon, Mitra Raman stepped out on her own to create Buttermilk Company, a home-delivery service for authentic Indian food. Raman got the idea in college when she would frequently miss her mom’s cooking.  Ordering from Indian restaurants in the U.S. weren’t always a healthy option or affordable. On a visit home, Raman’s mother showed her the ingredients for her favorite meals that only needed the addition of water. With that in mind, she created Buttermilk Company.

She kicked the idea into high gear when she applied to Y Combinator on a whim and was accepted into the accelerator.  Raman launched in three months and learned as she went. Without having a background in the food industry, she faced a challenging learning curve.

Currently, she has over 300 customers throughout the U.S.  It has been Raman has also incorporated a 5% give back to populations that are underserved.  Raman has created several meal packets including South Indian favorites rasam, basmati rice, sambar and upma. Each order is made fresh and start as low as $4.00.

Enza Hibler was a stay-at-home mom with no experience in the food industry. In 2007, Hibler’s daughter was suffering an illness that could not be diagnosed.  Over the course of three years, she saw a total of seven doctors with each one prescribing pain medications that did not work. Hibler decided to stop everything.  No more 8-hour testings at a gastroenterologist, endoscopies, colonoscopies or meds. She started researching and learning everything she could about digestion. After many nights and early mornings, she came to one conclusion. The food you eat affects everything.

“If you can’t read it, you shouldn’t eat it,” she said.  “I would spend three to four hours in the grocery store reading labels,” Hibler continued.  Hibler began to blend her own ingredients whole fruits and vegetables to make meals that would taste good and were good for her daughter.  Months later, her daughter bounced back. Seeing the results, Hibler took it a step further and decided to launch IncrediPops, non-dairy and organic frozen pops made with 100% raw, unprocessed  food.

Though the process to launching IncrediPops has been challenging, Hibler has no regrets.  “What the world needs is your gift. Everyone has a gift the world needs.  When you can figure it out, it’s like a web of connection,” she said.

Healthy food should be accessible and affordable for everyone.  That’s why Sam Polk, a former hedge fund trader, founded a nonprofit called Feast which helps residents of inner cities address food-related health problems like diabetes and obesity.   Feast offers cooking classes, nutrition education and free produce. Adding such a value to communities like South L. A., Feast grew faster than what Polk could handle. Being a less established nonprofit meant they couldn’t get government funding needed to keep up with the growing waitlist of participants.

In 2015, Polk started Everytable, a for-profit model that sales healthy food with the price determined by the average income in that neighborhood.  The latest store opened in Compton, CA earlier this year with another opening soon in Watts.