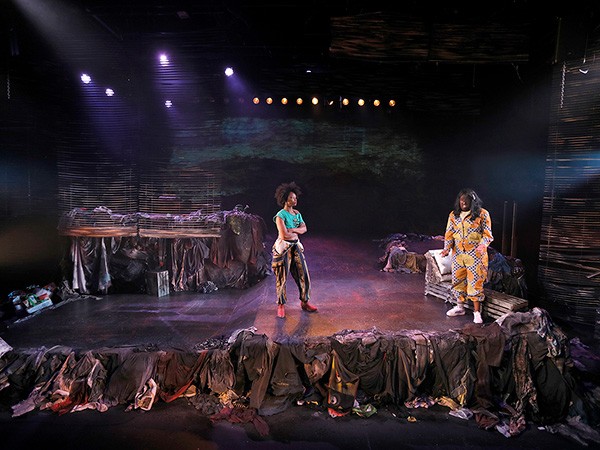 Racine (Kamaria Hallums-Harris) and Anaia (Maya Burton) set out to kill their father.

All her life, Anaia had dreams about her mother burning in a fire. It was the same fire that burned up her family home, and that disfigured her face and the body of her twin sister, Racine. When the twins reconnect with their estranged mother, whom they call She (and also God), they learn Anaia’s dreams are actually memories, and that the fire was no accident.

Their father, whose name is Man, deliberately lit She and the children on fire. Now on her deathbed, She has one request of her daughters: Kill Man and everyone around him.

The audience learns all of this information in the first 10 minutes of Is God Is, a new play by Aleshea Harris put on by Washington Ensemble Theatre at 12th Avenue Arts through September 23. The next 80 minutes of the show are a funny, bloody, twisty (but kind of predictable) revenge play that’s tons of fun to watch.

Tapping into the resurgent black yeehaw aesthetic, Lex Marcos’s set combines elements of Afropunk and spaghetti westerns. Think lots of camouflage, chiaroscuro lighting, and a neon-red cowboy suit. Form reflects content here in that all the players are black—ditto the playwright and the director—and the narrative is an over-the-top western.

The wry humor mixed with hyper-violence recalls several of Quentin Tarantino’s films, which themselves recall 1970s blaxploitation films. And Harris’s references to acts of revenge in Shakespeare seem to number in the millions. Hamlet is in here, The Tempest is in here, and at one point, one of the twins almost exactly echoes Romeo’s line to Tybalt in Act III, shortly after the death of Mercutio, saying, “Either you, or I, or both of us must go with him.”

Judging by the first few minutes of the show, I thought the whole play was going to be as linguistically rich as Shakespeare, too. She describes the children as “giggling like they got the sun in they mouth,” a visually stunning image with an impeccable rhythm. But halfway through the show, Harris mostly abandons lyricism for spoken subtext, allowing the less compelling aspects of the genres she references to take over the language.

As with all allusions, the references sparkle for those who catch them, but they also reinforce the idea that revenge (especially revenge enacted on the patriarchy) is a tale as old as time. And while Harris doesn’t ultimately advocate for the killing of all bad men and their allies—the play is more complex than that—she does have a lot of fun entertaining the idea.

Though they spend a lot of time committing extreme acts of violence against one another, the performers are clearly having a lot of fun, too. Kamaria Hallums-Harris and Maya Burton, who play Racine and Anaia, respectively, have great chemistry. Watching them both go off on the other characters is a source of pure joy, as is watching them care for one another in the show’s few moments of relative peace. Tré Scott, who plays a minor character named Scotch, steals every scene he is in. And Brace Evans, who does double duty as the father and a bumbling side character named Chuck Hall, is perfectly evil and conniving in the former role and wonderfully aloof in the latter role, which shows impressive range.