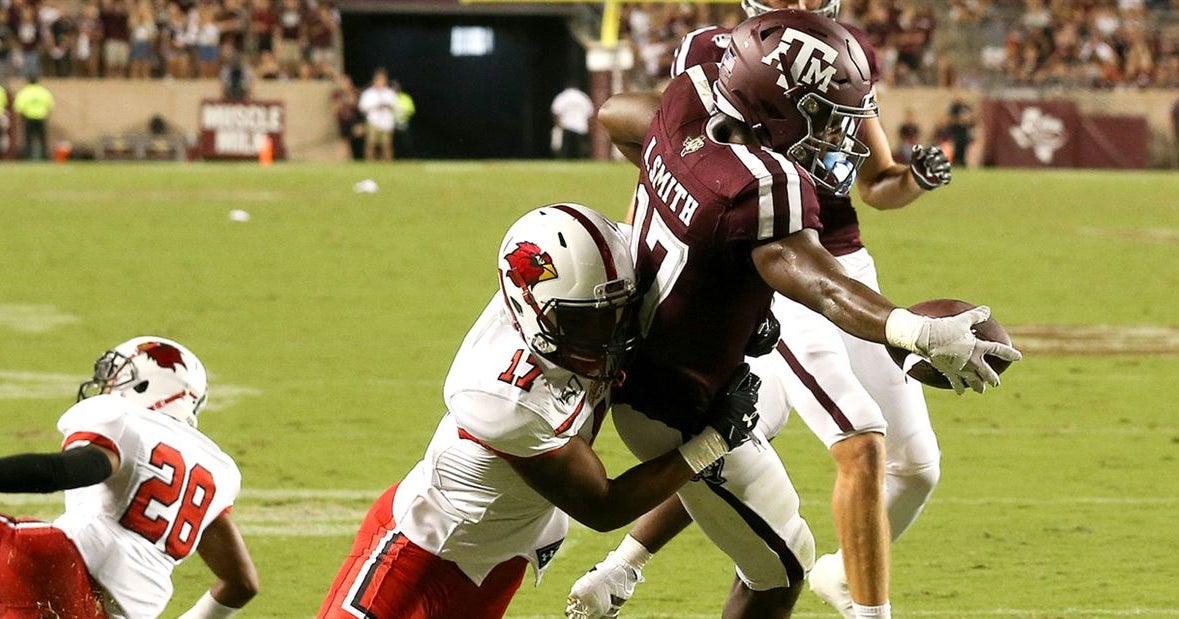 Texas A&M wideout Ainias Smith may have been the last commitment in the Aggies’ 2019 recruiting class but he’s fast becoming one of its most important components. Smith was a three star rated prospect and barely squeezed into the 247 Composite top 100 in the state of Texas even though he was one of the most productive players in the state not just during his senior season but also over the course of his career. He was named the most valuable player in District 20-6A as a senior but he also earned the district’s All-Purpose Player of the Year as a junior and Offensive Newcomer of the Year award as a sophomore.

He managed to average over 13 yards per catch as a receiver as a senior with 20 touchdowns on just 112 touches rushing and receiving. He also added three interceptions and 15 passes defensed as a starting corner even though teams tended to shy away from him in the passing game. Smith also tested well with a 4.5 electronically timed forty to his credit as well as a 4.00 20 yard shuttle time. These numbers are kind of eye popping as ESPN indicates that its best 40 time from prospects in the 2019 class was a 4.43 and his best shuttle time was a 3.95. He’s even got the bloodlines as he’s the younger brother of current NFL player and former Georgia Bulldog Maurice Smith.

Even so, Smith never garnered a lot of Power 5 offers due to his 5 foot 10, 187 pound frame although schools such as Georgia, Duke, Washington, Houston, and Texas Tech offered him. However, A&M boss Jimbo Fisher said that his late inclusion in the Aggies’ signing class wasn’t due to him waiting on the Aggies as much as the Aggies were waiting on him.

“He’s a guy whose family had a brother playing in the NFL” said Fisher at today’s press conference. “They’re very aware of taking visits, seeing things, making sure it’s the right fit, what’s going to happen. They were very diligent in a good way. We were always honest, always talking the whole time, and they were just being very patient in their decision making.”

What’s gone unnoticed when people discuss Smith is the fact that he officially visited A&M in November of last year and that he participated in one of the Aggies’ camps last fall. He wasn’t an afterthought on signing day because the Aggies had some numbers.

“We wanted him, loved him” said Fisher “He was in our camp. He was a DB, return kicks, he was in the slot. He was very natural at what he did and you saw that in camp and when he came here. We loved him on film. He was a guy we wanted.”

Smith showed up on campus in June which means that unlike many members of the freshman class he didn’t get to start making an impact until fall camp. However, he caught everyones attention right away and was one of the better players at Fan Appreciation Day and got quite a bit of work with the first unit on offense. In fact, he would have played in the season opener if he hadn’t gotten injured.

“He got injured on Thursday before our first game” said Fisher. “He had an injury in practice that kept him out of that game. He didn’t get to practice the whole week the next week so going into Clemson and so that was not something that you wanted to put him that environment (he saw limited snaps in that contest on special teams).”

Smith had six receptions for 66 yards and a touchdown against Lamar on Saturday night and had yardage after the catch on three of his receptions via his ability to make people miss. He also chipped a kickoff return. As entertainment value, he was an instant impact player in a 62-3 win over the Cardinals  and showed everyone why Fisher and his staff evaluated him as they did.

“Those guys that really understand ball and can do a multitude of things…he has a really, really good skill set as far as ball skills, ability to run, can make you miss, has very good top end speed. He’s a natural football player” said Fisher.