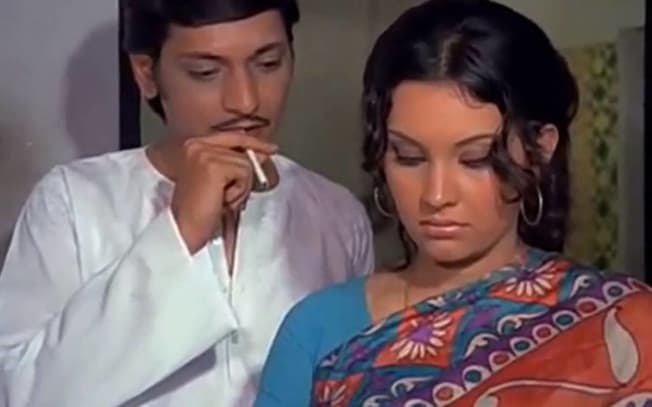 Somewhere along the halfway mark in Rajnigandha (1974), we are suddenly watching a movie within a movie. Looking at the screen are our friends Sanjay and Deepa, played by Amol Palekar and the late Vidya Sinha. Despite Sanjay’s best attempts to distract them with confectionary and conversation, Deepa and her family are focused on the cinema screen where the 1968 potboiler, Kahin Din Kahi Raat is playing out. Suddenly, Helen and Biswajeet break out singing “Qamar Patli, Nazar Bijli,” prompting Sanjay to scoff that it didn’t take the characters even a moment to go from crying to dancing.

It’s true, the moment is ridiculous: Biswajeet is wearing a blonde wig, Helen is dancing under large chandeliers that were once Hindi cinema shorthand for opulence. The scene is so far removed from reality that it throws the ordinariness of Rajnigandha’s middle-class protagonists into sharp relief – particularly Sanjay, whose aspirations are so provincial that he hopes to get only pass marks in his BA exams.

Of course no one breaks into song and dance in the world of Amol Palekar, the paragon of People Like Us. That would reek of artifice, and there isn’t a blade of that in the many PLUs that Palekar would go on to play in subsequent years, even when he was literally conning folks on screen. Forty-five years later, it is tough to believe that Rajnigandha is Palekar’s first major role in a “New Cinema” film, so completely does he inhabit – rather, own – his mundanity.

To fully comprehend the appeal of Palekar’s pencil-moustached characters, it is important to zoom out a little. The cinema of the 1970s, both at home and abroad, was a wild buffet of machismo. In Hollywood, the decade had begun with The Godfather and ended with James Bond, via the “Golden Age” of pornography and a genre that came to be known as “Blaxploitation”. Each of these offerings was characterised by violence and sex, the twin forces propelling a hot lava explosion of masculinity. Bollywood came up with more of the same, except our storylines had the added layers of socio-economic inequality and the rot within India’s bureaucratic and moral heart. Even this yielded a plethora of one-note heroes whose sum total of a personality could be signified by a moniker – Vijay, a model of such dashing, disproportionate manliness, generations of young men would attempt, and spectacularly fail to live up to it.

No one wanted to live up to be Amol Palekar – but as things stood, you just were Amol Palekar, whether you liked it or not. In the same decade as Amitabh Bachchan and Dharmendra proved to be the engines of the industry, pushing forth prototypes of outsize heroism, versions of everyman Palekar chugged along.

Where the Vijays were police officers or vigilantes outside the purview of law, Palekar’s characters were short kurta-wearing, collar-clutching, mousy pen-pushers that wore mop tops and full-bodied smiles. In film after film, in Chhoti Si Baat and Chitchor and Baaton Baaton Mein, in the universes of Basu Chatterjee and Hrishikesh Mukherjee, on public transport and in Bandra apartments, he played the man on the street. I once read – with a complete lack of surprise – that Palekar used to work as a clerk in the Bank of India by day while he pursued painting by night. Who else could essay a white-collar worker with the soul of a poet who you might meet on a train or a bus, if not him? Who else would Vidya Sinha, dressed in a Patola sari, walk to college with, if not him?

Much of the action in Chatterjee’s Chhoti Si Baat (1976) takes place on public transport or the iconic Samovar restaurant. I am not sure the film has entirely stood the test of time – in fact, viewed through modern glasses, some of it is downright problematic. But I’d still watch it any time to be able to gaze upon Palekar, who plays the painfully timid Arun Pradeep, small fry in a small company, who is gypped by everyone. Arun has to be taught how to be a “real man” ergo, a douche, by a colonel that lives in an old Parsi bungalow in Khandala. Even when he is no longer the “noble savage”, Palekar brings a certain refinement, a genteelness, to the assholery he metes out to his colleagues and rivals.

So finely did Palekar hone his Sanjays and Aruns and Tonys, that they became completely copacetic. By 1979, Palekar had perfected the poor sod role so well, that he could afford to parody it. In Mukherjee’s Gol Maal, and his best-loved role(s), he was able to play both the idealised Ramprasad he’d been essaying through the decade, as well as “Lucky”, a realistic inversion of that ideal. Gol Maal has been interpreted as a critique of the Emergency, but it’ll go down in history as the film that consolidated Palekar’s allure. He was, as millennial Twitter might put, a wholesome middle-class snacc. You came for the dopey moustache and printed nylon shirts, but you stayed for the decency.

And now, that exists only on the fringes of nostalgia. We’ve lost the Aruns and Sanjays, and the time capsule that they lived in. To hanker for Palekar is to hanker for an era. It is going looking for a pre-hyper-congestion Bombay and the simple sophistication that went with it, an Edenic past where the monsoon could still be romanticised and even stalking seemed acceptable. Where ordinary people with job titles like “Supervisor Grade 2” at companies with fanciful names like Jackson Tolaram, could afford to live in Khar West houses with balconies.

Now, however, the monsoon is rubbish. Khandala is overrun by wax museums, and old Parsi bungalows are mildewed. No one wears a Patola sari to college anymore. Just like Samovar, the people that existed in these movies are gone. Even that angle of the sunlight is gone.

Palekar has gone on to do so much more. He’d direct Daayraa (1996), which would go on to win several international awards, but never get a theatrical release in India. He’d make Paheli, India’s entry to the Oscars in 2005, and Thodasa Roomani Ho Jaayen (1990), which would be memefied more than it would be watched. He’d refer to acting as his “second love”. And years later, he’d find himself in the centre of a controversy for expressing a mildly critical opinion of the establishment, and be asked to stick to the script.

But every time, you saw a terrazzo floor with glass grouting, you’d think of Amol Palekar. When you rifled through old pictures of your parents in oversize goggles and flared pants, you’d see Amol Palekar. You’d walk the leafy lanes of Bandra, and find the world Amol Palekar once walked in a peeling paint job and a lopsided name plate. And that middle-class hero will always be ours.

Karanjeet Kaur likes Mughal miniatures, mountains, moot points, and alliteration. She is the Creative Editor at Arré and tweets as @kaju_katri.

This article was originally published on Arre

Stay updated with all the insights.
Navigate news, 1 email day.
Subscribe to Qrius