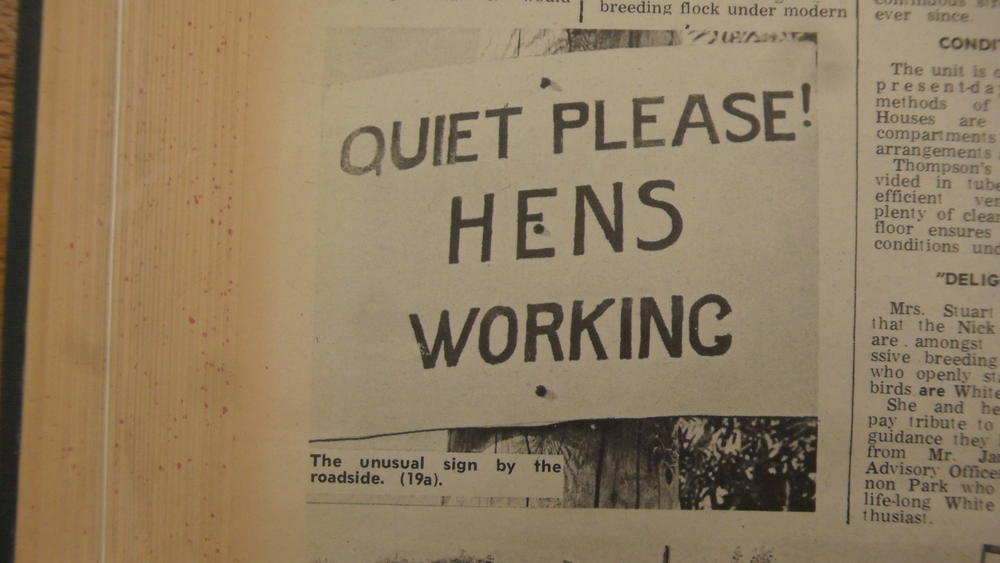 The arresting notice – “Quiet Please! Hens Working” – has been catching the attention of passers-by on the Newtownards-Portaferry road in County Down. And behind it is an interesting story going back some years.

For a long time Mrs Josephine Stuart of Nunsquarter felt strongly that something had to be done to save the traditional pure breeds of poultry.

Anxious to play her part in this she was working with the White Leghorn in the hope that it would survive as the useful breed it was.

As long as she, and others who thought like her, continued to do this she was confident the breed of her choice would not die.

Then her son Patrick went to Greenmount Agricultural College. During his course at the college he decided that he would go into poultry.

The result was that he became a breeder of H & N Nick Chicks for Dungannon Park and this was the end of his mother’s flock which was on range.

Since then, however, Patrick has taken up an appointment and his mother and her sister, Miss Mona Coulter, now run the 1,050 bird breeding unit as a joint undertaking.

With the running of a breeding flock under modern conditions there is always the problem of disposing of the early pullet eggs until such times as the hatchery starts taking hatching eggs from the flock.

Mrs Stuart and her sister decided that they would erect a sign announcing that they had eggs for sale.

It so happened, however, that before the sign was erected an uncle arrived on a visit from America.

“You won’t sell eggs with a sign of that sort,” was his comment. “The whole country is full of them. In America no egg producer with an eye to business would dream of putting up such a sign. What you need is a gimmick!”

His advice was followed and the farm has had a continuous stream of callers ever since.

The unit is operated under present-day accepted methods of management. Houses are divided into compartments with perching arrangements along one side.

Thompson’s mash is provided in tube feeders and efficient ventilation and plenty of clean litter on the floor ensures perfectly dry conditions underfoot.

Mrs Stuart is delighted that the Nick Chick people are amongst those progressive breeding organisations who openly state that their birds are White Leghorns.

She and her sister also pay tribute to the help and guidance they have received from Mr James Telford, Advisory Officer for Dungannon Park, who himself is a life-long White Leghorn enthusiast.