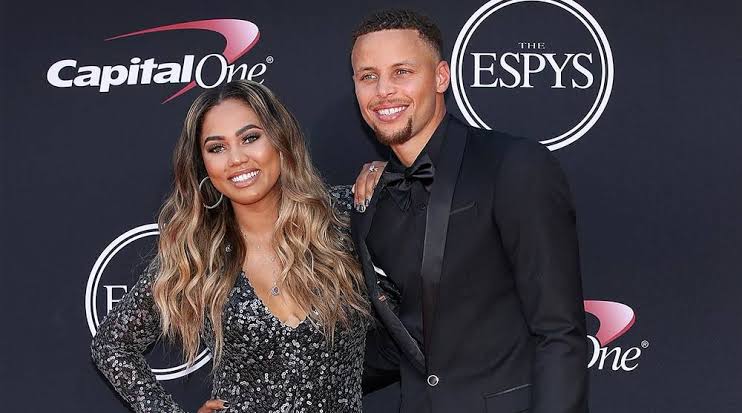 “Arrogant,” is what Ayesha Curry, who is now Stephen Curry’s wife, had felt about athletes. But the feeling remained only untill she had met Stephen.

Ayesha first saw a “cute” Stephen in a church in Charlotte when she was 14 and he was 15 years old. However, it was not untill a few more years they would actually meet each other.

The couple met in an awards festival when Ayesha was working as an actress and model in Los Angeles, while Steph was playing basketball at Davidson College. It was about that moment that Ayesha talked about the basketball athlete being “cute and silly.”

Ayesha soon moved back to Charlotte close to where Stephen was playing college basketball at Davidson College. And four years on, on July 30, 200, Stephen Curry and Ayesha Curry married when Stephen was 23 and his partner a year younger.

Ayesha was born on March 23, 1989 in Markhram, Ontario, Canada. She was born to John and Carol Alexander- John from a mixed African-American and Polish descent, and Carol of Afro-Jamaican and Chinese-Jamaican descent, with four siblings- Maria, Janiece, Jaz and Chad.  She was born and raised in Toronto until the age of 14, when she moved to Charlotte, North Carolina.

She is an  actress, celebrity cook, cookbook author, and a television personality.

At age 12, Curry acted as the love interest in the music video for “Too Young for Love” by Suga Prince (now known as Sevn Thomas). Before their marriage, Ayesha had appeared in a trying to build on a career in acting. She had appeared in a film short Underground Street Flippers (2009), The TV movie Dan’s Detour of Life (2008), and in the direct to DVD movie Love for Sale (2008) among a few others.

After her marriage, she focused more on cooking- something that she was fascinated from a very young age. She became a celebrity cook with her cooking videos and a few books. Her love for cooking was definitely helped by Stephen Curry’s stardom. While Ayesha has never not accepted that, she has, in a recent show named red table talk, said her partner’s fame has also been a reason to worry on other aspects.

“Something that really bothers me, and honestly has given me a sense of a little bit of an insecurity, is the fact that — yeah, there are all these women, like, throwing themselves [at him], but me, like, the past 10 years, I don’t have any of that,” she said. “I have zero — this sounds weird — but, like, male attention, and so then I begin to internalize it, and I’m like, ‘Is something wrong with me?’”

One year after their marriage, Ayesha Curry gave birth to Riley Elizabeth, in July 2012.

Given a Basketball player’s hectic schedule, it might not be the easiest to spend time with kids and family. Curry has attributed to video calls they have together that keeps him closer to the kids even when he is far away.

“FaceTime helps me a lot. I feel like I’m at home even though I’m not. My girls get to see me, and Riley is at the age where she asks where I am and when I’ll be back, counting down how many ‘sleeps’ until Daddy gets home,” Steph shared.