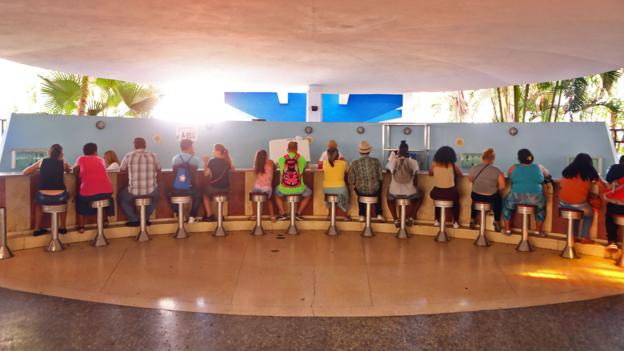 Analies Gómez Coyula is deep into her third bowl of helado (ice cream). Her boyfriend, Daniel, is equally engrossed as he spoons up his 13th scoop of vanilla. Aunt Ana Lidia seems content, with two ensaladas – five scoops apiece – already devoured. She unfurls an abanico and fans herself against the heat of Havana in May, then ladles the contents of her third bowl into a plastic container to take away.

All through August, BBC Travel will explore different ice cream traditions around the globe. Check back each week for a new Frozen Flavour.

Share your favourite ice cream photos with us on social media using #IceCreamBBC for your chance to be featured.

I feel abstemious in comparison with my single ensalada mixta of five flavours, topped with caramel sauce and crushed cookies.

We’re at Parque Coppelia, the world’s largest ice cream parlour and an iconic institution in Cuba. Taking up an entire block diagonally opposite the Hotel Habana Libre in the once-tony Vedado district, this state-run ‘people’s park’ offers a for-pennies indulgence for the masses and serves an average of 30,000 customers a day – and up to 600 at any one time.

When Havana sizzles, the entire city seems to descend seeking relief. The helado – served with taciturn efficiency by waitresses in 1950s plaid miniskirts – wins no awards. But no other experience speaks so sweetly to Cuba’s revolutionary idealism.

You may also be interested in:
• The world’s oldest ice cream?
• The man making the world’s tallest bike
• Denmark’s sweet answer to prohibition

Built in 1966, Parque Coppelia is laid out as four outdoor parks. At its heart is a two-storey domed pavilion that resembles a flying saucer mounted on spidery legs. Seemingly inspired by Oscar Niemeyer’s Cathedral of Brasilia, the pavilion is appropriately known as la catedral de helado (the ice cream cathedral) – a perfect metaphor in a country devoted to frozen dairy. Forget santería, the Afro-Cuban religion. Cubans worship at the heladería (ice cream store).

Each section has its own queue proportional in length to the strength of the sun. Even on temperate days, the lines snake around the park.

“It’s a tradition,” 56-year-old Ana Lidia told me. “It’s where I used to get together with my friends as a child.”

“It’s where you take family members on their birthday,” added Coyula, explaining that today is her aunt’s birthday.

Daniel peered at me. “It’s the perfect place for a first date,” he said, mid-scoop. “If it doesn’t go well, ya! Go home! But if it goes well, when you’ve finished eating you can go to the movies at Cine Yara across the street.”

“I love strawberry,” said flamboyantly bohemian Diego as he tried to seduce David, a straight revolutionary, in the opening scene. “Mmmmm… It’s the only good thing made in Cuba,” he added before slowly, salaciously, spooning a strawberry into his mouth.

David, of course, is eating chocolate. The two flavours have ever since been loaded with coded meaning about sexual orientation.

“Is it true that straight Cuban males won’t eat strawberry ice cream?” I once asked a table mate, breaking the silence as I spooned up my rapidly melting helado.

Lourdes Mulen Duarte, a statuesque middle-aged lady with skin the colour of aubergine laughed then looked around. “I don’t see anyone eating fresa.”

“That’s because they’re only serving vanilla today,” I replied.

She smiled, flashing white teeth, then returned to devouring her ice cream in silence.

Cubans can be some of the most voluble, talkative people in the world. But all talk ends once they’re seated with ice cream. Slurping helado is a heads-down, communal homage. Conversation at the shared tables barely rises above a murmur, as if Coppelia truly were a cathedral.

During a recent sojourn in Havana, Coppelia became part of my daily routine. I was a creature of habit, always choosing an outdoor section where the sunlight filtered down through the royal palms and jagüeyes (banyans). One day, for a change, I joined the line at the corner of L and 23 Streets for the spaceship pavilion. Entire families, singles from kids to abuelas (grandmothers), young couples in school uniform flirting and openly necking… Cuba’s rich diversity was waiting in line with feverish anticipation to pig out on as much ice cream as they could stuff into their bellies and handbags.

“¿El último?” I asked, Cuban style, to determine the last person in the queue. Inured to waits of one hour (longer on hot weekends), some habaneros (residents of Havana) wandered off to find pockets of shade, while others disappeared from view altogether. Eventually a queue director ushered us in, and the line coalesced in perfect order through some unfathomable and puissant osmosis.

We filed down a narrowing path that led to the pavilion. The ground floor – open on all sides – featured a curved marble-topped counter with barstools, diner-style. Rising from the centre, a spiral staircase coiled like a nautilus shell to the mothership above. I emerged beneath a dome, stunning in its architectural beauty, slanting over a four-leaf clover of circular rooms separated by stained-glass panes and open to the alfresco parks below.

This was a good day. Seven flavours were posted on boards by the entrance. But it being late afternoon, only three were now available, including rich, creamy mantecado made with egg yolks.

Concerned for my soaring cholesterol count, I ordered a two-scoop jimagua (twins) of vanilla.

“You don’t want an ensalada?” my waitress asked, surprised, assuming I’d made an error. There wasn’t a person around me who hadn’t ordered at least two of the five-scoop option, served in oval-shaped plastic bowls.

Legend has it that after the Revolution in 1959, Fidel – an ice cream lover por excelencia – ordered Coppelia built as a way of outdoing the yanquis (Yankees) with something better and bigger than Howard Johnson’s with its famous ‘28 flavours’. In fact, when it opened on 4 June 1966, Coppelia served ‘only’ 26 flavours – from almond and banana to vanilla and walnut – as homage to the launch of the Revolution on 26 July 1953, with an attack on the Moncada barracks.

Prior to the Revolution, Vedado was a chic upper-middle-class district and Cuba a highly stratified society with a vast impoverished underclass, mostly black, that rarely got to taste ice cream. Film director Tomas Gutiérrez Alea, with whom I briefly lived in 1996, chose Coppelia as the setting of Fresa y Chocolate because Fidel and confidante Celia Sánchez conceived Coppelia (which Sánchez named after her favourite ballet) as a way of transforming a run-down beer garden into an urban Arcadia where everyone – poor, rich, black, white, gay and straight – could collectively enjoy subsidised ice cream as equals.

No other experience speaks so sweetly to Cuba’s revolutionary idealism

“Oooof! As a kid, we came here all the time. It was a place where kids got together to socialise,” recalled my queue mate 46-year-old Vivian Hernández, swaying and drumming her fingers to piped-in music by Cuban musical duo Buena Fé. “The ice cream was so much better then. It was so creamy. The strawberry had real fresas inside.”

“We had sueros – ice cream shakes! And banana splits,” piped her same-age cousin Daneis. “You got tabacitos in the sundaes,” she added, recalling biscuit tubes named for small cigars.

“There was vaca negra, vaca blanco,” added 72-year-old Jorge Coalla Potts, who wistfully recited a long list of specials, including black cow, white cow – a vanilla sundae with Coca-Cola or lemonade. A ‘chocolate soldier’ was a tall sundae with chocolate ice cream; a turquino especial was a vertical cake between scoops of ice cream.

Then came the Special Period – the time of terrible scarcity caused by the collapse of the Soviet Bloc. Cuba lost its main supplies of butter and powdered milk. Unable to produce enough milk itself, the Cuban government had to choose between butter and ice cream. A hot climate. A feverish addiction to sugar. It was a no-brainer. Rations were reduced. But Coppelia kept on serving one peso (three pence) scoops, albeit reduced to only one or two flavours – an appetising indulgence that neither economic hardship nor the US’ stiffened embargo could stop.

In a land where the average monthly salary is about 750 Cuban pesos (£20) and many people still subsist on food rations, this populist oasis of plenty guarantees that Cubans can enjoy as much of this sugary treat as they want at little cost.

“Only one?” Hernández asked me. Like Danies and Potts, she requested two ensaladas, one banana and one vanilla.

***Coppelia is all about the communal experience: resist being steered toward a small ‘tourist’ section offering immediate service for an exorbitant one peso convertible (75 pence) per scoop. All other sections charge in local pesos (aka moneda nacional); convertible pesos aren’t accepted. You’re expected to vacate your seat as soon as you’re finished to make way for those still queuing outside.***

Frozen Flavours is a series from BBC Travel uncovering ancient traditions behind ice cream and the different ways the frozen treat is enjoyed around the world.

If you liked this story, sign up for the weekly bbc.com features newsletter called “If You Only Read 6 Things This Week”. A handpicked selection of stories from BBC Future, Earth, Culture, Capital and Travel, delivered to your inbox every Friday.