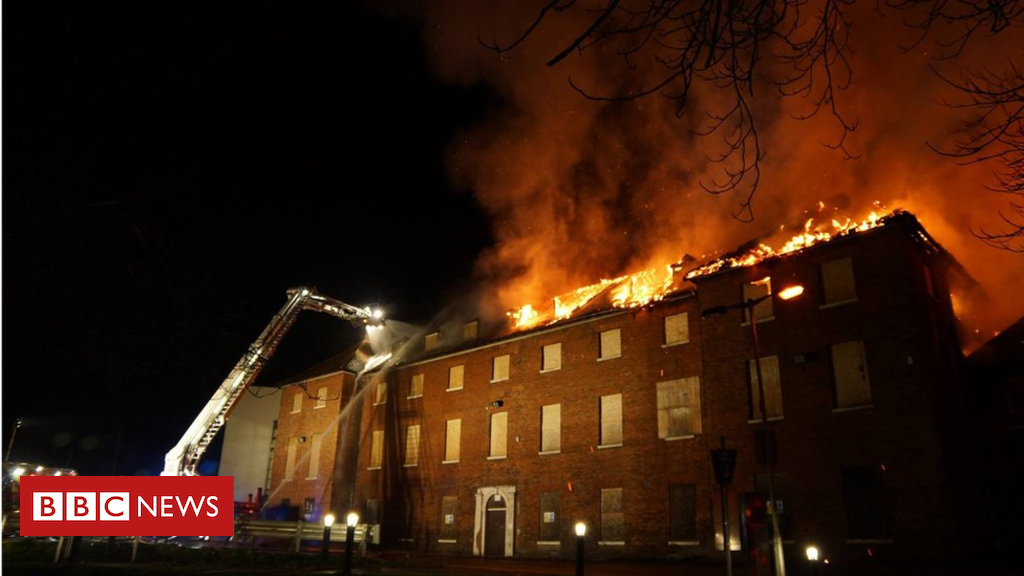 A derelict building at an NHS health complex has been severely damaged by a fire.

Crews were called after the blaze broke out at Bedford Health Village on Kimbolton Road in Bedford at about 18:07 GMT on Thursday.

Bedfordshire Fire and Rescue Service said there were no reports of anyone being in the building.

Crews will remain at the scene to dampen it down and to “ensure the building is stable”, it added.

“The cause of the fire is subject to investigation,” a spokeswoman said.

Crews were called to a fire in a derelict building to the rear of the Health Village at Bedford Hospital at 18.07 this evening (3 January 2019). 10 fire engines are in attendance to tackle the blaze supported by the Bedford & Luton Arial platforms. The incident is ongoing. pic.twitter.com/0xFiaMHmGk

East London NHS Foundation Trust, which runs the site, said patients and staff in Archer Unit and Cedar House were safe and added it was “business as usual this morning”.

About 60 firefighters tackled the blaze overnight.

Supt Nick Lyall, from Bedfordshire Police, said: “Operation now being scaled back but there will be some local disruption.”

Esther Snelson, whose house backs on to the site, said by early Thursday night the fire had reached the roof of the building.

She said firefighters appeared to be concentrating on preventing the blaze from spreading from the derelict wing to the modern building.

“If it doesn’t have to be demolished it would be amazing,” she said.

She said the building, that was formerly a workhouse, had been empty “for at least 10 years”.

Parts of Goldington and Kimbolton Roads were closed overnight but have since reopened.