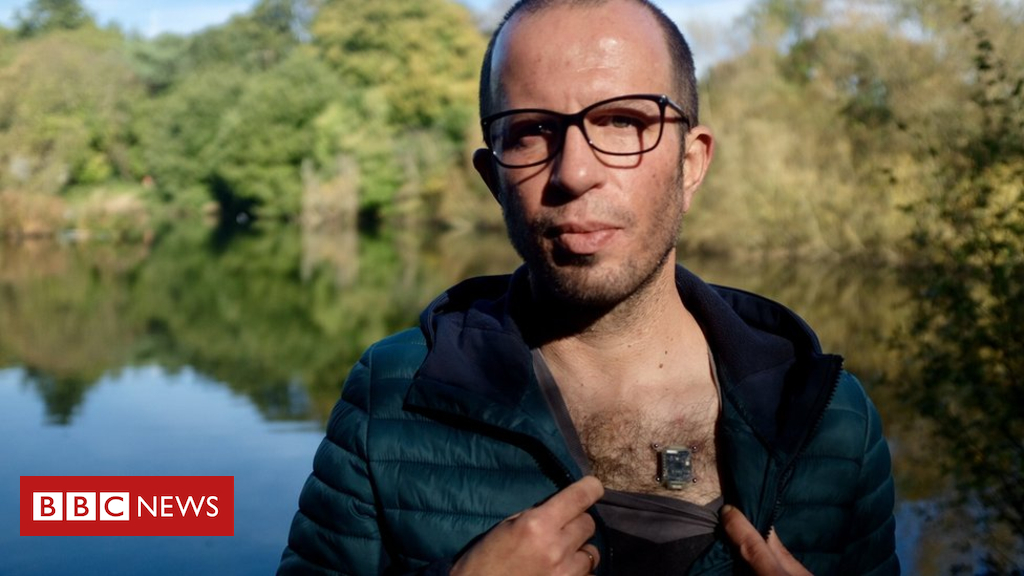 Biohackers want to make their bodies and brains function better by “hacking” their biology. The BBC’s Victoria Derbyshire programme meets the people who are inserting technology under their skin, adopting extreme diets and trying to change their DNA.

Liviu Babitz wants to create new human senses. Touch his chest and you feel his first effort, a vibration every time he faces north. If some animals can already sense direction, why shouldn’t we?

He can feel north because of an electronic implant on his chest called the “North Sense”. It includes a compass chip, Bluetooth connection and is attached to the skin with two titanium bars like a piercing.

Liviu, 38, is the chief executive of his own company, Cyborgnest, which designed the implant. He sees this as the first step in an entirely in-built navigation system and hopes to end what he calls “generation screen”.

“You walk on the street staring at your phone. You want to get somewhere but you have no idea what’s happened in the world around you because all you did was stare at the screen on the way,” he says.

“Imagine if you didn’t need it, you could navigate the world exactly like a bird and you would know exactly where you were all the time – blind people could navigate.”

His invention is highly unusual but actually seems tame in comparison with Rich Lee, a 40-year-old cabinet-maker from St George, in the US state of Utah.

Rich is a grinder – a biohacker that does extreme body modification. In his fingers, he has magnets and two near-field communication (NFC) chips that can be programmed to link to websites or open car doors, among other tasks.

He has a biotherm chip in his forearm, which can constantly monitor body temperature (but are usually used in pets), and headphone implants right in his ears.

He has also attempted “Crispr” – probably the most extreme and controversial kind of biohacking, a technique used by scientists to target and edit your genes.

While scientists are still working out the limits and dangers, Rich is experimenting at home and admits if he gets it wrong, he could kill himself.

“We’ve got all this genetic engineering knowledge and what I’m backing is the concept of being able to change your genes or get genetic modification like you would get a tattoo,” he says.

“I want to see a biologically fluid society where people can just augment these things.”

This home biohacking can of course go very badly wrong – Rich pulls up his trouser legs to reveal a selection of scars from implanted shin guards that got so swollen they had to be removed, which he did with pliers and no painkillers.

Luke Robert Mason, director of the Virtual Futures organisation, says there is a great deal of excitement around biohacking but “we are a long way from radically altering the human body in the sorts of ways they evangelise”.

“What we see today are the first steps by a brave group of pioneers. Today’s reality is a lot more experimental (and painful) than is often communicated to the public.

“There is a lot that can be learned from the outcome of their self-experimentation. Some have even argued that biohackers might increasingly be responsible in helping the advancement of wearables and wellness technologies.”

There are biohackers working with far less extreme – though still very experimental – methods.

Corina Ingram-Noehr, 33, an American events organiser living in Berlin, has a daily ritual involving technology, diet and more than 20 different vitamin supplements to try to keep in peak physical condition.

Next to a cupboard that resembles a chemist’s shop, she also has a Power Plate, which vibrates from 30 to 50 times a second to make her exercise more effective. And while vibrating, she uses an infrared light in an attempt to build collagen in her skin.

Corina can also be found walking the freezing cold streets of Berlin with bare legs. She calls this her cheap biohack version of cryotherapy – or cold therapy – and admits the “cops on her street” think it is hilarious.

She discovered biohacking when recovering from a serious concussion that left struggling to speak. Her boss recommended trying medium chain triglycerides (MCT) oil, which helped her “head turn on” and acted as something of a gateway drug for biohacking.

“It opened the floodgates and I was like, ‘If this works, this one little thing works so well – like, what else can I do?’

“Biohacking for me is taking control of your own biology. It’s taking shortcuts to get to a place that you want to be – so shortcutting your health. That’s kind of how I think of it at least.”