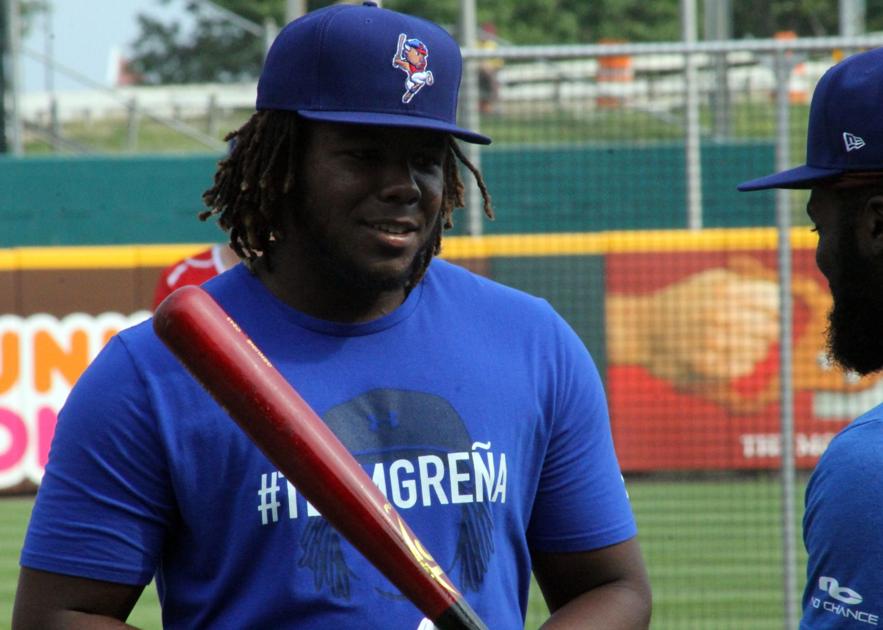 BUFFALO — The son’s approach is decidedly different from his father’s.

Vladimir Guerrero Sr. was one of the most aggressive hitters of his era, feared nearly as much for his prowess outside the strike zone as inside it.

The recent Hall of Fame inductee famously singled on a pitch that bounced before reaching home plate. He hit 126 first-pitch home runs, believed to be the most in Major League history.

Vladimir Guerrero Jr. possesses patience that belies his age. He’s disciplined, willing to wait, even at 19 years old and on the verge of a Major League call-up, for the right pitch before swinging.

In almost every other way, however, father and son are alike: from the name, to the number (27), to the swing, to the power.

It’s the same raw, almost harrowing ability that made Guerrero Sr. one of the game’s best and has Guerrero Jr. ranked as the No. 1 prospect in baseball, per MLB.com.

The younger of the two Guerreros happens to be playing an hour-and-a-half north for the Bisons, the Triple A affiliate of the Toronto Blue Jays. In a football and hockey town, he’s created a palpable buzz as perhaps the most exciting baseball prospect in franchise history.

“I don’t think we’ve had anyone (in recent memory) that’s been this much of an attraction,” said Brad Bisping, the team’s director of marketing and public relations. “The (Stephen) Strasburg start and (Matt) Harvey summer come to mind, but neither of those was quite like this.”

To Bisping’s point: On the same night the Buffalo Bills opened the preseason at home with an anticipated rookie quarterback, 7,937 fans flocked to Coca-Cola Field to watch the Bisons and their brightest star.

HIS FATHER remains his biggest influence on this expedited journey to the big leagues.

But the uncanny resemblance in Vladdy Jr.’s swing?

Most of his mechanics actually come from his uncle, former major leaguer Wilton Guerrero. That’s because during much of his son’s formative years, Vladdy Sr. was still himself a player.

“He’s worked with his dad, but that was in the last year,” said Danny Solano, the Blue Jays’ infield coordinator and Guerrero Jr.’s translator while in Buffalo. “Before that, everything he knows is coming from his uncle.”

Whatever the source, Vlad Jr. has already begun to punish pitching the way his father did.

The teenager dominated Double A this summer, hitting .401 with 14 home runs and 60 RBI in 61 games. In nine games since joining the Bisons (on the heels of his father’s enshrinement in Cooperstown, which he attended), he’s hitting .462 with two home runs and five RBI.

And on Thursday, in a 9-5 loss to Gwinnett, he didn’t disappoint, launching a missile of a solo home run to left field in the sixth inning and finishing 2-for-4 with a hard-hit single up the middle. He even displayed a similar arm strength as his father, making two bare-handed plays for outs at his dissimilar position of third base.

IN THE 10 days since his arrival, Guerrero Jr.’s life has been a frenzy.

The 6-foot-1, 200-pound infielder has had to acclimate to a new level while facing a media scrum at nearly every turn. He plays with the pressure of not only being the son of – and sharing a name with – an all-time great, but being considered the best young talent in his sport.

Buffalo sports fans are in a fortunate position. Their teams currently boast three of the most notable prospects in their respective games: Rasmus Dahlin, the No. 1 pick in the NHL Draft to the Sabres; Josh Allen, the No. 7 pick of the NFL Draft to the Bills and Guerrero Jr.

The young Vladdy, who was born in Canada, but raised in the Dominican Republic?

If he feels pressure to succeed under his circumstances, he doesn’t show it. When asked what it feels like to be a baseball star in a football city, he barely even registered that reality.

“Continue to work hard,” he said through Solano, “and hopefully the people continue to come to the ballpark to watch the baseball games.”

FOR THE moment, until he’s called up to finish the season with the Blue Jays or in these final 10 home games with Buffalo, all eyes are on Vladdy Jr.

The Bisons open the ballpark early so fans can watch him during batting practice. They’ve begun to make him available to the media pregame only once a homestand due to the volume of requests.

All the while, Guerrero Jr. continues to mash with the same torrid swing Guerrero Sr. was famous for with the Expos and Angels.

Ten days into his Triple A career, he’s been as good as advertised.

“It’s kind of one of those things where you hear how good these guys are and you say, ‘OK, we’ll see,’” Buffalo manager Bobby Meacham said. “That’s kind of where I’m at being in this game for so long. But I’m liking what I’m seeing; I’m sure everybody does.

“It’s pretty impressive, not only the results, but the approach he takes at the plate, on the field, pregame, on the bases, especially.”

He added: “You can tell that a player cares when he runs the bases well. If he’s thinking about himself, they slack off on the bases. He’s been running hard … that’s a player that’s a pretty good player that cares.”

In a way, it’s probably a good thing that Guerrero Jr. learned mostly from his uncle.

Solano was watching a TV show in the Dominican Republic a few weeks back in which Guerrero Sr., a native, was asked if he’d ever want to be a hitting coach.

“And be said no, because he can’t teach a hitter how to hit bad pitches,” Solano recalled hearing. “It’s something that he learned to do on his own.”

Unlike his father, Guerrero Jr. has a plate discipline that, at 19, “you don’t see very often,” Solano said.

You can bet, however, that neither the Bisons or Blue Jays would be mad if he winds up emulating Vlad Sr. in every other way.