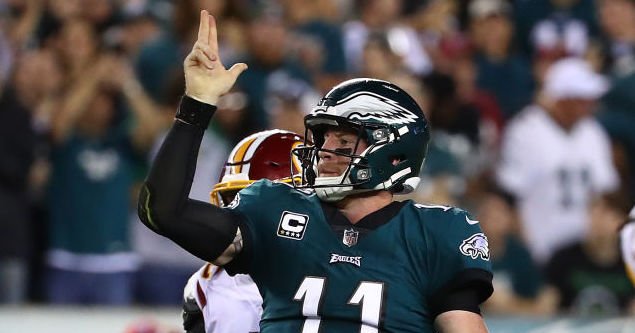 Carson Wentz was the front-runner for MVP of the National Football League in just his second NFL season. Sports Illustrated continued to add to Wentz’s return from a torn ACL by placing him on the cover for their NFL preview edition (one of four regional covers by the magazine).

Makes sense, since the Eagles are Super Bowl champions. Sports Illustrated has the Eagles winning the division at 11-5, a full three games over the New York Giants and Dallas Cowboys (who they have at 8-8). The Redskins are picked to finish last at 5-11.

Sports Illustrated had the Eagles losing to the Saints in the NFC Wild Card Game. The Falcons were predicted to win the Super Bowl, beating the Pittsburgh Steelers in Super Bowl 53.

Here’s the cover of Sports Illustrated with Wentz on it:

Four of the five Saints losses in the regular season were to teams with a combined record of 49-17 (New England Patriots, Minnesota Vikings, Los Angeles Rams, Atlanta Falcons). Common sense indicated they couldn’t match up to teams that played at or above their level. The Saints biggest wins were against the Panthers, which happen to be in their division, beating them three times. In fact, the Saints were 1-5 against 10-win football teams not named the Panthers last season with all those losses coming on the road.

The preseason is here as the Eagles are determined to keep the Vince Lombardi Trophy in Philadelphia! Get set for the most exciting season in Eagles history! Make sure to stay in the loop for all Eagles news throughout this journey — take five seconds to sign up for our FREE Eagles newsletter now!

Somehow, Sports Illustrated believes the Saints are going to be the Eagles at home this year…even through the Eagles are also better.

The Eagles have quite a few players on the active/Physically Unable to Perform list and have a few other players currently on the mend as the season opener is 16 days away. Alshon Jeffery and Tim Jernigan are on the PUP list while Carson Wentz and Nelson Agholor are currently preparing for Week 1 (Wentz rehabbing from ACL surgery).

Corey Clement and Mack Hollins are also injured, but their injuries appear day-to-day. On the defensive side of the ball, the Eagles are relatively healthy outside of Jernigan.

An excellent sign for an Eagles defense that finished fourth in points allowed per game (18.4) and fourth in yards allowed per game (306.5) in 2017. The Eagles were third in opponents third-down conversion percentage (32.2%) and first in opponents fourth-down conversion percentage (22.22%). Philadelphia was also first in the NFL in rush defense (79.2 yards per game). This defense also added Michael Bennett and Haloti Ngata on the line along with drafting Josh Sweat and Avonte Maddox with Sidney Jones and Jordan Hicks returning at 100 percent.

The Eagles third-ranked offense added Mike Wallace to its receiving corps and Dallas Goedert at tight end. Philadelphia also is deeper at running back with the return of Darren Sproles and will return Jason Peters on the offensive line (ACL and MCL surgery). The Eagles are also deeper in the trenches with Halapoulivaati Vaitai as the No. 3 tackle and Matt Pryor as the No. 3 guard.

The Eagles are better in 2018 than in 2017, but the national media still isn’t convinced. Philadelphia will gladly take the “underdog” mentality heading into 2018.