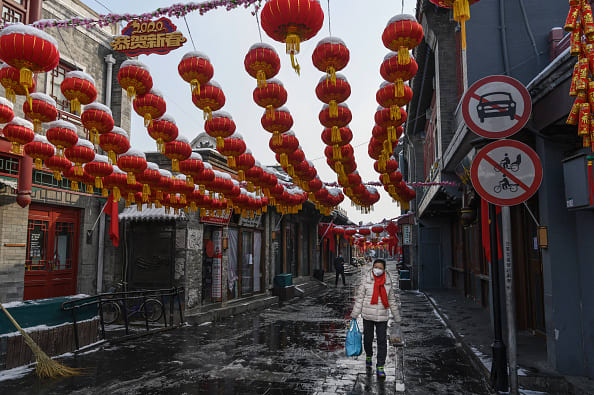 A Chinese woman wears a protective mask as she walks in a nearly empty and shuttered commercial street on February 7, 2020 in Beijing, China.

Business activity in China may look like it’s at a standstill amid the COVID-19 outbreak, but investors should start planning their next moves, experts said on Thursday.

“China is still China, the economy is still the economy, the consumers are still consuming,” said Frank Lavin, CEO of Export Now, a digital solutions company.

“Whatever the initial logic was that might have propelled you to go to the China market six months ago still holds today — even though we are the middle of some very bad weather,” said Lavin, a former U.S. ambassador to Singapore under the George W. Bush administration.

Although China’s economy this year will be hit by the ongoing health crisis, it would “still be a very nice year for the Chinese GDP,” said Lavin. China posted 6.1% GDP growth in 2019.

Lavin said he thinks there could still be a few more weeks of bad news after China “got off to a very bad start” handling the new coronavirus crisis. But Chinese authorities are “more or less getting their arms around it” now, Lavin told CNBC’s “Capital Connections.”

“No company welcomes this kind of turmoil,” Lavin said. “But most people (who) are looking at China, thinking about China are almost by definition, taking a long-term view,” he said.

Indeed, investors should now be thinking about their strategies post-epidemic, said Kent Kedl, head of Greater China and North Asia at Control Risks, a consultancy.

“In the middle of a crisis, it’s always time to think about your recovery — but companies rarely do that. It’s understandable, they are just trying to get through the misery they are in the middle of,” said Kedl.

“I think it’s going to be a very frothy environment once we start pulling out of this,” he said.