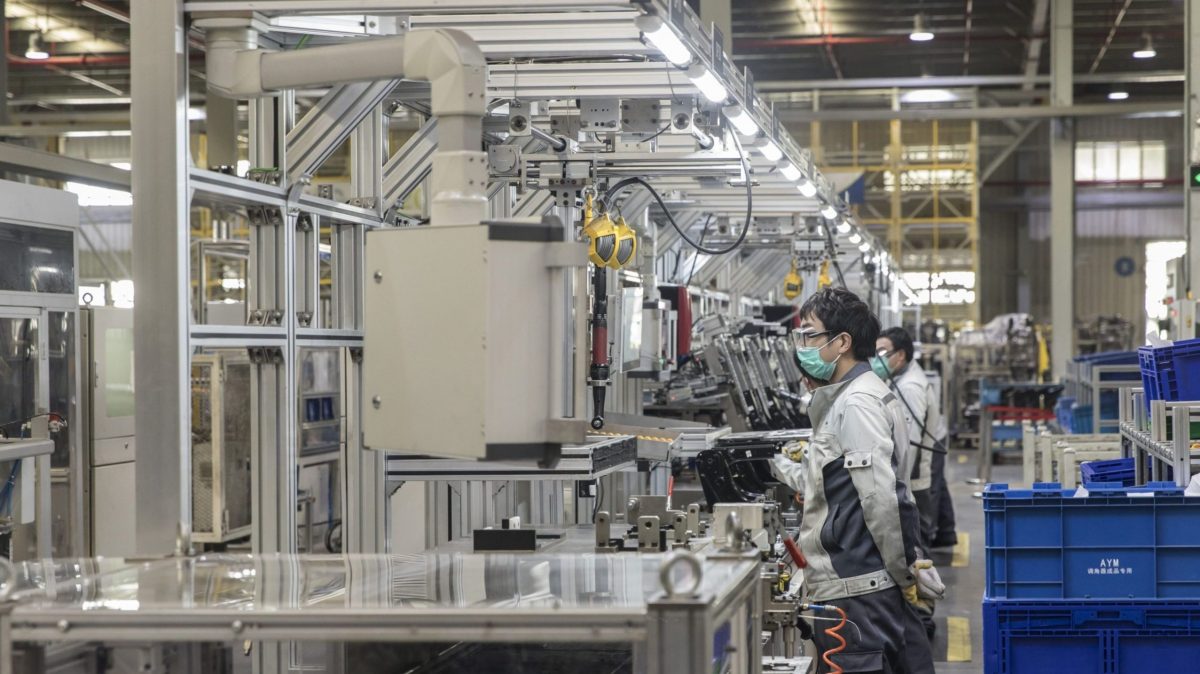 
Beijing/Shanghai: While much of the world’s output is grinding to a halt because of the coronavirus, China is slowly emerging from its shutdowns by restarting production at factories and resuming some flights.

A recovery in the world’s second-largest economy provides some relief for global manufacturers in the months ahead as the outbreak continues to wreak havoc in Europe, U.S., India and Latin America.

Employees are returning to work, production lines are starting to roll and even the original outbreak epicenter of Wuhan is ending its lockdown soon. Car sales in China probably hit a bottom last month and are set to gradually rebound as the spread of the virus slows and consumers return to shopping, an auto industry group said this month.

“Real-time indicators show that China is re-starting its industrial complex,” analysts at Sanford C. Bernstein said in a note Tuesday. “Clearly the re-start is at an early stage, but things are gradually improving.”

At the nation’s airline industry, whose slump last month decimated its massive aviation market to a size smaller than Portugal’s, carriers are slowly restoring flights. Scheduled capacity rose 2.4% last week from the previous seven days to 9.2 million seats, while all the other top 10 markets in the world continued to decline, according to flight-data analytics firm OAG Aviation Worldwide.

Other signs include Chinese subway traffic increasing 21% last week, and online sales of large appliances rebounding in both volumes and average prices on a week-to-week basis, according to Bernstein.

Much of China was closed for weeks starting in late January after the outbreak extended a Lunar New Year holiday break. Here’s where some manufacturers in China are now with their ramp-ups:

Production at BMW AG’s Shenyang plants resumed on Feb. 17, and the German carmaker said it is confident the Chinese government will manage the crisis and defeat the epidemic. “We remain confident in the medium and long-term business outlook of our No. 1 market worldwide,” the company said in an emailed response to questions.

Also read: How the coronavirus recession is like World War II

The company said its manufacturing operations in China have restarted production under the approval of the relevant regional and national governments. More than 90% of its dealers and 95% of staff at the joint venture with Guangzhou Automobile Group are back online, and “the overall manufacturing and commercial operations are gradually resuming business,” Fiat Chrysler said.

The U.S. carmaker said its Chinese plants resumed production on Feb. 10 and are continuing to ramp up. Both its local joint ventures have achieved almost 100% recovery, though some Hubei or Wuhan employees are still under travel restrictions.

Foxconn, an important manufacturing partner to global names from Apple Inc. to HP Inc., is steadily getting back on its feet. Foxconn unit Hon Hai Precision Industry Co. said this week it’s back at full seasonal staffing earlier than anticipated, suggesting the Taiwanese company is confident of resolving the labor shortages and logistical hiccups that threatened to smother the flow of iPhones and gadgets to America and the rest of the world.

The Japanese carmaker said capacity is gradually recovering at its two Chinese ventures and so far they haven’t had problems caused by parts shortage there due to strain in supply from outside of China.

All Nissan Motor Co. factories in China have resumed work and production is set to align with government mandates, the company said.

All SAIC Motor Corp. plants in China have resumed production, with the company adjusting output levels based on demand. The carmaker has contingency plans to secure parts in case of any disruptions, it said.

Tesla Inc.’s factory in China has recovered from a virus-related shutdown better than many in the industry, helped by aid from local authorities. After resuming operations on Feb. 10, the plant — Tesla’s only outside the U.S. — has surpassed the capacity it had before the shutdown, reaching a weekly production of 3,000 cars, a company representative said Friday.

The Japanese auto giant’s plants in Guangzhou and Changchun have returned to their regular two-shift schedule, while in Tianjin, all production lines are back to two-shift arrangements except one that remains at one shift. The Chengdu plant is sticking to its usual one shift. More than 98% of Toyota’s dealerships are open again, and the company has no plans as of now to adjust its 2020 China sales target, it said.

Almost all production sites are back to operational, Volkswagen AG said. Challenges include a slow national supply chain and logistics ramp-up, as well as limited travel options for employees. All of Volkswagen and its partners’ component production sites are producing again, it said. The company is adjusting its output levels based on current conditions, such as by moving to one shift instead of two previously, according to the German company. – Bloomberg

ThePrint is now on Telegram. For the best reports & opinion on politics, governance and more, subscribe to ThePrint on Telegram.