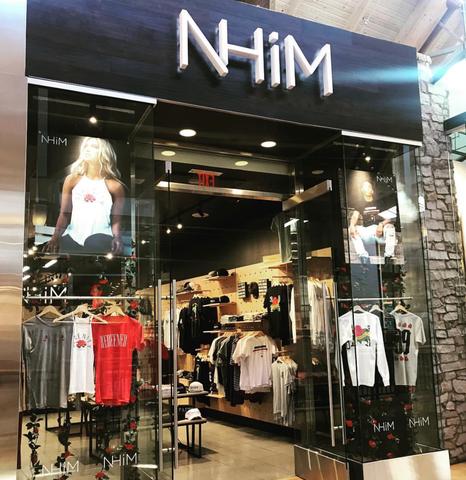 A husband-and-wife team who opened a Christian-themed apparel store in Colorado nearly four years ago is moving to Redding where they will open their second location.

They believe Bethel Church’s presence and other Christian congregations make Redding a divine spot to grow their business.

NHiM is expected to open this fall in Discovery Village on Dana Drive between Jamba Juice and Manhattan Bagel. Most recently the space was a Complete Nutrition store, before that YAKS and before that Starbucks.

“To sum it up, we are a premium Christian clothing brand for men & women — promoting others to become everyday missionaries through casual conversations. These conversations can often happen over something as simple as a t-shirt or hat,” the company’s website said.

Nancy Garcia, who heads up marketing for the business, said employees reach out to every customer that comes through the door.

“We pray with almost every customer that walks through our door. We let employees know to please ask if they need a prayer after their purchase,” Garcia said.

Garcia said the Allens also feel they are serving a greater purpose.

Proceeds from the sale of apparel go to causes like helping children and underprivileged families, Garcia said.

In 2016, NHiM opened a home for 12 children in Ibrahimpatnam, India, the website said.

The Allens discovered Redding during visit through California. Diane Allen had lived in California before coming to Colorado.

Among the people they met while visiting was a Bethel Church member who invited them to visit Redding and check out the church.

“They stayed up there for a weekend, they went to Bethel Church, went to a couple of services. They felt that this was the next step they needed to take,” Garcia said.

Like the Allens, Garcia also is moving to Redding.

“We are really amazed at the community, how friendly the people are. It’s just more of that close-knit community,” Garcia said.

NHiM’s store in Colorado is in the Denver suburb of Lone Tree in the Park Meadows Mall. The Allens opened in a kiosk before moving into a full-sized retail space.

The Allens also are looking to open more stores, considering cities like Dallas and Nashville, Tennessee.

Garcia said the Allens have signed a short-term lease with the agreement that if things go well over the next several months, they will ink a long-term lease.

Fence goes up around Sears

Drive by the Mt. Shasta Mall and you see a fence surrounding the old Sears store on the southwest side of the shopping center.

Any day now crews will start demolishing a portion of the store to make room for new tenants, including Sprouts Farmers Market and HomeGoods.

A fence has gone up around the old Sears store in the Mt. Shasta Mall. A portion of the building will be demolished to make room for new stores. (Photo: David Benda/Record Searchlight)

For the record, the entire old building will not be demolished.

“The permit they have right now is to do the initial demolition work, mainly removing only the westerly portion, about 10,000 square feet of that building, the part that fronts Hilltop Drive,” said Jim Wright, who heads up Redding’s building department.

What remains of Sears will be used as the bones to create the 72,400 square feet of new retail space that will feature Sprouts, HomeGoods and four other stores.

In addition, an 11,000-square-feet building at Dana and Hilltop will be built for a fast-food restaurant (Chick-fil-A?) and retail store.

There are proposed designs for breaking apart the current Sears location at the Mt. Shasta Mall. This is a view from Hilltop Drive. (Photo: AI Design Group)

And remember how you could access the mall through Sears?

Shoppers going to Sprouts, HomeGoods or the other stores in the new space will have go back outside to get into the mall, according to plans Wright’s department has received.

This is an architectural rendering of a building proposed for the corner of Hilltop and Dana Drive near Sears. (Photo: AI Design Group)

I reached out to Rouse Properties, which owns the mall, for an update on projected openings for Sprouts and HomeGoods and if any new tenants have been signed on.

In February, mall ownership said it expected HomeGoods and Sprouts to open in spring of next year.

If there was any doubt, the new Grocery Outlet in west Redding will be a second location for the bargain supermarket.

As I reported earlier this week, Grocery Outlet will open in the old Tops Market building in Sunset Marketplace on Eureka Way.

Coyle does not know when the second location will open due to the permitting process and the extensive remodel the building will undergo.

Best estimate is it will take about a year to get the new location ready for customers, he said.

“Obviously our hearts go out to the Redding community, especially the people not far from our second location and the devastation that occurred there,” he said of the Carr Fire, which destroyed many neighborhoods in west Redding. “We extend our heartfelt sorrow and best wishes to the community.”