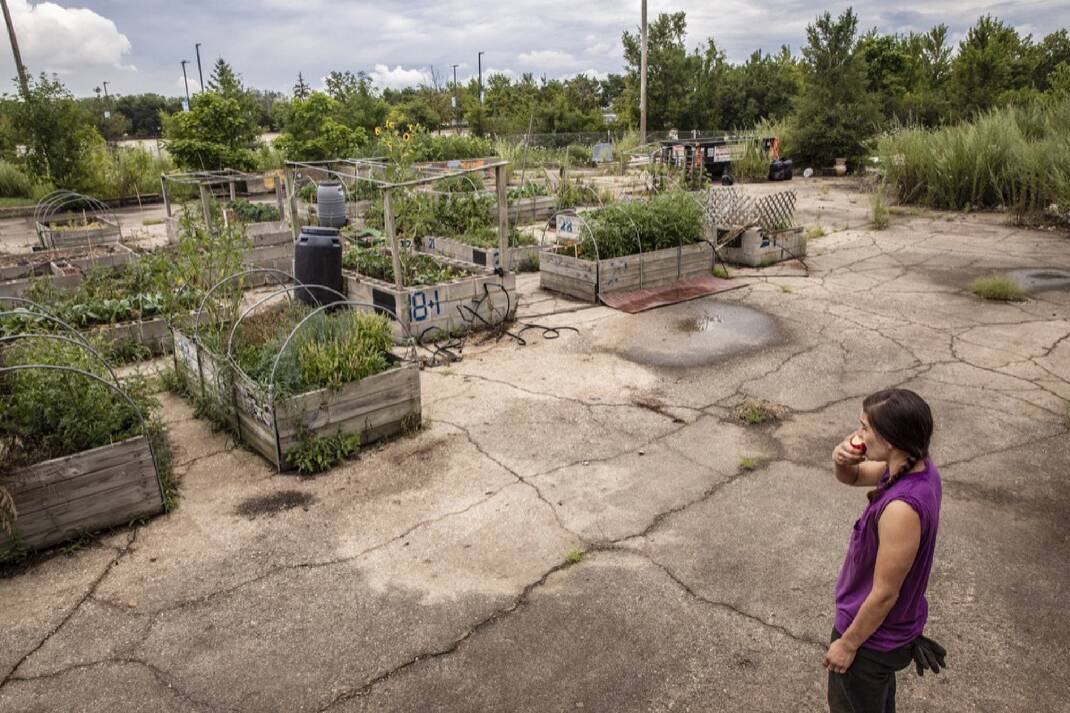 ATLANTA (AP) — On his way home, Darnell Eleby paused before boarding the commuter train in Atlanta’s Five Points station and maneuvered his wheelchair to a stop not seen on many mass transit platforms: a fresh food stand stocked with colorful fruits and vegetables. Aided by a volunteer, he filled a basket with bananas, apples, corn and squash and paid with a health program voucher.

“It helps you out when you can’t get to the store,” Eleby said.

Large cities across the country are using this multipronged approach to bring healthy diets to “food deserts,” mostly low-income neighborhoods located miles away from the nearest supermarket. They hope not only to reduce rates of diabetes, high blood pressure and obesity, but to encourage community activism and empowerment.

“We’re doing this out of … responsibility toward our community,” Safia Rashid said of the garden she and her husband, Kamau Rashid, have tended on Chicago’s South Side for the past 14 years.

The 44-year-old mother said the couple began gardening when their oldest son was 3 years old, to fight “‘food apartheid’ … folks deliberately disinvesting in this community, removing healthy food away from us,” Safia Rashid said.

The Rashids’ garden grows at the South Chicago Farm, a 14-acre (5.6-hectare) site developed in 2015. It’s one of eight such farms in Chicago operated by the nonprofit Urban Growers Collective.

In Atlanta, many of the tomatoes, peaches and peppers found in bins at the Fresh MARTA Markets come from food grown in the city and nearby farms, said Hilary King, of the nonprofit Community Farmers Markets, which partners with the Metropolitan Atlanta Rapid Transit Authority to run the stands. Launched in 2015, the MARTA markets are located at different stations during the week.

Nonprofits also have teamed up with ridesharing company Lyft to provide up to 300 low-income families with discounted rides to farmers markets and grocery stores in Atlanta. The six-month pilot program, called Access AgLanta, began June 1, inspired by a similar Lyft partnership in Washington, D.C.

“What we have often heard over the years is that transportation is a huge barrier to food access,” said Alysa Moore, program manager for Georgia Fresh For Less, which provides state residents who receive food stamps with financial assistance to shop at farmers markets.

Eleby relies heavily on the transit platform markets. Without them, he said, he’d be forced to rely on a small scattering of stores in his low-income neighborhood in southwest Atlanta where he said he has to smell food or examine it for mold before buying it. The food there, he said, isn’t “like it’s supposed to be.”

As of 2015, roughly 22% of Atlanta’s population was living in a low-income community more than a mile from a food store, according to the U.S. Department of Agriculture.

Christopher “Mad Dog” Thomas, 34, who grew up in the Altgeld Gardens neighborhood on Chicago’s South Side, said he has suffered from “‘food desert eating disorder,’ where all you can afford to eat is candy.”

Thomas and his wife, Kathryn Gatewood, make a weekly trip outside their neighborhood to a store called Pete’s Supermarket, which Kathryn Gatewood describes as “the black or Hispanic Whole Foods.”

“We spend almost 40% of our paychecks combined to ensure a healthier diet for our kids,” she said, adding that it is a better alternative than buying bad food from the “dusty shelves” of corner stores in Englewood.

The Chicago nonprofit Inner-City Muslim Action Network has launched “The Corner Store Campaign” to change that.

Sami Defalla, who runs the Morgan Mini Mart in Englewood, has been an active partner with the campaign for more than two years. Defalla has created a “green zone” in the store where shoppers can purchase inexpensive fresh fruits and vegetables.

“I wish I had a bigger platform to offer more … to my customers,” Deffala said.

The Muslim Action Network also operates a health clinic where patients can see a dietitian free of charge and receive coupons for free produce at the nearby farmers market. Every Friday, the group hosts a farmers market where residents can connect with local urban farmers.

As a volunteer in a community garden in Atlanta, Celeste Lomax is finally able to take fresh produce home to her low-income neighborhood, which is located about 4 miles (6.4 kilometers) away from the nearest supermarket.

“We have a right to eat healthy like everyone else does,” she said.