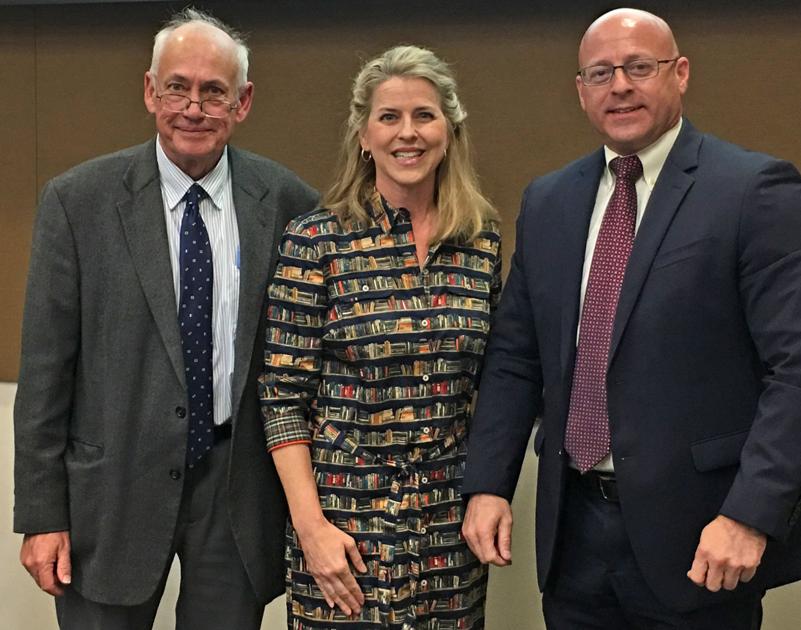 Pamela Cambre Lakvold received the Spaht Scholar Award on Nov. 21 from the East Baton Rouge Parish Library Board of Control.

Lakvold has a bachelor’s degree from Nicholls State University and a master of library and information science from LSU. She has worked for the East Baton Rouge Parish school system for 28 years and eight years at Westdale Heights Academic Magnet School.

The Spaht Scholar is an annual award established by The Will and Leona Huff Fund and presented by the East Baton Rouge Parish Library’s Children’s Services, that recognizes an exceptional educator who makes a difference in the lives of their students by encouraging the love of learning.

For information about the award, call Children’s Services at (225) 231-3760. The library website is ebrpl.com.

Altrusa meets with District Four board

The Altrusa Club of Baton Rouge welcomed the District Four board members the weekend of Nov. 2.

The district board held its midyear board meeting at the Holiday Inn South in Baton Rouge, site of next year’s district conference. Conference chairs Jackie Robbins and Marti Didier met with the board Saturday morning to update members on conference plans. A dinner with the board and Baton Rouge club members was held at Drusilla Seafood Restaurant.

Community: LSU law professor talks about jurists and students, including the governor

Yvonne Lewis Day told of the many connections of Native Americans with presidents and first ladies when the John James Audubon Chapter of the Daughters of the American Revolution met Nov. 18.

Such connections go back to John Quincy Adams and the Treaty of Ghent to end the War of 1812. She said visits to Native American reservations have been made by only four presidents — Calvin Coolidge, Franklin Roosevelt, Bill Clinton and Barack Obama. Woodrow Wilson’s wife, Mary, renamed 82 captured German vessels using tribe names. Day showed the “first ladies” quilt she made by hand.

Vice Regent Sallie McKann displayed the chapter weaving project that will be entered in the National American Heritage Contest. Over a dozen chapter members worked on the weaving featuring colors used in the fight for women’s right to vote.

Project Patriot Chairman Julie Noland thanked everyone who helped pack 447 Christmas stockings that will be shipped overseas to active duty military. Plans were finalized for the Wreaths Across America Statehouse ceremony on Dec. 9 and the Christmas party on Dec. 16 at the Raven’s Outreach Center. The chapter heard plans for a field trip to the World War II Museum in January and a field trip to the Iberville Parish Museum.

DAR membership is open to women 18 and older who can prove lineal, bloodline decent from an ancestor who aided in achieving American independence. She must provide documentation for each statement of birth, marriage and death. To find out more about the DAR or the Audubon Chapter, contact [email protected]