Cookie dough spaghetti is possibly the weirdest food of 2018 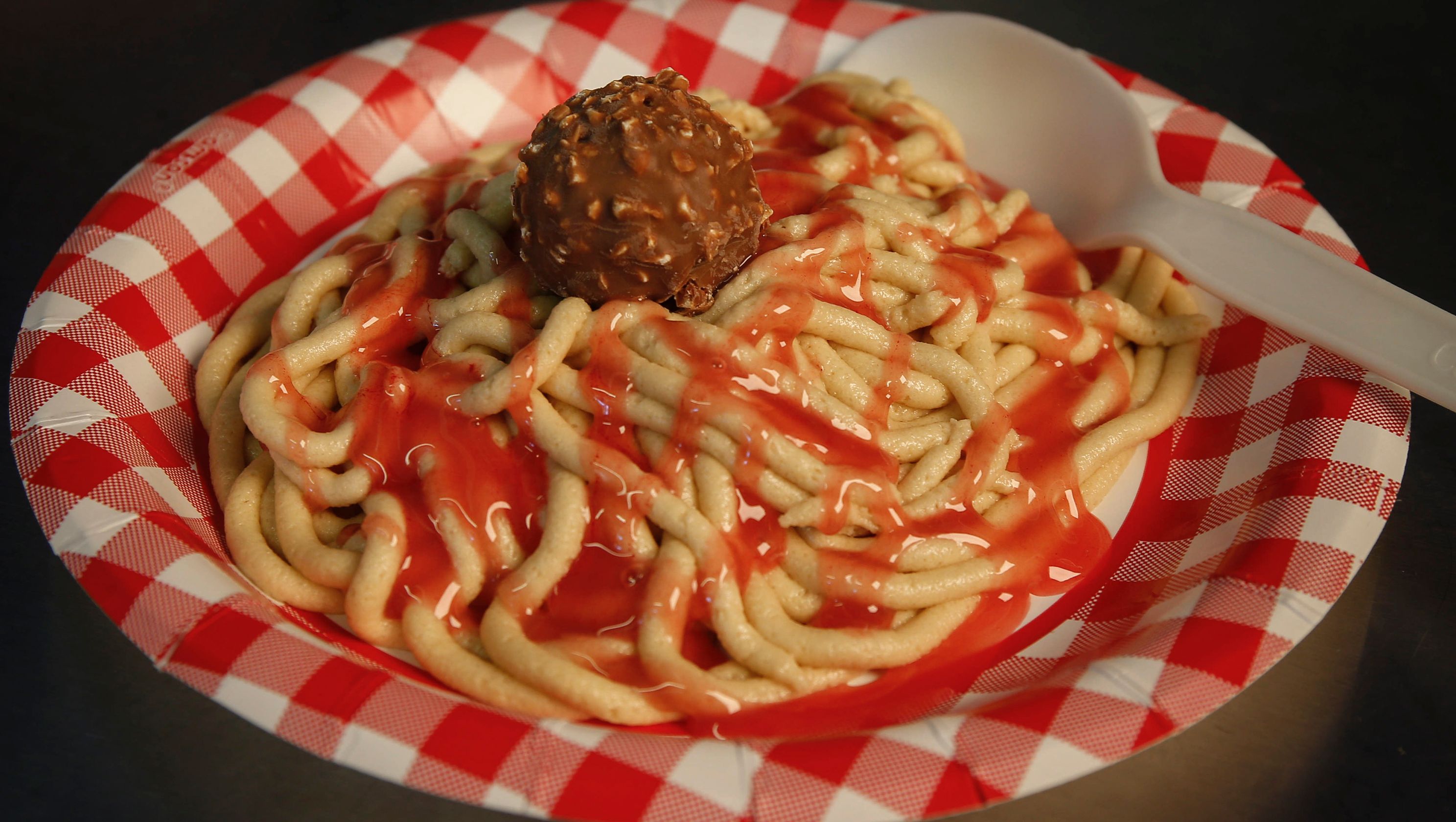 The Iowa State Fair is known for some strange and odd culinary items, and 2018 is no exception. Introducing cookie dough spaghetti.
Des Moines Register

A plate of Cookie Dough Spaghetti, co-created by Dennis Mitchell of Coralville, will be sold at the Dipped In Chocolate ice cream stand at the Pavilion on the Iowa State Fair grounds.(Photo: Bryon Houlgrave/The Register)Buy Photo

When the Iowa State Fair released its list of new foods for the year, one particular offering rolled off the tongue and struck a strangely nostalgic note for me:

No, my mother never served a dish like this. Rather, she strongly diverted me away from the malleable magic of cookie dough whenever I tried to scarf down the sugary, raw, goodness.

But that raw craving is the childhood feeling that cookie dough connoisseur Dennis Mitchell believes he’s tapped into with his Iowa State Fair stand, “Dipped in Chocolate.”

For the last 10 years, the stand’s most popular food item has been the chocolate-dipped chocolate chip cookie dough on a stick.

It’s an edible, egg-less, glob of cookie dough made from heated flour. That means your mother can’t chide you for potentially ingesting salmonella.

“People just seem to love cookie dough,” Mitchell said. “We always wanted to eat that raw cookie dough and this brings that to life.”

Dennis Mitchell of Coralville makes a plate of Cookie Dough Spaghetti at the Dipped In Chocolate stand at the Pavilion on the Iowa State Fair grounds. (Photo: Bryon Houlgrave/The Register)

Outside of the fair, Mitchell works full-time in Iowa City as a trust officer. But when it gets closer to the fair, he transforms into a “part-time carney” where he and his business partner, Kevin Schultz, of Minneapolis, pitch ideas and plan on the next hit food item.

This last winter, the pair of Des Moines natives gathered over dinner and chatted about what new food they would like to put out.

Schultz suggested spaghetti — a twist on a classic, recognizable dish beloved by households across America.

“I was a little skeptical at first, but we pride ourselves in trying something new,” Mitchell said.

The process of creating cookie dough spaghetti took months. Mitchell’s family members own D.R. Deli & Desserts at Valley West Mall in West Des Moines where they experimented with the dough, sauce and “meatball.”

It took time to find the right combination, but here are the details:

There were some hit and misses while Mitchell and Schultz were experimenting before the final produce came about. They tried strawberry and cherry syrups for the sauce, but decided chocolate tasted the best. They experimented with malt balls for the meatballs, but a Ferrero Rocher chocolate instead added a fancy touch.

If Cookie Monster worked as a chef at Olive Garden, this is the fun fair food he would make that people would lineup to try.

You don’t twirl it with a fork, so don’t imagine any Lady and the Tramp scenarios. Instead, dive into a sugary scoop of noodles with a spoon.

If you can’t handle a giant sugar rush, share it with a friend.

Also, don’t search for it on Google because you won’t find anything like it except at the Iowa State Fair.

“People always get a good laugh,” Mitchell said. “It’s fun to do. We use it as an excuse to get together.”

Location: Perimeter of the Pavilion (look for the blue canopy)

Other new food: If cookie dough spaghetti doesn’t appeal to you, Dipped in Chocolate is also debuting a cookie dough sundae with candy toppings for $5.