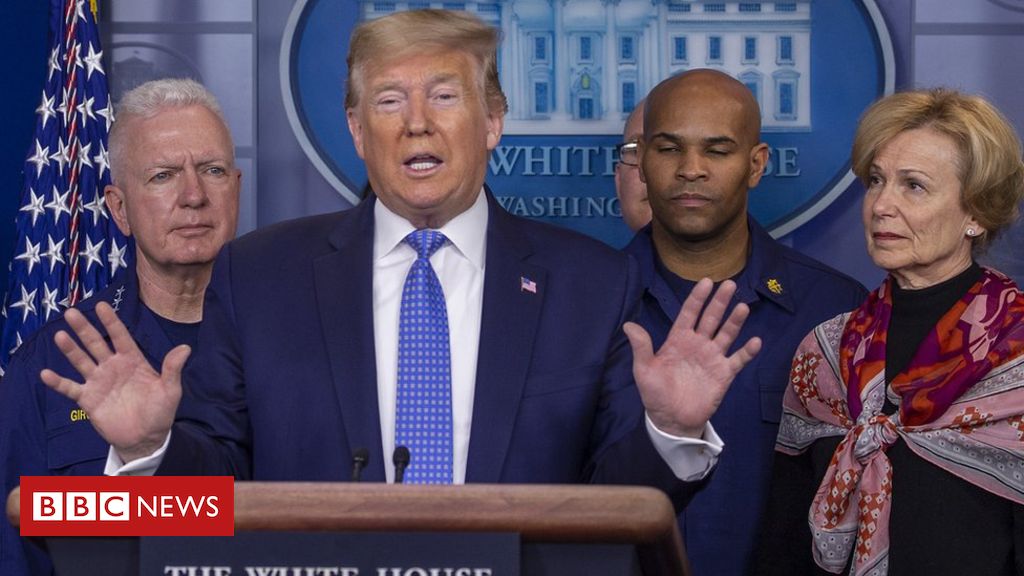 The Dow Jones Industrial Average of 30 major American companies fell more than 4.5% on Friday, erasing all the gains it had made since Donald Trump became president in January 2017.

The drop helped to finish the worst week on Wall Street since 2008, with all three indexes down at least 12%.

The falls come as authorities tighten restrictions on activity in an effort to slow the spread of the coronavirus.

Illinois also made a similar move, while California earlier mandated that its residents shelter in place.

They have now fallen more than 30% from their recent records.

Mr Trump has taken credit as the share indexes climbed during his presidency – gaining nearly 50% as of last month. He has written about them on Twitter at least 131 times, according to a tally by the New York Times.

At briefings this week, Mr Trump has said he is not worried about the economy in the long-run, arguing that business will bounce back after the pandemic eases and restrictions can be relaxed.

For now, however, the upheavals are severe.

Unemployment claims in the US surged 30% this week, as thousands of people lost their jobs, while in the restaurant industry alone as many as 7 million jobs could be cut in the next three months, according to estimates by the National Restaurant Association.

Delta Air Lines on Friday said it would lose $10bn in its second quarter, while United Airlines warned that it would cut jobs starting in April if the government does not provide relief funding. Both firms saw share prices fall about 30% this week.

Coca-Cola lost more than 8%, after warning the virus had upended its growth forecast, as sales to theatres, sporting venues and restaurants evaporate.

The market moves came as the state of New York ordered staff at all “non-essential” businesses to remain at home as the number of coronavirus cases continues to rise.

The move expands earlier restrictions and comes as California on the west coast said its nearly 40 million residents should “shelter in place”.

The US has confirmed more than 14,000 cases of the coronavirus, including more than 7,000 in New York.

The surge has started to strain its health care system.

“This is the most drastic action we can take,” New York Governor Andrew Cuomo said,

New York said pharmacies, grocery stores, banks and shipping firms were among those exempt from the order, which goes into effect on Sunday.

Many places have already been forced to shut, including schools, shopping centres, and theatres.

Mr Cuomo also issued additional rules for the state’s 19.5 million citizens, saying healthy people who are not at risk may go outside for exercise and to go grocery shopping, but should otherwise remain at home.

Dr Anthony Fauci, the director of the National Institute of Allergy and Infectious Disease, who has been a leader of the national response, said he supported the move.

“Please co-operate with your governor,” he said at the White House’s daily coronavirus briefing.

The US also said it would bar non-essential travel between the US and Canada, from midnight.

However, US President Donald Trump said he did not think shelter in place orders needed to be expanded nationally, noting that many states have far lower infection rates.

“They’re watching it on television but they don’t have the same problems,” he said.

Restrictions aimed at reducing the spread of the coronavirus have expanded rapidly this week and are already having a devastating economic effect, with the number of Americans seeking unemployment benefits surging more than 30% this week.

Economists are predicting a sharp contraction in economic growth in coming months, and have warned that millions of jobs are at risk.

Congress is working on a more than $1tn relief bill, that is expected to include direct payments of more than $1,000 for each American who earns less than a certain amount. It would also include millions for businesses affected by the pandemic, such as airlines and hotels.