First responders from IU Health Bloomington hospital pick up a woman at the corner of 1st St and S. Walnut St who was sitting slumped over, and was saying she was having trouble breathing, and other COVID-19/Coronavirus symptoms in Bloomington, Ind.

This is a live blog. Please check back for updates.

The data above was compiled by Johns Hopkins University as of 11:45 a.m. Beijing time

All times below are in Beijing time.

Indonesia’s health ministry reported 12 more coronavirus deaths and 130 new cases Sunday, bringing its total reported death count to 114 so far and its case count to 1,285. A health ministry official told media that more than 6,500 people had been tested across the country of 264 million.

Australian Prime Minister Scott Morrison declared a six-month moratorium on evicting tenants unable to pay rent because of financial distress caused by the coronavirus crisis. He also said people “must stay home” unless going out for essential activities including grocery shopping, going to the pharmacy, work that cannot be done remotely or exercising.

Saudi Arabia closed off entry and exit into the coastal city of Jeddah, the kingdom’s second largest city with a population of roughly 3.5 million. It also brought forward Jeddah’s curfew time to 3:00 p.m. local time from an initial curfew time of 7:00 p.m, state news agency SPA said Sunday. Curfew in other major Saudi cities is currently at 7:00 p.m.

3:34 pm: Qatar Airways will continue to operate as long as necessary: CEO

Qatar Airways will keep operating as long as necessary to get travelers home, CEO Akbar al-Baker told Reuters in an interview Sunday. He added however that the airline only has enough cash for a “very short period of time” and that it would eventually have to ask for help from the Qatari government, its owner.

Coronavirus cases in Germany climbed by 3,965 to 52,547 on Sunday, and deaths increased by 64 to 389, the country’s Robert Koch Institute for infectious diseases revealed.

Toyko confirmed 68 new coronavirus cases on Sunday, local broadcaster NHK reported, a record daily jump for the Japanese capital. Japan now has more than 1,700 cases and 55 deaths, excluding those on the quarantined Diamond Princess cruise ship that sat off its coast through the month of February.

Singapore’s health ministry said a 70-year-old patient has died on Sunday afternoon from complications related to the coronavirus. The country has recorded three deaths since the outbreak.

The man, a Singapore citizen, had a history of hypertension and hyperlidaemia, the ministry said in a statement. He was admitted to hospital on Feb. 29 and confirmed to have the virus on March 2, said the ministry, adding that he had been in the intensive care unit since then.

As of noon on Saturday, Singapore has reported 802 cases, according to the health ministry. — Yen Nee Lee

That brings the country’s tally to 1,388 cases and seven deaths, said the report. Thailand has the second highest number of confirmed cases in Southeast Asia behind Malaysia. — Yen Nee Lee

The number of deaths related to COVID-19 reached 30,847 globally, with fatalities in Italy crossing 10,000, according to the data. — Yen Nee Lee

The daily increase in cases in recent days was around 13% to 15%, down from last week’s 25% to 30%, said Morrison, adding that social distancing measures were working, according to the Reuters report.

Australia reported 431 new confirmed cases, bringing total infections in the country to 3,809 with 14 deaths, according to its health ministry.

Jim Dolan, the owner of NBA team New York Knicks, has tested positive for the coronavirus, the basketball team said in a Twitter post.

Dolan, the executive chairman and chief executive of Madison Square Garden Company, has been in self-isolation and is experiencing “little to no symptoms,” the post said. He continues to oversee business operations, it added. — Yen Nee Lee

10:26 am: Mexico asks residents to stay at home for one month

Mexico’s deputy health minister, Hugo Lopez-Gatell, has urged all residents to stay at home for a month to slow down the spread of the coronavirus, reported Reuters.

He added that the measure could be extended if needed, the report said.

Mexico has reported 848 confirmed cases as of Saturday, including 16 deaths, according to the report. — Yen Nee Lee

10:04 am: New Zealand records first death related to the virus

The woman who died was in her 70s and was initially diagnosed with influenza, said the Reuters report.

New Zealand reported 63 new cases of the coronavirus disease in the last 24 hours, taking its tally to 514, according to the country’s Ministry of Health. — Yen Nee Lee

The Centers for Disease Control and Prevention has advised residents of New York, New Jersey and Connecticut to “refrain from non-essential domestic travel for 14 days.” The advisory is effective immediately, CDC said in a statement.

It added that the advisory does not apply to those working in “critical infrastructure industries” such as trucking, public health, financial services and food supply. The governors of the three states have full discretion to implement the rules.

U.S. President Donald Trump had earlier floated the idea of quarantining the three states — which are hot spots of the coronavirus disease — but later said he will not seek to do so. — Yen Nee Lee

South Korea reported another 105 coronavirus cases, bringing the country’s total so far to 9,583, according to the Korea Centers for Disease Control and Prevention.

China’s National Health Commission reported 45 new cases of the coronavirus disease in the mainland, with all but one involving travelers from overseas.

The country also reported five additional deaths, all of which were in Hubei province, said the commission.

All times below are in Eastern time.

President Donald Trump said he will not seek to impose a quarantine on New York, New Jersey and certain parts of Connecticut, after floating the idea earlier in the day as way to contain the coronavirus from spreading out of hot spots where the disease has taken a particularly heavy toll.

Trump said he decided a quarantine wasn’t necessary after consulting with the White House task force and the governors of the three states. He has asked the Centers for Disease Control to issue a strong travel advisory, which will be administered by the governors in consultation with the federal government. —Spencer Kimball

New York Gov. Andrew Cuomo said Saturday he does not believe President Donald Trump has the authority to impose a quarantine on New York, New Jersey and parts of Connecticut to stop the spread of the coronavirus.

Cuomo, in an interview with CNN, said that preventing people from moving in and out of the tri-state would amount to a federally imposed lockdown, which he believes is illegal.

Cuomo suggested he could sue if the administration did follow through. “I’ve sued the federal government a number of times over the years. I do not believe it’s going to come to that on this,” he said. —Spencer Kimball 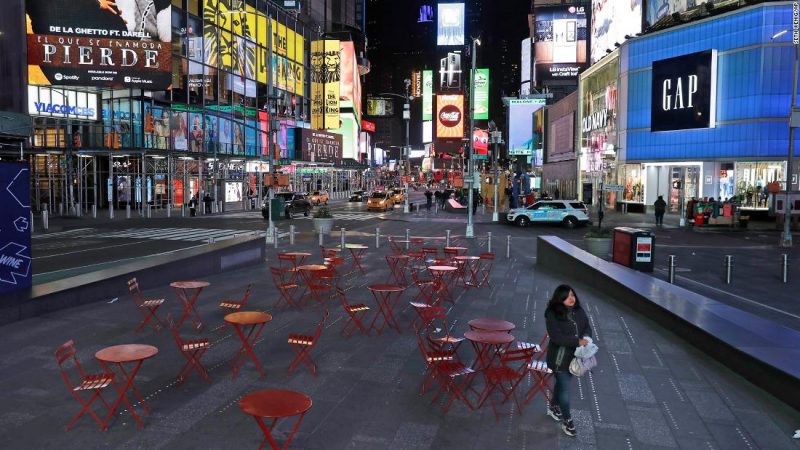