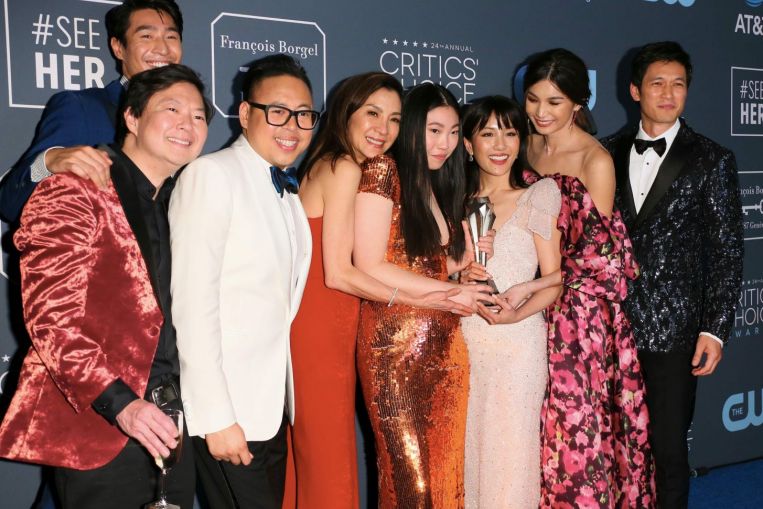 It was a solid turnaround for the movie after it had come up empty-handed a week ago at the Golden Globes – where it was vying for two prizes, including Best Actress for Constance Wu.

The victory marked another major breakthrough for CRA, which made news last year as the first blockbuster in 25 years to feature an all-Asian cast.

On Sunday, it was up for four prizes, beating also Deadpool 2, The Death Of Stalin, Game Night and Sorry To Bother You for the only statuette it won.

Korean-Canadian actress Sandra Oh – who bagged Best Actress in a Drama Series for Killing Eve – shared in the joy. She ran up to the CRA cast, hugged them and posed happily for photographs, reported the Entertainment Tonight portal.

The Critics’ Choice Awards, considered a bellwether of who will triumph at the Oscars on Feb 24, handed out Best Movie and Best Director prizes to Alfonso Cuarón for Roma, his love letter to Mexico.

Glenn Close proved her Best Actress win at the Golden Globes was no fluke when she once again picked up the same honour – but had to share it with Lady Gaga (A Star Is Born) in a tied result.

Lady Gaga, who broke down in tears when the result was announced, tripped on her way to the stage. But she regained her composure and sense of humour.

Referring to the piano music that plays when a winner drones on too long in an acceptance speech, she said: “It’s OK, I can still do this with a piano background.”

The spoils were also shared by Amy Adams (Sharp Objects) and Patricia Arquette (Escape At Dannemora) in the Best Actress in a Limited Series/TV movie category.

Claire Foy took home the #SeeHer award, presented to “a woman who pushes boundaries to help change stereotypes and recognise the importance of authentic portrayals of women across the entertainment landscape”.