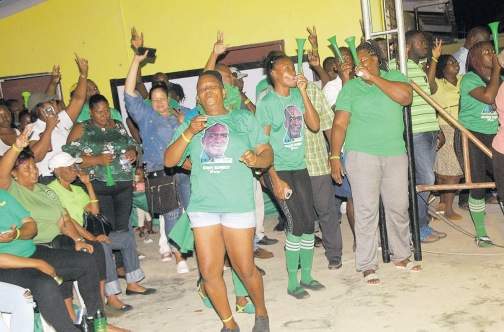 “Delroy is an interesting candidate, an interesting prospect,” Holness told a large crowd of Labourites at the Burnt Savannah Primary School, a few miles west of Santa Cruz, a week ago.

By way of explanation, Holness pointed to Slowley’s history as a politician. He noted that in the parliamentary elections of February 2016, Slowley ran as an independent candidate in St Elizabeth NE and got 696 votes — an unexpected number in modern Jamaica given the two-party dominated politics.

The seat was won by the People’s National Party’s (PNP) Evon Redman, who polled 7,726 votes ahead of the JLP’s Saphire Longmore’s 6,206. The PNP’s margin of victory was way below that of its triumph in December 2011.

Holness told Labourites in Burnt Savannah that Slowley had spent “his own money” on community work and in funding his independent campaign, while exposing himself to the “vicissitudes of Jamaican politics”.

“For him (Slowley) to do that shows that he has a genuine love, care and concern for the people. That he garnered so many votes shows people love, respect him, and take him seriously ….” said the prime minister.

It was also a sign that St Elizabeth North Eastern — long a bastion of PNP power in rural Jamaica — was “changing its political nature” and was becoming ripe for the taking by the JLP, Holness said.

The prime minister didn’t mention it, but it’s no secret in local circles that back in February 2016, a significant number — perhaps the bulk of Slowley’s votes — resulted from discord within the camp of the PNP leading up to that parliamentary election. Anger at the decision to drop Member of Parliament Raymond Pryce and replace him with Redman led to a significant number of Comrades breaking ranks and throwing their support behind Slowley.

Back then, Slowley insisted that he had no interest in representing either major political party but simply wanted to do his best for people who badly needed proper representation. His independent movement represented “a wind of change” in St Elizabeth North Eastern, Slowley said at the time.

After the election there came another interesting twist. Slowley, apparently convinced that the independent route to political success was unviable, openly flirted with the PNP which had been booted from Government.

There were raised eyebrows and high drama in July of 2016 as Slowley and a group of supporters attended the public session of a PNP St Elizabeth North Eastern Constituency Conference. Then Opposition leader and PNP President Portia Simpson Miller invited Slowley to the platform, hugged him, kissed him on the cheek, and described him as “Comrade ‘Gairy’ Slowley”.

At the time, Redman declared on the platform that he was open to working with Slowley in his quest to unite the PNP in St Elizabeth North Eastern.

In response to a direct question from the Jamaica Observer following the recent meeting in Burnt Savannah, Slowley said he had moved on from his 2016 political outlook and approach and now found the JLP to be by far the best choice as a platform for political representation.

He is impressed with the achievements of the JLP Government in their two and a half years in office, Slowley said.

“The macro indicators are looking very good…” he said. “I am a businessman so when I see single-digit interest rates I am happy about that,” he added.

He was also pleased with efforts to improve infrastructure through massive road construction projects and he was “drawn” to the “youthfulness of the (JLP’s) leadership,” Slowley said. The reference to youth was obviously in relation to Holness being 46 years old, while PNP president and Opposition Leader Peter Phillips is 68.

Slowley told the Sunday Observer he had “sat down and assessed what was happening and, at this present time I am feeling very comfortable stepping forward to represent the Jamaica Labour Party”.

While he understood the history of St Elizabeth North Eastern as one of the safest for the PNP in rural Jamaica, Slowley said “I have no doubt in my mind that with what is happening within the Government and with my intervention in North East St Elizabeth … that there will be a difference come election time. There is a wind of change that is blowing and the people are very excited. The PNP used to be ahead in terms of the atmosphere… but now the Jamaica Labour Party have stepped forward and we are really charting the path.”

He seemed to suggest that he was again in a position to exploit divisions within the PNP in St Elizabeth North Eastern.

“The PNP is struggling and they are very uncomfortable at this time … and everybody knows that because there is a united approach behind the Jamaica Labour Party (in the constituency) … On the other side for the PNP, there is division all the way and so we don’t even know if the present candidate (PNP Deputy General Secretary Basil Waite) will make it to the final lap…” Slowley said.

Following word from Redman that he will not be seeking re-election for a second parliamentary term, Waite won the support of the majority of delegates in May to be that party’s standard-bearer for the next election. In the delegates’ selection contest, Waite won ahead of Councillor for the Balaclava Division Everton Fisher.

He felt the need to help poor people not only “because mi heart burn me”, but because as a philatropist “mi pocket burn me”, he said.

Slowley said he wouldn’t be waiting on the next election to make St Elizabeth North Eastern his own. By his deeds he would assertively be playing the role of representative even outside of Parliament, he said.

He spoke of his long-standing tendency to do community work, including mending community roads, even before he had any interest in politics.

“Mr Prime Minister, you may have to consider putting me in your roadworks ministry because I have learnt the art of fixing roads…”Slowley quipped.

He spoke of the urgent need to improve agriculture using value-added initiatives such as a peanut-processing factory to harness the large quantities of the product in north-east St Elizabeth; special attention to education to deal with the high levels of absenteeism and dropouts in schools; special attention to skills training; the rehabilitation of dilapidated community centres to assist youth training; and the use of idle lands to boost housing and agriculture.

Slowley said he was advocating for such projects to be undertaken quickly, not after the next election.

He warned that “money is a serious thing. Money, the Bible say, is the root of all evil; money will cause you to lose your integrity but money cannot buy back your integrity and your character. So I want to commend our prime minister who has made such great effort to make sure that the people that are coming to represent him … are credible persons, reputable persons, decent character, with a good track record, who are willing to serve”.