Do we have the education leadership we need? 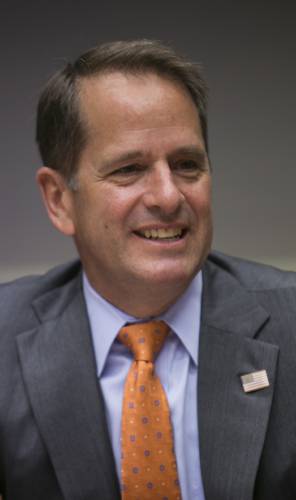 What do you do with a commissioner who talks about our schools only in terms of failure? I watched his recent presentation to the Rochester 911 group on YouTube and that’s what is sounded like to me.

Leading an education system is a complex undertaking. It takes real … well … leadership. I wonder if there is another commissioner in the country with such a rhetoric of failure. An education leader would normally convene parents and educators seeking engagement around a vision for what is possible. If math achievement is low, what’s our strategy? If our schools could do more to reach students with special needs, how do we support their efforts to do that?

We used to do that. As a result, New Hampshire leads the national movement to progress beyond the 1950’s model of education toward a form of personalized learning that guides and supports each student in choosing his or her path. Our current education commissioner cribs the language of student centered options and choices, but his real message is that our schools have failed and the solution is private school vouchers.

In the video, former Rep. Susan DeLemus introduces Commissioner Frank Edelblut to the Rochester 911 gathering as the only thing Gov. Chris Sununu has done right and it is clear the commissioner is at home in this room full of friends.

The commissioner opens with the standard “stand and deliver” description of what teachers did in a classroom organized on the industrial model – move the students through in age cohorts in which a few students learn and most don’t, but most graduate without the knowledge they need to succeed.

He talks as if New Hampshire’s years of moving away from that model to a much more demanding role for teachers hadn’t happened. How easy would it have been for an education leader who was in touch with his schools to say, “We’ve got a lot still to do, but the schools right here in Rochester are leading the way with one of the most ambitious personalization strategies in the state. Why, in middle school geometry, they’re …”

Instead, all of Commissioner Edelblut’s stories are told at the expense of the student, the teacher, the administrator or the schools. Contrast this with a leader who might indeed identify the challenges facing public schools, but would go on to call out what is best in his schools to illustrate the ideals and strategies he wants to strive for.

But in Rochester, Commissioner Edelblut characterizes a middle school principal as a manipulative guy getting shown up by a student while trying to show off for the Commissioner. Then he ridicules a student who uses “good” vs. “well,” teeing up the assertion that our schools fail the students who go to the Career Technical Education programs.

In his next story, the commissioner twists a teacher’s vernacular phrase about “getting to June” into an accusation that she doesn’t understand the goal of education. This gives him the opportunity to do the one-size-doesn’t-fit-all rap, the primary refrain of private school voucher advocates.

When he gets to academic performance, we hear that New Hampshire schools are at the top compared with other states (… and what does that tell you, he wonders) but that they are really very bad. Although only a few kids reach the learning goals, we accept that and promote them anyway.

The commissioner’s punchline is that the system has failed. Why would you stick with such a system? You might try something different. You might go in a different direction. More of the same won’t work.

Commissioner Edelblut’s solution: “I’m an advocate for options for our students.” This is the pivot point. Depending on the audience, he can advocate for options and choice in the public schools, asserting that personalization isn’t far along in New Hampshire’s schools (in spite of the fact that people come from all over the country to learn how our schools are challenging their teachers to reach each student). He can even say grace, as he did the other day, over an new program to help Rochester students align their studies with their career goals.

But if he’s got a like-minded audience such as Rochester 911, he does not mention important Rochester innovations. After his indictment of “his” schools, he can return to his overriding vision: we should give children private schools vouchers instead.

Our public school students are not getting the commitment they deserve from their state government. The commissioner charged with leading our system has settled for indicting our schools as a failed project. New Hampshire’s children deserve better than that.

(Bill Duncan of New Castle is a former member of the New Hampshire State Board of Education.)