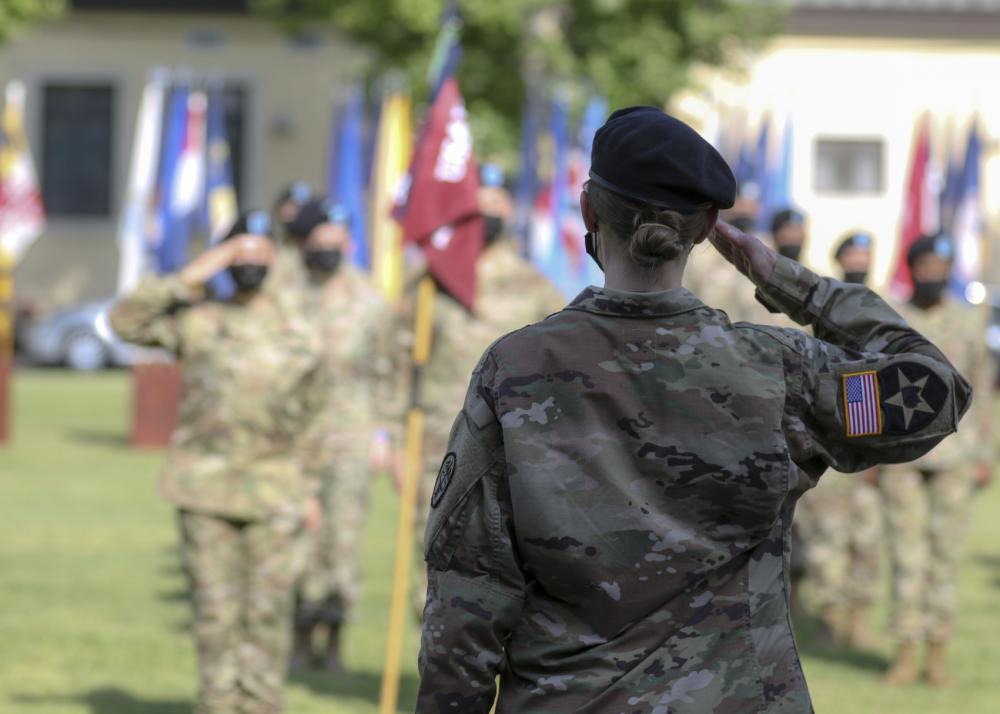 “Both of these fine officers have excelled in their duties and are ready for the next leadership challenge of their careers,” said U.S. Army Col. Andrew Landers, the reviewing officer for the ceremony and commander of Landstuhl Regional Medical Center, USAHC-V’s higher headquarters. “The success of (LRMC) and Regional Health Command Europe can be credited in large part to the amazing subordinate commanders we have on the team, (Matthews) is no exception.”

USAHC-V, often referred to as “Army Medicine South of the Alps,” is the only health clinic at Caserma Ederle in Italy, an Italian-controlled military installation which is home to the 173rd Airborne Brigade, the U.S. Army’s contingency response force in Europe. Additionally, the clinic provides medical support during regional military exercises.

“Leading a clinic during one of the most unique and challenging years in modern history has been no easy feat. You have left a lasting impression on the health clinic and the Vicenza Community,” said Landers. “You’re quite literally at the tip of the spear in the COVID-19 response; developing a patient hold critical care unit and transport capability, opening the first acute respiratory clinic in Regional Health Command Europe, and executing the large task of vaccine distribution, ensuring your military community members, including local nationals and the Vicenza military community, received their vaccines in a timely and safe manner.”

During Matthews’ command, USAHC-V completed a successful survey by the Joint Commission, a testament of the clinic’s commitment to high-quality health care and patient safety. In early 2020, Matthews led the COVID-19 medical response efforts across Italy, one of the first Nations to implement regional lockdowns, including the area in which USAHC-V is located. Nearly a year later, the clinic began community vaccination efforts.

“It’s hard to believe it’s been two years since I was standing here and took command,” said Matthews. “To say it didn’t quite go how I anticipated would be an understatement. In January (2020), I started watching the reports of (COVID-19) in China, no big deal. We’d seen SARS we’d seen bird flu, swine flu, Ebola, this will blow over like those. Probably a week or so later it showed up in Italy. Later that week, we were shutting down almost everything. Training stopped, travel stopped, the streets were empty, only essential services were running and we become the main effort. For those unfamiliar, military operations at a medical unit being the main effort is a bit of a rarity.”

Matthews described response efforts the clinic initiated to safeguard Americans in Italy, including opening a drive-thru pharmacy, the COVID-19 treatment clinic known as the Acute Respiratory Clinic, and establishing testing capabilities to detect and limit the spread of the virus.

“Bottom line, this command has been anything but business as usual,” said Matthews. “I’m so proud of this team. They faced every challenge head on and came through victorious. They demonstrated resilience in the face of diversity and flexibility in the face of ambiguity. They have done an exceptional job of taking care of our community.”

Matthews, an emergency medicine physician by trade and Dallas native, is slated to become the next command surgeon for Special Operations Command Europe.

“(Matthews) is a great example of what a servant leader is. I’m so excited to just continue to build upon your legacy,” said Schneider, a native of Willis, Kansas. “I am ready to support (USAHC-V) through the good, the bad and the ugly, but we will be there together.”

Schneider, a medical logistics officer by trade, is coming to USAHC-V after serving a tour as the chief of Logistics at Evans Army Community Hospital, Fort Carson, Colorado.