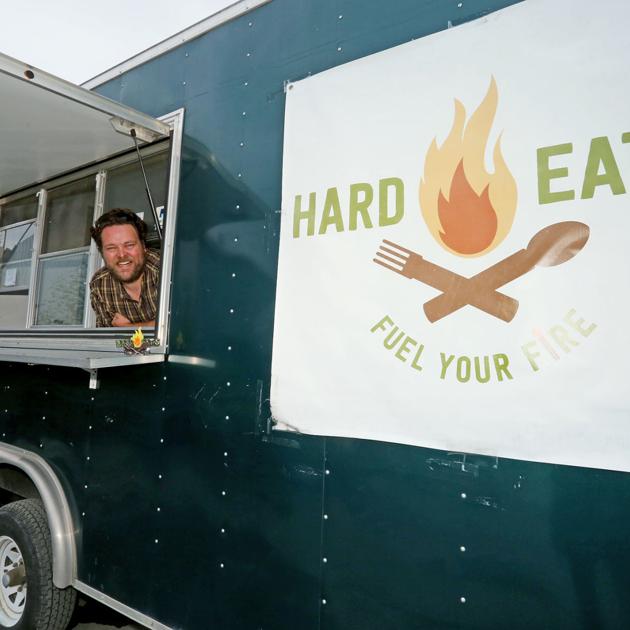 Joe Hardenbrook, owner of local food truck Hard Eats, was raised cooking. His mother cooked, his grandmothers cooked and his grandfather was a butcher. So when he said food runs in the family, it’s no joke.

“I enjoyed cooking from an early age, so when both my parents were working when I was in junior high and high school, I would help out and do quite a bit of the dinners around the house,” Hardenbrook said.

Hardenbrook told a story of one of his grandmother’s, who had an aptitude for canning and pickling, filling an old fallout shelter in her basement with hundreds of jars of preserves.

After moving up to Fairbanks at the age of 18 to attend the University of Alaska Fairbanks and study history and political science, Hardenbrook took a series of culinary arts classes at the university and worked part time in the evenings at kitchens and restaurants around town.

Now, years later, the practice and the passion have converged, creating Hardenbrook’s food truck and catering business. Linking elements of his childhood, his grandparents taste for locally grown foods and adventures around the world.

“Working a food truck is great because you work your tail off in the summer and then when it starts freezing and you can’t keep a water system going you winterize everything and put it away,” Hardenbrook said. “Then you get to go on longer vacations and trips to explore different food cultures around the world.”

Hardenbrook and his wife, Anna, are planning to travel to Iceland, Germany and areas of the Mediterranean this fall.

“The idea is we do these things and bring this menu items back and incorporate them into the food truck,” Hardenbrook said.

Two years ago, the two floated parts of the Tennessee River and Cumberland River.

“We did Knoxville to Nashville and stopped along the river at every catfish shack and farmers market we could find,” Hardenbrook said.

A combination of acquired tastes from faraway places in concert with as close to all Alaskan ingredients creates the locally sourced cuisine that feeds eager Fairbanksans throughout the summer months.

Hardenbrook began Hard Eats as a catering company in 2013 and purchased his food truck in 2015. Since then, he works in collaboration with local breweries, bars and other vending options in combination with wedding and event catering.

The food truck is usually parked outside HooDoo Brewing Company each Wednesday and recently, Hardenbrook is collaborating with newly opened downtown drinkery for weekly brunch specials each Sunday in July.

Hardenbrook will be serving up an as yet unknown weekly special this Sunday from 11 a.m.-4 p.m. in front of Goldie’s located on Fifth Avenue behind Dance Theater Fairbanks.

This summer has also brought a number of teaching opportunities forward in collaboration with the Summer Fine Arts Festival teaching eager students the arts of sous vide, or hot water bath cooking, as well as the delicate craft of sourdough baking and dutch oven concoctions.

In recalling some of his more brazen dishes, Hardenbrook describes a localized take on a sushi roll that utilizes smoked Alaska salmon rolled in a combination of white rice and Alaska grown whole grain barley, bonded with traditional rice vinegar and Alaskan honey, served with an Alaska grown strawberry sriracha sauce.

Hardenbrook describes the themes offered by the food truck as localized takes on Baja style Mexican cuisine, southern comfort cooking and whatever else is inspired by ingredients available in town.

Ultimately though, while each dish prepared by Hardenbrook is a craft in and of itself, cooking is about much more than tastebuds for the Fairbanks chef.

“The thing I love about some of the traditional aspects of food is what it traditionally means and how important it’s been,” Hardenbrook said. “I just love how food means what it means: protection, friendship, welcoming folks to your community, to your house, to your family. It’s not just sustenance for the body.”