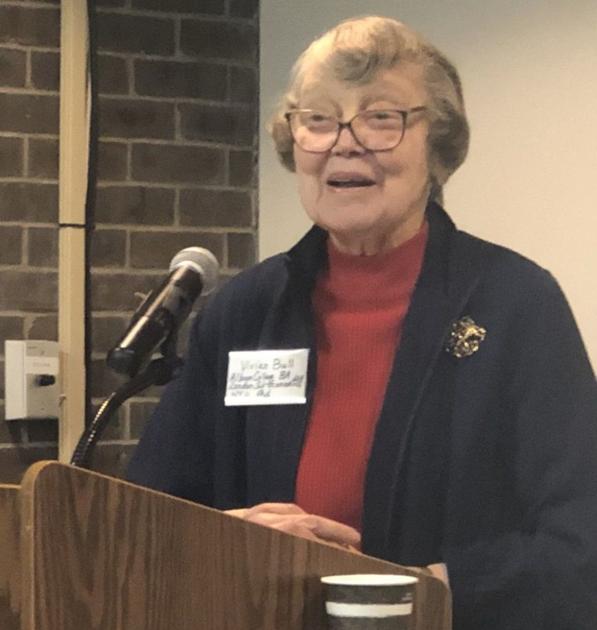 MADISON – The American higher education system is in trouble.

Her lecture covered a range of concerns, from decreasing enrollment to student debt, faculty layoffs and alternative paths to career advancement outside the university system.

“The idea of going to college as the next step when you graduate from high school has begun to change even here in the United States,” observed Bull, who also served as president of Linfield College in Oregon for more than 10 years.

While the university system has yet to experience a “radical change,” the impact of “fewer students” in America’s universities and colleges will be felt as the trend continues, according to Bull.

One of the factors is simply biological: Americans aren’t having as many babies and the family is shrinking. Consequentially, there aren’t as many young people lining up to enroll at institutions of higher learning.

Bull explained that tuition and donations are two major economic sources for higher education, and with a decrease of college-eligible students available to enroll, the decline will naturally pose challenges due to the lost source of revenue.

Bull offered some historical context to American higher education by tracing the modern system back to World War II and the return of service members looking for an education and a pathway into civilian careers.

This led to an influx of students and an expansion of infrastructure to accommodate them all. Bull referenced the creation of the junior college as an example.

The post-war college system was effective in getting students into the workforce. Bull used a personal anecdote to demonstrate the point. She spoke about a brother who returned from the Navy after World War II, enrolled in college, graduated, and found himself with an electrical engineering skill-set much in demand by employers.

The world today, however, is starkly different.

There are fewer jobs available to graduates, Bull noted. And students are taking on an overwhelming amount of debt just to get into the classroom and start their journey to a good-paying job and ultimately, a career.

The scenario makes alternatives to college and university as an avenue into the workplace an attractive option, Bull remarked.

Universities and colleges are facing increasing competition from alternatives like apprenticeships as they try to attract a shrinking pool of potential students.

“Many of the people that are in the programs are being trained in various ways to do very technical things for organizations,” said Bull. “They will learn something that will be useful in whatever they are interested in going into.”

The audience responded to Bull’s lecture by commenting on the role of a university during a discussion period following Bull’s talk.

Mary Lou Motto of Summit, a former English professor at Rutgers University, pushed back on the tendency to look at higher education as an “economic proposition” and “preparation for getting a job.”

Motto highlighted the university’s historic role as a societal institution responsible for producing an educated citizenry, a role that extends back centuries, Motto noted.

Motto went on to call the cost of universities a “national disgrace” and said she understands the expectation of parents to ask what college is going to do for their child, given how “extraordinarily expensive colleges are.”

Another former university teacher offered a more positive perspective on the current state of higher education.

Eleanor Flanigan of Madison, a former information technology teacher at Montclair State University for 25 years, said she believes students still actively balance the more practical and career-driven side of their education with the intellectual and character-driven values mentioned by Motto.

Even with higher education expected to deliver on career opportunities, college curriculum offer an array of courses designed to allow students to explore different areas of knowledge as well, Flanigan observed.

She went on to mention that the philosophy and religion department at Montclair State is still in existence, despite popular beliefs that such programs are going extinct.

Motto politely rejoined the conversation, adding students are “still curious and want to do work,” with both teachers agreeing the cost of universities is far too high.

Bull thanked both Motto and Flanigan for their contributions, and added that as an economist, she focuses on the financial side of higher education. But she agreed the university’s role goes beyond a “vocational school.”

Bull told her audience of many current and former teachers that she saw university layoffs as a major concern.

With the number of students going down, some universities are having to eliminate whole programs, Bull reported.

And the first people to go are the support staff of many professors.

That support staff consists of faculty without doctoral degrees, or those actively pursuing doctorates for teaching positions at the university level.

These staff members “take pressure off the faculty,” allowing the professors to engage more directly with students by helping with the technical side of running a college classroom, remarked Bull. She added that the elimination of support staff is a trend not confined “in any one place, but happening across the communities of higher education.”

Bull responded to a question she said she hears all the time: “Why don’t they (the university) work as the corporations work?

“Why don’t they say ‘OK, this is what we’re going to do — we hire people and we lay off people,” Bull wondered, before providing her answer:

“Because that has not been a tradition of who we are.”