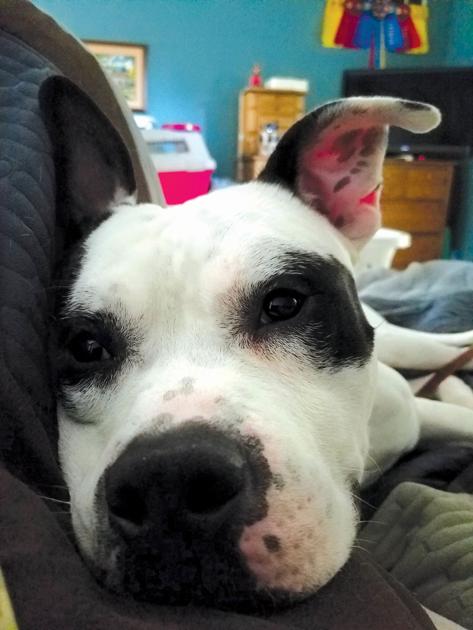 Helping animals that come from terrible situations isn’t for everyone, but it is for Joyce Zentmeyer, a Davisburg resident who works at Adopt-A-Pet in Fenton.

Since Jan. 1 2015, she and her husband have fostered approximately 100 animals. Zentmeyer is the kennel administrator and event coordinator, and specializes in animals that need help before they can be adopted.

Her first foster was a puppy, who was reportedly “bitey and growly,” she said. Zentmeyer took her in to see if she did have a behavioral problem, or if she was just being a puppy.

Since that puppy, she’s helped dozens of dogs, including a pit bull named Incz that was hit by a car. He had issues with his front left leg and back left leg, and would hop around. Incz was brought in from Genesee County Animal Control (GCAC).

“It was determined that he didn’t need to have his leg amputated, but he needed surgery,” she said. They reached out on Facebook, and one woman sponsored his entire first surgery, which cost thousands of dollars.

“The dog has been hit by a car, he’s limping, but he’s the happiest dog on the face of the earth. He loves people and he loves life even though he’s in pain,” she said. Incz, 5, still needs one more surgery.

“It’s hard in the sense of what he suffered. He’s still suffering. These are the ones we fall in love with the most, the ones that have the hardest deal,” she said. Her husband wanted Incz to be a foster fail — meaning he wanted to keep him — but they found him a great home. The Zentmeyers have two foster fails.

Her favorite foster case was one of the hardest. The GCAC found a Labrador retriever mix that had been living in a basement in a cage that was not big enough for him.

“He had been down there for three weeks with no food and water,” she said. “He couldn’t walk. He was literally skin and bones. The vet said he was probably one hour from dying.”

They named him Ezekiel. He was “afraid to death” of everyone, she said, so Zentmeyer would carry chicken in her pocket when taking him around town. She would give people the chicken to give to him.

After a few months, Ezekiel, 3, learned to trust humans. It took awhile for him to get adopted, which perplexed Zentmeyer. She took him to adoption events around town, but no one wanted him. Ezekiel also wasn’t as social with people as he usually was. But, at an adoption event at the Detroit Zoo, he met a family who he loved.

“Dogs wait for a specific family,” she said. “He now sits on the back of their couch and watches the deer, he goes on their boat, he has the best life. He snuggles with the kids. When they come along, it’s like ‘that’s the piece you were missing.’”

They’re currently fostering a 14-week-old puppy, who was very sick. They don’t know what the sickness was, but “she was going to die,” Zentmeyer said. The puppy, whose name is Hope, is doing much better.

“The most rewarding part is when they get a home. There’s nothing like it. The harder the case, the better the feeling,” she said.

She urges those interested in fostering to get a hold of Adopt-A-Pet to apply, and to always get your dogs and cats spayed and neutered.