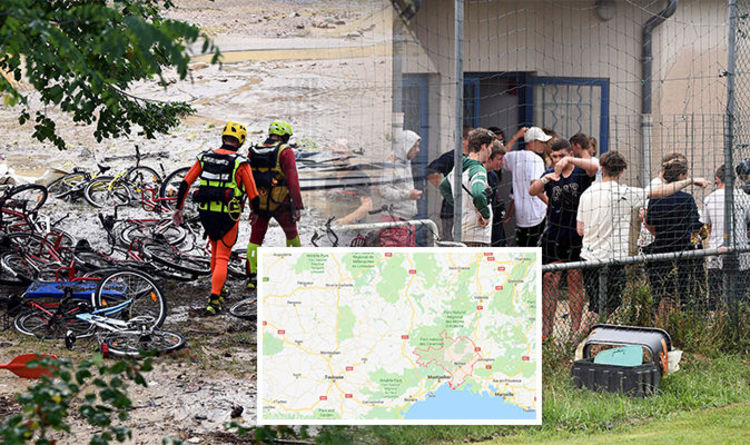 In southern France, 750 people were rescued by helicopters from a number of campsites following the torrential rain.

More than 1,600 people have been evacuated across the region and a 70-year-old man from Germany is currently missing.

Should British tourists still travel to the country for their holiday?

The Foreign Office has not issued an official warning for British travellers.

Flood alerts are in place for six areas, according to the French interior ministry on Twitter.

The main areas affected were in the south in Gard, Ardeche and Drome with 400 firefighters and police drafted in.

It is estimated that more than 17,000 homes have been left without power.

A British camper told the BBC that they experienced “the loudest thunder and brightest flashes of lighting”.

He explained that they struggled to leave after realising the severity of the situation: “Village streets had turned into rivers and the rain was so hard that we could barely see out of the window.

“We were lucky to make it out of the area, soaked through but unharmed, by the sound of things.”

Another tourist said it was the “very frightening” after attempting to drive after local rivers burst their banks.

Roads have also been cut off with videos showing cars being forced along narrow streets by the flowing water.

What should you do in a flash flood?

Tourists caught up in a flash flood should avoid driving or walking in the flood water.

According to the Met Office, just six inches of fast flowing water can knock over an adult.

Two feet of water can move a car, so it is advised to seek emergency services straight away.

If caught up in the floods, tourists should seek high ground and avoid all sources of electricity.

Clean water and essentials should be taken when leaving the area in case the floods continue for a period of time.