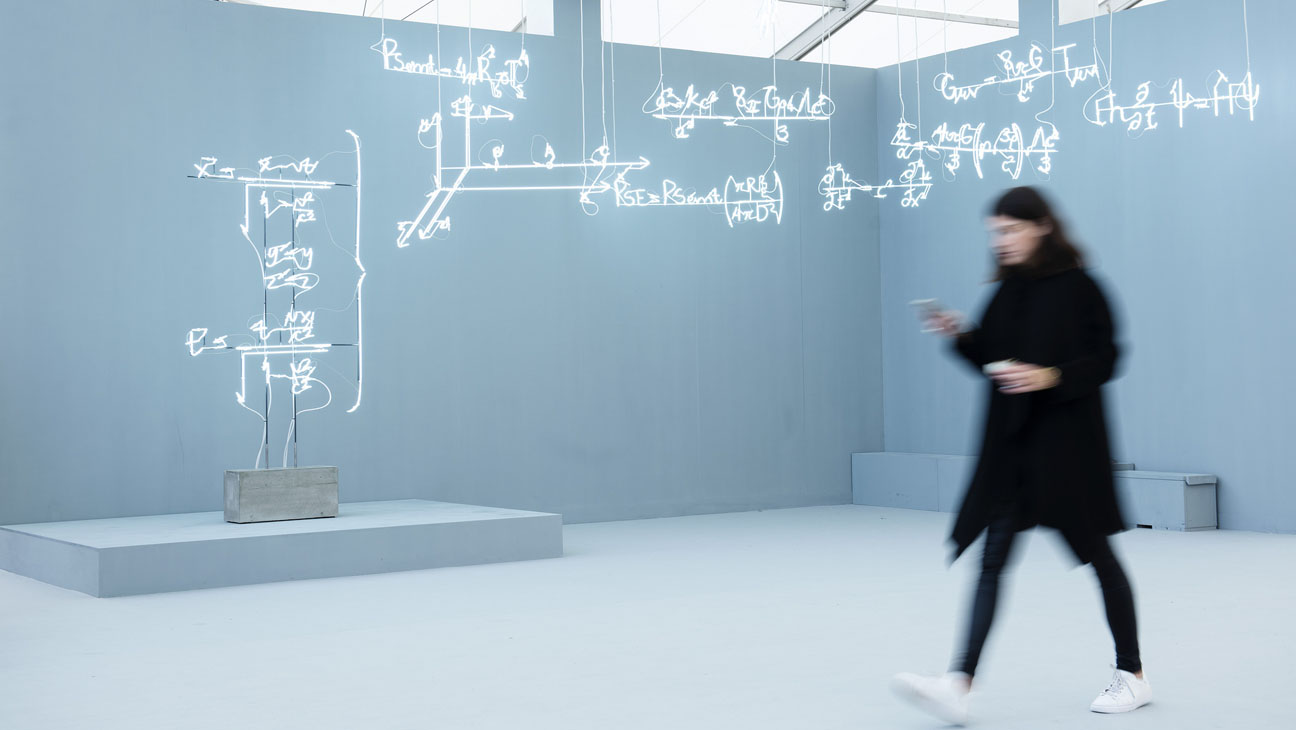 Keira Knightley, Natasha McElhone, Rose McGowan and fashion designer Raf Simons checked out the wares of the Endeavor-owned fairs in London as the company’s Ari Emanuel and Mark Shapiro made the rounds to talk up Freize’s 2019 L.A. event.

Are London and L.A. all that different, culturally speaking? Because although art stars like Tracey Emin, Nan Goldin (hot off her appearance on HBO’s The Deuce), Rachel Whiteread, Kiki Smith, Julie Mehretu and others were in London this week for the Frieze fairs, in which Hollywood’s Endeavor owns a majority stake, the crowd of collectors also buzzed with delight over the movie and TV stars at the Regent’s Park event. (Laurie Anderson, who spoke at the fair Oct. 5, of course, fits both camps.)

Art patrons will have a better answer for that question when London-based Frieze makes its February debut on the Paramount lot, where at least two previous art fairs have found only heartache. What will set Frieze apart from those?

“None of them have the power and the appeal of the Frieze brand,” Endeavor’s Mark Shapiro told THR, with CEO Ari Emanuel and the company’s Sam Zussman standing by. Frieze’s leadership enjoys the respect of the global art community, Shapiro added (he ticked off Matthew Slotover and Amanda Sharp, who co-founded the company; Victoria Siddall, who oversees all the Frieze fairs; and Bettina Korek, executive director for Frieze L.A.). “They are not commercial hunters — they really have a genuine desire and passion to do right by the community and the artists themselves,” he said. “Yes, sales is a part of the business, but the showcasing of it, and the energy and the newfound entrainment that we think will surround it will create an immediate and impassioned following.”

The Frieze fairs in London and New York are known not just for great art but also for fun, food and entertaining interventions. (At 2017’s New York fair, a Hollywood-obsessed artist had a trio of actors impersonating Leonardo DiCaprio’s most famous movie characters trawling the aisles.)

“The events and the initiatives that we are surrounding Frieze [L.A.] with will be a real differentiator,” Shapiro continued. “We represent so many artists, so many celebrities that are significant collectors themselves, and the response we’ve had from the talent we represent has been extraordinary.”

“Once he gets started he won’t stop,” Emanuel chimed in.

“I told her that I just follow you and Bradford around and pick up scraps,” teased Shapiro, alluding to Emanuel’s close friendship with the L.A.-based artist Mark Bradford, who represented the United States at the last Venice Biennale.

As to what Shapiro called the extraordinary collector base among stars, THR caught Keira Knightley on opening day clad in a bright green rain slicker (despite the unusual London sunshine) as she stopped by London gallerist Maureen Paley’s booth to peruse artwork by Turner-Prize winning German artist Wolfgang Tillmans as well as Natasha McElhone (co-starring with Sean Penn in Hulu’s The First), resplendent in a long millenial pink velvet coat, evaluating a special sale organized by artist Tracey Emin in Deutsche Bank’s cushy VIP lounge.

Tracey Ullman (whose eponymous HBO show just premiered its third season) was seen laughing and chatting with pals near the fair’s main entrance in the later afternoon. Also on hand was Rose McGowan, perhaps seeking respite from what she described on Twitter the same day as “the anniversary of one of the hardest years of my life.” From the world of fashion were Claudia Schiffer; Olivia Palermo; model Zara Martin; designers Raf Simons (an art lover known to collect artist George Condo) and Nicholas Kirkwood; and the esteemed British fashion photographer David Bailey, who collects Damien Hirst.

Emanuel, Shapiro and Zussman were present for a champagne toast announcing the winners of the fair’s various honors and prizes. Spruth Magers — the gallery based in Berlin, London and L.A. — was honored as best booth (or stand). Among other artist honors, the fair also announced that the first acquisitions made through the Contemporary Art Society’s Collections Fund at Frieze included L.A.-born Kehinde Wiley’s Narrenshiff (Ship of Fools), a 16-minute, three-screen film-installation completed in 2017.

Wiley, who made headlines around the world with his portrait of President Obama earlier this year and is collected by Hollywood figures like Neil Patrick Harris, has created a collage that looks at humans’ enduring relationship with the ocean while suggesting wider concerns of international territories and governance. Actress C.C.H. Pounder (Avatar, The Shield, NCIS: New Orleans) narrates, reading from Michel Foucault’s Madness and Civilization and Frantz Fanon’s The Wretched of the Earth. The film will join the permanent collection of The Box at Plymouth, a new space that will join six London collections in one venue — whose opening will coincide with an important anniversary of colonialsm, the 400th year since of the sailing of the Mayflower.