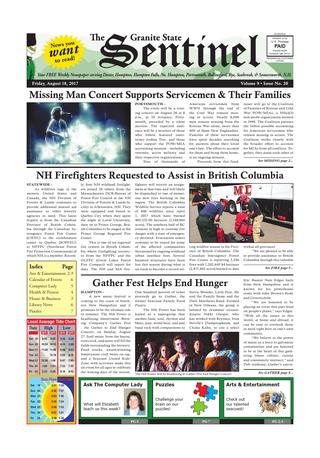 HAMPTON FALLS — Iconic photos of Woodstock, with free spirits dancing in the rain, had nothing on Seacoast people who attended Gatherfest at Applecrest Farm on Saturday.

At times it poured, but the music, provided by the Soggy Po’ Boys, Hayley Jane and the Primates, and the Ryan Montbleau Band, drew people out from under the tents to dance in the rain. Kids of all ages had so much fun that getting wet was an afterthought, and there were plenty of tents to dry out under later.

“We are really big fans of Hayley Jane and Ryan Montbleau,” said Jacqui Moore of Haverhill, Massachusetts. She came with her husband Brian and 2-year-old son Finn.

“I don’t mind that it’s raining. We are having fun anyway.”

“We try to hit as many good festivals as we can during the season,” added Brian Moore.

The second annual Gatherfest is a fundraiser for Gather, a food pantry based in Portsmouth that serves the Seacoast community. Applecrest Farms donated its beautiful property for the day, and provided food, drinks and its famous cider doughnuts.

“We had very successful pre-event ticket sales and we have good sponsorships,” said Gather Executive Director Deb Anthony. “Last year and this year we sold about 500 tickets in advance.”

Anthony said most of the money raised by the event will go toward Gather’s Meals 4 Kids program, providing food for kids who might go hungry because school is out and they do not get the daily free breakfast and lunch they receive during the school year.

“This summer we are providing meals for about 500 kids a week,” she said. “We do mobile sites where we deliver the ingredients, and ideas for meals for a week, for each child. We provide fresh fruits and vegetables. Every kid gets milk, eggs and bread. We get a lot of food donated but we can’t rely on always having all of those ingredients donated, so we have to buy things to be sure we have enough.”

Food trucks from the Blue Mermaid, Lexie’s Joint, El Rodeo and Kona Ice were on hand and there was a selection of craft beer, hard cider and wine available.

A kids area featured face painting, bracelet making and a giant soccer ball that was actually a bounce house.

“None of this event would be possible without the many, many volunteers involved,” said Mike Toner, vice president of finance for Gather. “We have a lot of volunteers standing in the rain because they believe in what we do. I can say with all my heart that what we do is phenomenal.”

Toner said he came to Gather from the corporate world and is in awe of what Anthony and her teams make happen.

“She works closely with other agencies like Cross Roads House and other food banks in the state,” he said. “Last year, she gave 100,000 pounds of food to other food banks. She doesn’t want to hoard food. She wants to get it out to wherever people are hungry.”

Chris Mulder, vice president of sales for High Liner Foods, one of Gather’s partner sponsors, said their collaboration is a perfect fit for his company.

“We sell seafood and are one of the largest in North America,” Mulder said. “Our business is all about food. We have chefs and food scientists dedicated to the best in food. We realize that not everyone has the access to food they should. We want to concentrate our efforts where we can make the biggest difference. Our mission statement is to support and alleviate hunger. Gather is a good agency for us to join forces with.”

Mulder said they raised $20,000 for Gather last year and hope to do more this year. One way they raise money is through High Liner’s Fancy Pants Open golf tournament, being held this year Sept. 10 at the Wentworth by the Sea Country Club. All proceeds from the event go to Gather.