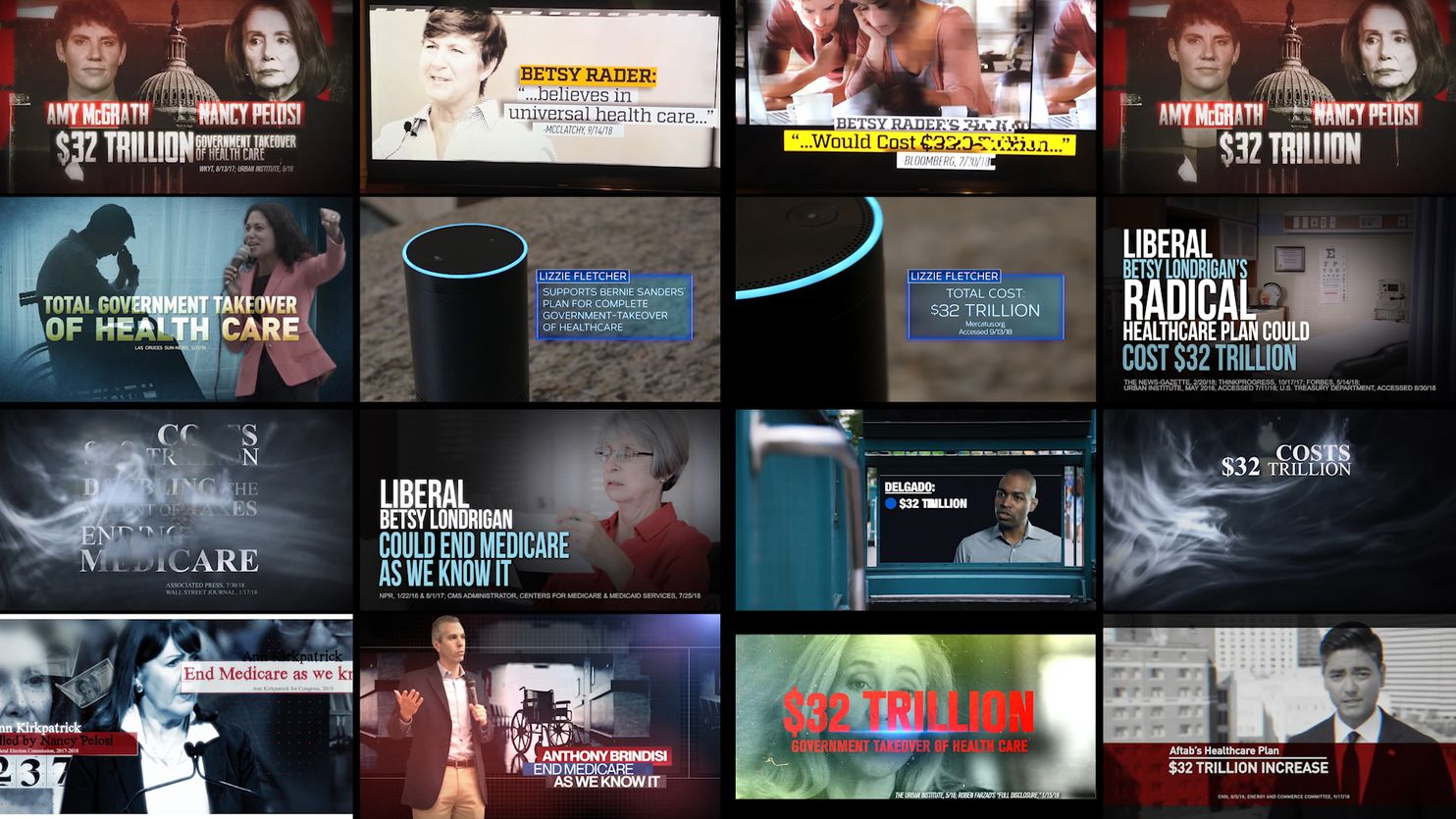 “Under the health-care plan Xochitl Torres Small supports, employer-based health coverage would be eliminated, forcing everyone into a massive government-run system, putting Washington bureaucrats in charge.”

“Slotkin’s plan is to take most everything we have and give it away. We paid into this system. Why would she want to take this away from us?”

“Anthony Brindisi wants to make everyone eligible for Medicare, and that’s a $32 trillion budget buster. Brindisi’s plan would end Medicare as we know it.”

“Elaine Luria has quietly committed to step toward a big-government takeover of health care. It would cost $32 trillion. It could double the amount of taxes every individual and business pays, ending Medicare as we know it.”

With a sick child on the couch, holding a teddy bear, a mother calls to make a doctor’s appointment. She pulls out her health-insurance card and then with her voice breaking, says: “What do you mean you don’t take that anymore? But it’s through my work.”

The ad, via the National Republican Campaign Committee, concludes by claiming that the Democratic candidate, Xochitl Torres Small, “takes from us to give it all to Washington.”

The ad is designed to frighten even as it poses logical absurdity: What mother is not going to realize that the nation’s health-care system had completely changed since she last called the doctor?

But there’s an even bigger absurdity: Torres Small is being attacked for supporting a “plan” that she does not even support.

So it goes in this year’s cycle of attack ads. With a numbing similarity, ads produced by the NRCC, the Congressional Leadership Fund (affiliated with House Speaker Paul D. Ryan) and individual Republican candidates all charge Democrats with supporting a universal health-care plan backed by Sen. Bernie Sanders (I-Vt.) — even if the Democrats are not supporters of the Sanders plan.

We found at least 15 examples in recent weeks, but surely we missed many — and more are sure to come. Let’s take a look.

Sanders has unveiled a plan he calls “Medicare for All.” Essentially, it is a single-payer plan. That means all of the bills would be paid by one entity — the federal government — in contrast to the hodgepodge health-care system now in place. Medicare, the health-care system for the elderly and disabled, is a federal single-payer plan, but people under the age of 65 get insurance from employers, through the individual market (Obamacare) or through Medicaid, the federal-state health system for the poor.

Sanders says he would first improve Medicare for seniors and the disabled by first eliminating deductibles and covering dental, vision and hearing aids, which are not covered under current law. Then, over the course of four years, the eligibility age would be lowered in stages until every American was covered.

There are many questions and uncertainties about the Sanders plan, such as cost and financing, all subject to fierce dispute. But, politically, there’s been a huge shift within the Democratic Party over the viability of a single-payer system, with support for the idea almost becoming a litmus test for potential presidential aspirants in 2020. During the 2010 debate over the Affordable Care Act, Democrats could not even muster support to add a “public option” — a single-payer option — to the bill.

Polling by the Kaiser Family Foundation in November 2017 indicated that a “single-payer health-insurance plan” is viewed positively by more Americans than negatively, with a modest but not giant partisan division between the two parties — a 22-point gap. By contrast, “Medicare for all” had a 50-point gap, indicating it was already viewed rather negatively by Republicans.

A Washington Post-Kaiser Family Foundation poll conducted in January and February found that 51 percent of Americans supported a single-payer health plan, compared to 43 percent who oppose it. But the partisan split had widened, with 74 percent of Democrats in favor but only 16 percent of Republicans.

However, support for a single-payer option, or even a buy-in for Medicare (known as Medicare-X Choice) does not mean support for Sanders’s plan. Medicare-X, for instance, continues to build on the current system, including allowing for employer-based health insurance, rather replacing everything as the Sanders plan does.

No matter. The attack ads pegs every Democrat with the Sanders brush if they so much as hinted at being open to the single-payer option.

In the case of Torres Small, the ad cites an interview with the Las Cruces Sun News in which she said she was “open to pursuing all pathways” to provide access to affordable health care. The ad turned that anodyne statement into backing a “total government takeover of healthcare.”

The newspaper was so outraged at the twisting of her words that it ran an editorial titled “Sun-News cited falsely in effort to ‘educate’ voters.”

The NRCC also pointed to the fact that Torres Small did not answer yes or no when asked if she favored a single-payer health system. But Torres Small spokesman Brian Sowyrda told The Fact Checker: “Xochitl is committed to fixing the ACA, lowering healthcare costs, improving accessibility for rural areas and protecting Medicare, but at this time she does not support Medicare for All.”

In the case of the Bishop ad, the campaign relies on Slotkin’s support for Medicare-X to justify having an elderly man ask why she wants to take Medicare away from him and “bankrupt” the system. As we noted, the Sanders plan in theory would actually improve Medicare for the elderly, in that it would provide more benefits and eliminate deductibles. The financing is certainly open to question, but Slotkin simply supports making Medicare an option, not the base of all health-care coverage.

The Bishop campaign did not respond to a request for comment, but the Detroit Free Press, in its fact check, labeled the ad as “not true.”

The Congressional Leadership Fund also relied on an upset elderly narrator to charge that Anthony Brindisi, running to represent New York’s 22nd Congressional District, would end Medicare as we know it. (The GOP loves this line, as it echoes across many ads. Ironically, back in 2012 the Democrats used the same phrase to attack a Ryan plan to reduce Medicare costs. It must poll well as an attack line.)

Brindisi, in campaign stops, has focused more on support for fixing Obamacare. “He struck a centrist tone, explaining he thought it was more politically feasible to fix aspects of the Affordable Care Act than to pass single-payer healthcare,” reported the Binghamton Press & Sun-Bulletin in May.

The CLF relied on a slightly looser statement by Brindisi to make its case that he supports a government takeover of health care: “On universal healthcare, so I supported the New York Health Act which is a universal healthcare bill in New York. I want to see a system where everybody can have health insurance in this country and whether we call it single payer or Medicare for all, I know there’s lots of different ideas out there, but I want to make sure that we are stopping the attacks on the Affordable Care Act first.”

The $32 billion number also pops up in the NRCC ad attacking Elaine Luria. There’s no elderly narrator here, just creepy smoke swirling as the voice-over charges that Luria has “quietly committed to step toward a big-government takeover of health care.”

Note the weaselly language — “committed to step toward.” That’s because Luria said in May: “You mentioned Medicare-X or Medicare public option. That’s the direction I’d like to see, to see us go. I think that’s the next, logical, achievable step as far as moving forward to provide affordable, quality health care to more people.”

Her use of the word “direction” apparently let the NRCC believe it had the license to go from Medicare-X straight to the spooky language about the Sanders plan, even though she does not support it.

The good news here is that these transparently misleading tactics are being spotted by local newspapers. The Lexington Herald-Leader called out Rep. Garland “Andy” Barr (R-Ky.) when he ran an ad that charged: “Amy McGrath’s single-payer socialist plan. Government run health care, eliminates private plans, costs $32 trillion, doubles your federal taxes and ends Medicare as we know it.”

As the newspaper noted: “That’s not her plan.”

The Barr campaign had relied on some creative snipping. McGarth had once noted that if the United States was building a health-care system from scratch, single payer “would be the way to go.” But Barr ignored the rest of her statement: “But we have a very complex health care system in America and right now we have the Affordable Care Act, that just came into effect a few years ago. I believe, as with every major piece of legislation in this country, we should try to make it work.”

An ad by Rep. John Abney Culberson (R-Tex.) attacked his rival this way: “Lizzie Fletcher supports Bernie Sanders’ plan for a complete government takeover of health care.” But Fletcher, who favors a Medicare buy-in, actually denounced the Sanders plan as too expensive — “we don’t know how to pay for it.”

The Houston Chronicle asked: “What else but palpable fear of losing could have possessed incumbent GOP Congressman John Abney Culberson to tell such a whopper?”

There are many more such ads. Look at the video above to see how the same themes echo throughout many of them.

There are certainly Democratic candidates who support Sanders plan. One could have a legitimate debate about whether it makes sense to completely transform the health-care system along the lines envisioned by Sanders — and how such a transition would be financed.

Some Democrat candidates may have unartfully straddled a line between expressing support for the single-payer concept and the current system. But others have been clear they do not support the Sanders plan. It’s simply absurd to tag all Democrats with the same broad brush, especially in ads featuring elderly narrators outraged that their Medicare will be taken away. No, it won’t.

(About our rating scale)

Send us facts to check by filling out this form