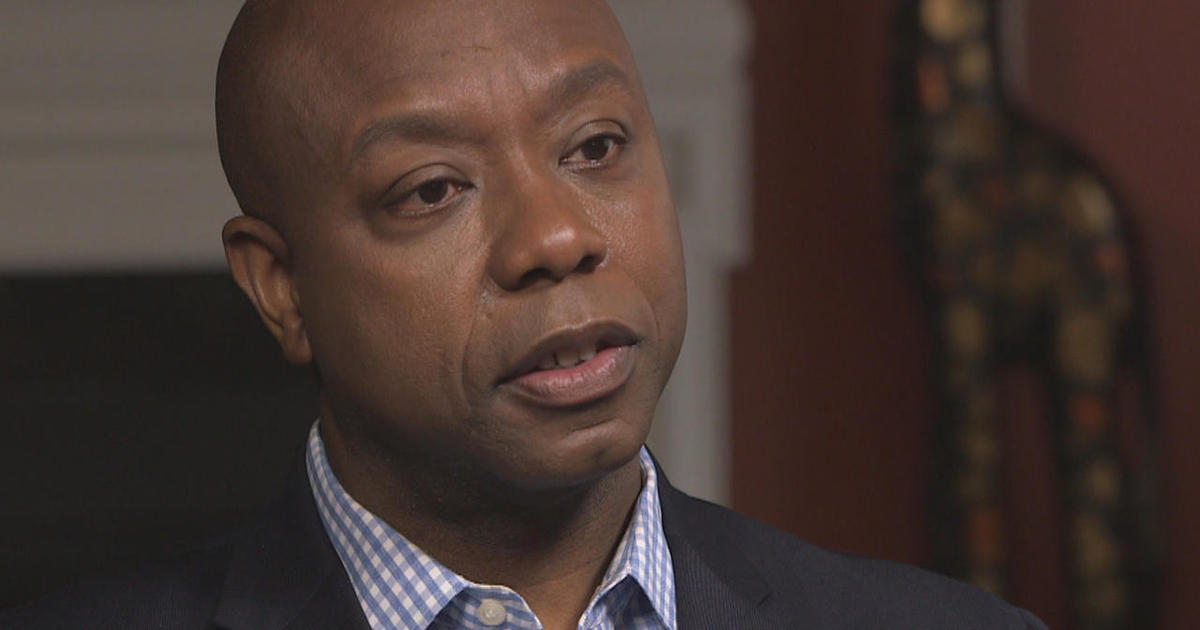 “Politics makes for strange bedfellows.” It’s an expression thought to have its roots in Shakespeare’s “The Tempest.” And a case in point MIGHT be the junior senator from the State of South Carolina. This morning, Martha Teichner has questions for Tim Scott:

The optics were telling: Senator Tim Scott, of South Carolina, was right there at President Trump’s side, the one black face in the crowd, as the president ballyhoo’ed the passage of the GOP tax overhaul last December. Mr. Trump referred to Scott as “a friend of mine; a very, very special man.”

For Scott, bridging that divide defines his political career. A devout Christian, he was elected as a Tea Party conservative to a House seat in 2010. Two years later, Scott was appointed to fill a vacant Senate seat. He won a full term in 2016.

In the North Charleston neighborhood where Scott grew up, he received only 13% of the vote. One of the poorest areas in the state, it’s heavily African-American and Democrat.

At Charlie Swint Jr.’s barbershop (“His dad was the first guy to cut my hair,” Scott said), Barack Obama’s picture is all over the walls.

“You know that as a Republican coming into an African-American community, you’re gonna get some tough questions,” Scott said. “So, you don’t come in here unprepared.”

He showed Teichner the old house:  “When my parents got divorced, we came here and lived with my grandfather. There’s two bedrooms in this little house. And me, my brother, and my mother shared this bedroom here on the side, and my grandparents lived in the back.”

Spend any time at all with Scott, and you’ll hear about his late grandfather, Artis Ware, who picked cotton as a young man and lived to see his grandson a member of the U.S. Senate.

“He would come to the table, and he would read the newspaper,” Scott said. “And it was, I don’t know 15 years later, maybe 20, when I realized he couldn’t read!”

“He was just pretending?”

“He was setting a good example.”

A bachelor, Scott is often seen with his mother, Frances Scott, a nurse’s assistant at a Charleston hospital, at his side.

“Tim was a very active little boy,” she said.

“So, when you say ‘active,’ that’s a synonym for ‘naughty’?” asked Teichner.

Walking the halls of Congress, Scott said, “I mean, poor boy from North Charleston, South Carolina, living his mama’s dream. This was just a thrill.”

So, how did he end up a Republican? “I feel comfortable identifying as a Republican mostly because my issues led me there,” he said.

“At what age did you start thinking of yourself as a Republican?”

“Twenty-nine, I announced for running for office. I had to make a choice: I had to figure out who I was going to be in the public stage in order for me to run for office.

“And I visited the Democrats. Democrat Party said, ‘You seem to be a talented kid. If you’re willing to wait a while, your time will come.’ So I looked at the issues I wanted to run on and I said, ‘Well, these are more aligned with the Republican Party. And they said, ‘You can run now.’ Cool.”

In a state as red as South Carolina, it’s unlikely any Democrat would have been elected to the Senate.

Scott owes his election to support from white voters, and sides with President Trump’s positions more than 95% of the time.

Being his party’s lone black U.S. Senator (in 2014 Scott spoke on the Senate floor: “In the course of one year, I’ve been stopped seven times by law enforcement officers”) gives him leverage – and his voting record cover – to address race head-on … most notably, after last year’s deadly white supremacist rampage in Charlottesville, Virginia, and President Trump’s response. [“You had some very fine people in that group, but you also had people that were very fine people, on both sides,” Mr. Trump said.]

Scott very publicly let the president have it, tweeting:

The confrontation went straight to the question of how Scott can remain a Republican, when polls have shown that the majority of Americans – and more than 80% of African-Americans – think the president is a racist.

Teichner asked, “How do you do what you do within that sense of things?”

“I’m in the 20% that does not believe that he’s a racist,” Scott replied. “I’ve had the good fortune of sitting down with the president, and he’s the one that invited me into the Oval Office. I said, ‘I totally disagree with your comments, Mr. President. I think that there is a way for us to heal this nation and move us forward. And as president of the United States, there are things that you can do to be helpful.”

Taking on the president can be risky, but Scott did it again in mid-July, effectively killing Trump’s nomination of Ryan Bounds to a federal appeals court judgeship.

As his profile rises, Scott continues to be coy about his political ambitions, but this much is clear: standing up has given Tim Scott the platform to stand out.

Teichner asked, “Are you any less comfortable saying to President Trump something he might not want to hear than you were a year ago?”

“I have a responsibility to who I’m going to be when I leave this office,” he replied. “To not do so would be to deny a part of who I am. And that’s just unacceptable as an elected official, but more importantly it’s unacceptable as a human being.”