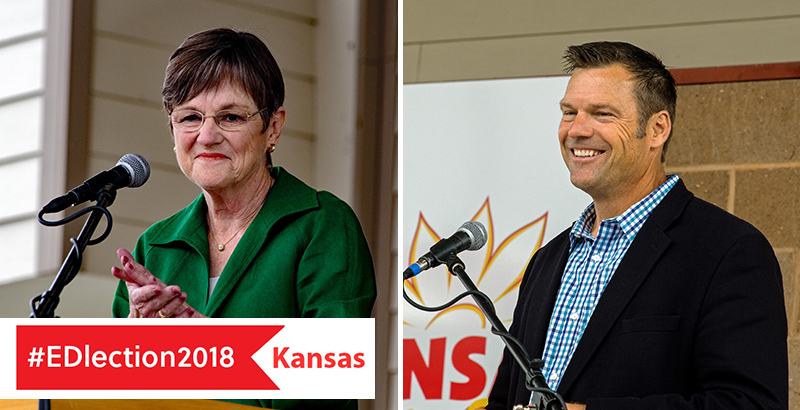 TOPEKA — Alexis Gaudreau wanted the governor to know how it feels to have her future fettered to her performance on the ACT, a standardized test used for college admissions.

The Topeka West High School senior got her chance at a meeting of the governor’s education council earlier this year, where she served an important role in identifying and humanizing stress students endure as they prepare for life after graduation.

In a Skype session with Gov. Jeff Colyer, Gaudreau, 17, outlined her frustrations with the ACT.

“It’s just like one four-hour test that kind of defines how much money you get to go to school,” she said. “I do have a 4.0 GPA, but my ACT score doesn’t reflect that, and therefore it makes it harder to get scholarship money, which makes it harder to get through med school like I want to. I wanted him to hear that part.”

She also wanted members of the council to form a plan of action.

Colyer in March enlisted educators, policymakers and business leaders to improve student outcomes in Kansas. He created the council with an executive order during a flurry of activity as his campaign tried to elevate the new governor’s stature among voters.

When he lost his bid to secure the Republican nomination for governor, those invested in the council’s work — including some who were part of a similar, unrewarded effort 10 years ago — realized they would need to complete their assessment by the end of this year. Now, as Gov.-elect Laura Kelly prepares to take office, council members are bolstered by the thought of delivering their recommendations to a longtime education ally.

“We’re happy,” said Diane DeBacker, a former Kansas education commissioner who oversees the council, “and I guess I have confidence that Laura Kelly will continue something like this.”

DeBacker, director of business and education innovation in the state commerce department, outlined suggestions she anticipates the council will offer.

They include giving thought to training in soft skills, like communication and collaboration, and navigating liability concerns to allow students to experience what the work world is like before they graduate.

One idea is to create a roadmap for private businesses that want to work with technical schools to develop skills the employers need. DeBacker said the gold standard is at Topeka’s Washburn Institute of Technology, where students learn to handle heating, ventilation and air conditioning equipment.

The council conducted a skills gap survey, she said, then realized a more sophisticated survey was needed.

“We’re trying to find the secret ingredient to the recipe,” DeBacker said.

Gaudreau highlighted the shortcomings of legislation that provides tuition reimbursement for students but doesn’t cover other expenses that can be prohibitive, such as equipment a cosmetology student needs, or the price of a uniform.

“Education gets you through everything,” Gaudreau said. “No matter what everyone tells you, education is probably the best way to be successful, and some people feel like they can’t get it, and we want to help with that.”

Another challenge, DeBacker said, is the lack of data available for the one-third of high school graduates who go directly into the workforce each year. As it is, there is no way of getting information about whether they are successful, what their wages are, or even if they are still in Kansas.

“That’s a third of every high school graduating class that we just have to say, well, I hope they’re doing well,” DeBacker said.

Mark Tallman, a lobbyist with the Kansas Association of School Boards, said follow-up data would be useful to educators as they shift their focus from traditional in-school metrics — graduation rates and test scores — toward how well students are doing after they leave.

“That’s the real measure of success,” Tallman said. “Now, schools get a little nervous because they can’t control everything that happens to a child while they’re in school, and they certainly have limited ability to know what happens when a wide-eyed freshman goes to college for the first time.”

The council is expected to ask the new governor to continue studying these issues.

The political and economic climate is different now than it was 10 years ago when former Gov. Kathleen Sebelius initiated a council to align education with economic development. By the time the council finished its work, Sebelius had left to join President Barack Obama’s cabinet.

Tallman said pushback over No Child Left Behind and Common Core standards derailed the conversation while an economic recession and tax cuts overshadowed school funding. In contrast, he said, a healthy budget surplus and the Legislature’s commitment to phase in a significant funding increase for public education have positioned Kansas to reclaim its spot among the nation’s leaders in educational achievement.

Ashley All, a spokeswoman for Kelly, said investments will have to be prioritized carefully, but she emphasized the governor-elect has made schools and students a priority throughout her 14 years as a state senator representing Topeka.

“She has a vision of education that spans from early childhood to K-12 to technical education to college to the workforce,” All said. “She will consider the recommendations of the governor’s education council in the coming months, and Gov.-elect Kelly will continue to gather additional input from stakeholders in order to improve the quality of Kansas schools when she becomes governor.”

Rep. Brenda Dietrich, R-Topeka, served on this year’s council as well as the Sebelius one, back when she was the superintendent for Auburn-Washburn Unified School District 437. She said the more recent efforts involved a much larger group and a broader focus.

Her subcommittee focused on barriers students face because of geographical location or economic disadvantages.

“I would hope that the new governor would embrace the recommendations of the education council and, if it would add value to the discussion, maintain the council as an advisory group,” Dietrich said. “Our meetings have been robust and productive, and I suspect the recommendations from all four subcommittees may need some further analysis.”

Colyer said the council united experts from education and industry, along with the voices of students.

“Together they have begun building a foundation from which our students can be better prepared for the workforce, and our businesses can find and develop young, emerging talent in Kansas,” Colyer said. “It is my sincere hope that this council will continue its very important work well in to the future and build upon the successes they have already begun.”

Gaudreau applied for and secured a position on the council following the first meeting when Colyer pointed out the council lacked student perspectives. With first-hand knowledge of what goes on in high school, and how stressful it can be to get to college, she wanted to be involved.

When she graduates in May, she plans to go to Kansas State University to major in biology with a pre-medical minor.

“I’ve seen how passionate everyone in the conference room is and how much they really want this to continue,” Gaudreau said, “and I’ve heard them say, ‘We are the people who can make it happen.’ I don’t doubt that they will.”