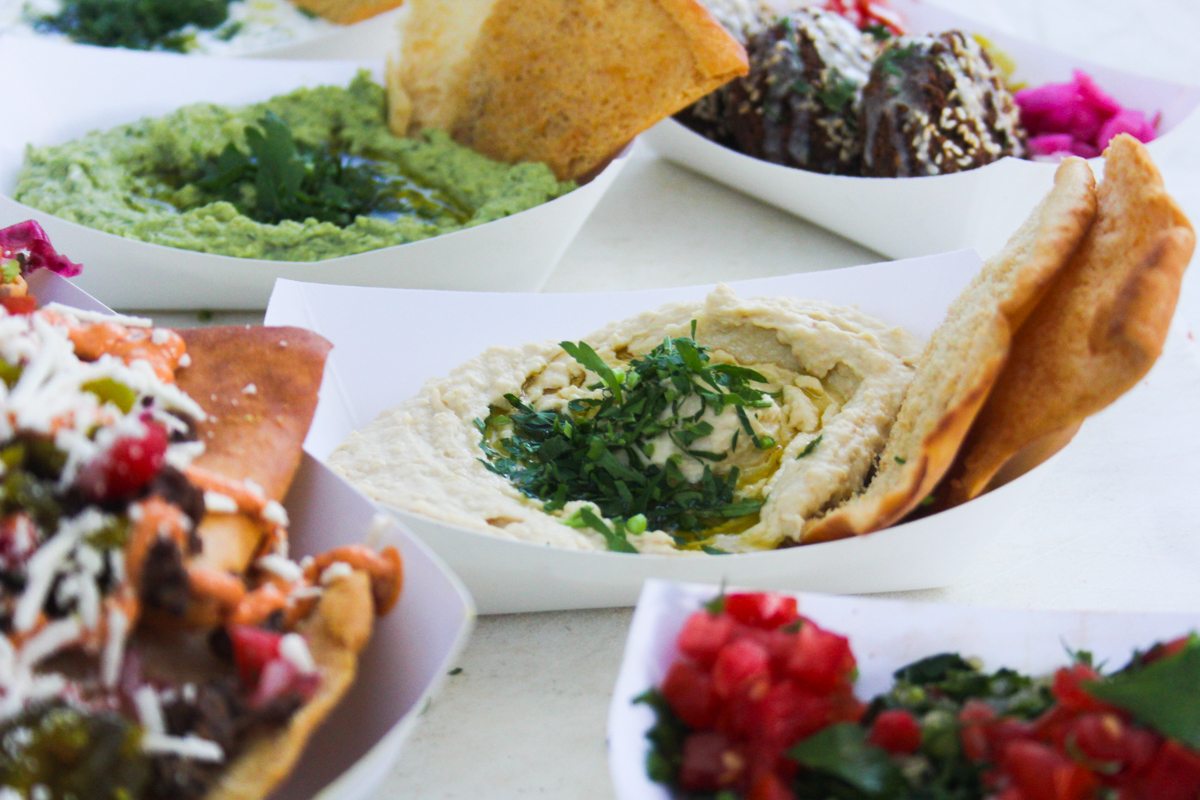 It’s state fair season and we’ve got you covered with healthy options to enjoy. This year’s roundup features everything from seafood to meat to vegan bites.

By Liora Engel-Smith and Rose Hoban

When you think of the North Carolina State Fair, you’d invariably conjure images of deep-fried concoctions of all kinds, from the traditional french fries or beignets or donuts to newer creations (We’re looking at you, fried Oreo). But the annual 10-day extravaganza in Raleigh also has another side, and it’s filled with fresh and delicious, healthier options.

You heard us right — healthy.

The fair has become a destination for sampling unusual and interesting options, many of them are not only delicious but better for you. And if you have dietary restrictions, such as gluten intolerance or a dairy allergy, you might be surprised to know that you can still partake in the fun. We’ve rounded up some of the tasty, yet healthy, morsels you may want to try. Looking for another type of food, not on our list? Check out the fair’s food and ride finder.

Neomonde’s take on tabouleh, made with quinoa rather than the traditional bulgar wheat, is one of the many gluten-free options available at the cart, located near Kiddieland, at the North Carolina State Fair. Photo credit: Liora Engel-Smith

Andrea Millington, who owns Cool Runnings Jamaican with her husband, at work in the booth across from the North side of the Dorton Arena at the North Carolina State Fair. The cart offers a variety of Jamaican food including curry or jerk chicken, vegetarian bean wrap and jerk pork with mango salsa. Photo credit: Liora Engel-Smith.

Chris Lopez came from Naples, FL to visit his girlfriend and take in the NC State Fair. He was drinking a fruit smoothie from the Smoothie in a Pineapple Cup vending stand near the tractor pull venue. They were also waiting on an order of ribbon fries, but said they’d take pass on the deep fried Ho-Ho’s. “We’re not going all out,” Lopez said.

Wesley Kvasnikoff grills up chicken breast for the evening rush at the Butcher Boys’ stand, that sits right across from the Howling Cow ice cream stand at the 2019 State Fair. The vendor sells grilled chicken or steak on a pita or roll, with lettuce, peppers and tomato topping. Photo credit: Rose Hoban.

Scott Brandt, manager of the Butcher Boys’ vending operation at the 2019 NC State Fair said they will go through several tons of meat and 3,000 pounds of onions during the ten-day event. Photo credit: Rose Hoban

Neomonde is not the only place to get some Mediterranean fare at the 2019 NC State Fair. Several other vendors offer grilled meats served as kebabs or in a pita, salads, hummous and other food that’s not deep fried. Photo credit: Rose Hoban

Hunter Pratt, an employee at the Cary-based La Farm Bakery, shows off bags of granola that fairgoers can bring home, along with some of the whole grain breads the bakery has for sale at it’s location behind the Dorton Arena, near Gate 1. Photo credit: Rose Hoban

Where: Near the Pitzer Heritage Circle and the Village of Yesteryear

Staff cook grits in water, she said, and add cheese, not butter to the southern staple. They top it with sauteed shrimp with peppers, onions and Andouille Sausage. The lump crab for the dip is roasted, she added, and blended with cheese and served with crackers.

People come to the booth near gate 8 for the delicious seafood, but also childhood memories. The Outer Banks Restaurant has been around since 1996.

“People love our menu,” Mawyer said. “And you’ll see a lot of locals come from the Outer Banks and they like our crab dip and our shrimp and grits because those are things that they’ve had at the restaurant for 10, 15, 20 years and they’ve been enjoying since they were younger.”

Where: Across from the north side of Dorton Arena

What: Jerk pork and chicken, curry, rice bowls, bean wrap and some fair favorites such as chili dogs and tacos

Andrea Millington, who owns the food truck with her husband Stephen, has been sharing the flavors of her childhood with fairgoers in Raleigh since 2000. She immigrated to the United States from Jamaica as a child and she likes to feed people the things she enjoys.

“Everything for us is baked, we don’t have anything fried here,” she said. “ … We sell what we eat and that’s how we eat.”

And people, it seems, can’t get enough of the spiced meats, baked plantains and the traditional rice and peas. Last year, Millington’s jerk pork with mango salsa earned the distinction of being named among the best new foods at the fair. Millington says customers ask her two questions most frequently: “What’s good here?” And “What’s healthy?”

The first question, she says, is hard to answer, but the second is a little easier. For vegetarians and vegans, Millington offers rice bowls with traditional rice and peas and baked plantains or wraps with spiced beans. Meat eaters may enjoy the famed pork and mango salsa or the jerk barbecue wings.

Where: Across from Dorton Arena

If you’re near Cool Runnings and want a sweet treat, Tropical Delights, just a few booths away, has you covered. With refreshing frozen fruit smoothies served inside a hollowed out pineapple and Dole Whip, a coconut-based soft-serve in flavors like vanilla and pineapple. The coconut-based treat, made by fruit giant Dole, is popular at Disney World and is only available through food vendors.

Owners Reggie and Wendy Burnette, who serve the gluten-free whip at the state fair and other events they cater, said the creamy and tangy pineapple flavor is popular with fair customers too. It is also among this year’s best new foods crop. But the smoothies are popular in their own right: The couple said staff core roughly 2,000 pineapples a day for serving smoothies.

Wendy Burnette said she’s been having the same conversation with many of the customers: they come to the booth in search of plant-based, healthier option.

“We realize how needed it is in the market that they are excited to see (our menu,)” she said.

Another place for smoothies is the Smoothie in a Pineapple Cup stand, near the tractor pull grandstand. There, you can get all-fruit-plus-ice smoothies in strawberry, strawberry/ banana, mango and piña colada (coconut plus pineapple).

Vendor Bryan Chester said, “Most of the people who come up while we’re at the fairs are like, ‘Wow, there’s something actually healthy here that I can eat, I don’t just have to eat everything fried?’”

While being interviewed, Chester’s tongue was blue. He said they do have sugar-syrup based smoothie flavors, but the fruit-only drinks are a crowd favorite.

You can still have your (perhaps deep-fried?) cake and eat it too. Here are some tips from UNC Health Talk that will help you indulge sensibly:

Where: On the backside of Kiddieland, across from the church booths

Celebrating their 10th year at the fair, staff from the venerable Neomonde have quietly carved a haven for fairgoers looking for gluten-free offerings. The Mediterranean booth offers more, though, serving favorites from its restaurants in Durham, Raleigh and Morrisville.

Staff dubbed the full-kitchen booth they occupy at the fair “Restaurant Number 4.” They prepare and serve many crowd favorites on the premises, including hummus, falafel, minty cucumber yogurt sauce and lamb kebabs. Saleh said the booth produces roughly a 1,000 pounds of hummus per day and somewhere in the neighborhood of 120 pounds of falafel, fried in sunflower oil.

All of the sides on the menu, including tabbouleh, a grain and veggie salad, are gluten free. Though tabbouleh is often made with bulgar wheat, Neomonde’s version features quinoa, which does not have gluten. Staff will even make sandwiches with gluten-free pita, for an additional charge of $2, he added.

Where: Near the Village of Yesteryear, also near the Grandstand

Butcher Boys have three booths in a row right across from the Howling Cow ice cream stand. Manager Scott Brandt said the company started with the sliced London broil sandwich three decades ago when the company started serving at the N.C. State Fair.

“That’s our bread and butter,” he said.

They extended the menu to grilled chicken a few years ago, that comes served on a pita with tzatziki sauce, lettuce, onions and tomatoes.

Brandt said they would go through several tons each of beef and chicken, a ton and a half of sausages, and more than a ton of onions during the 10-day run of the fair. A gallon jar of pickled banana peppers (a favorite condiment) lasts just half a day.

For a sweet treat after a healthy meal, you can choose between the N.C. State-produced Howling Cow, across the way, or Fluffy’s Doughnuts, another of the Butcher Boys trucks, right next to the three sandwich stands.

Where: Between the sky grazer and the Graham Building

What: Artisan bread and pastries, granola, some meal options such as lobster rolls, Monte Cristo and chicken salad sandwiches.

The big draw at La Farm’s stand is chef Lionel Vatinet’s crusty, whole-grain breads used in making some of their signature sandwiches (you can also buy Vatinet’s cookbooks there). You can get a good cup of espresso-based coffee to go with your crusty bread.

The food truck also sells big bags of Hearth Baked granola made with toasted oats, sesame seeds, almonds and honey, baked in the hearth ovens at the Cary-based shop. It’d be the kind of treat to bring home from the fair that won’t make your blood sugar ring the bell.