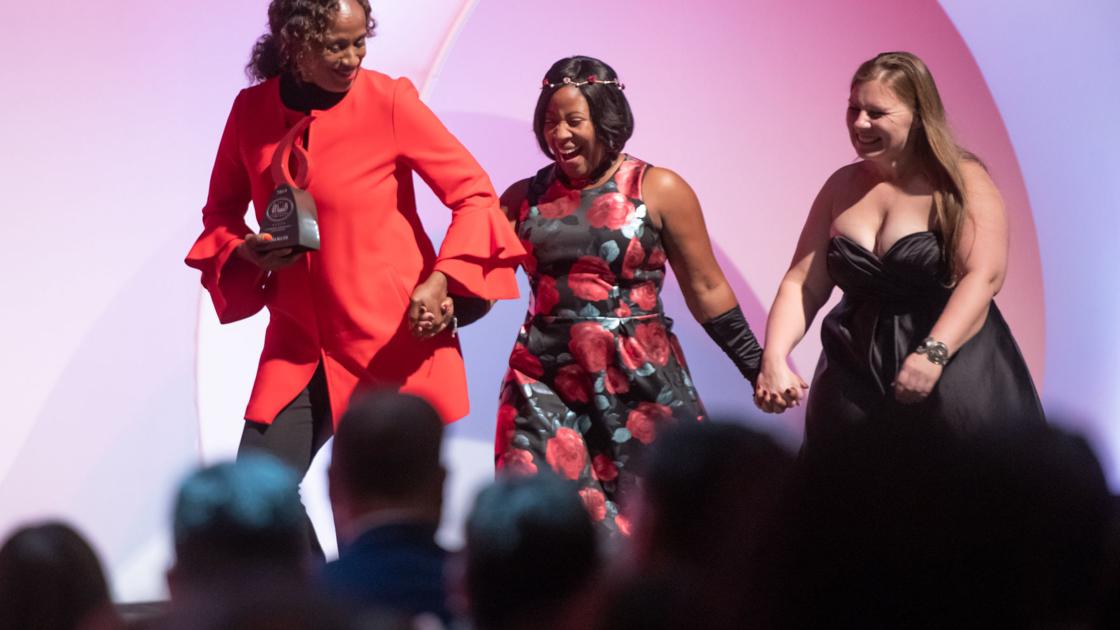 The Musial Awards are a slice of St. Louis, much like a square piece of pizza or an errant drive at Tower Tee. This unique annual sportsmanship showcase is always the Saturday before Thanksgiving — it serves kindness as an appetizer to thankfulness. And the days right after the Musials — recorded at the Stifel Theatre for a CBS airing on Dec. 21 — are often for reflecting and evaluating. This year was no different. The Musials make us wonder: How can we infuse more kindness and compassion into sports? Into teams? Into the next generation of athletes?

It’s tricky because there’s this stigma. It looms. The stigma is that being kind and nice and sweet is also a recipe for being soft. We heard about it at the Musial Awards on Saturday — a high school wrestler was afraid of doing the right thing, in fear that it would make him appear “weak.”

It’s as if there are two sides, two types of people in sports.

On one side, you’ve got the compassionate and caring.

On the other side, you’ve got the commanding and tough.

These things shouldn’t be mutually exclusive. But athletes who dip their toes (or cleats or sneakers) into the middle of this Venn diagram are sometimes fearful. There’s a fear of sacrificing. If you show too much compassion or sportsmanship, are you sacrificing status? Or even strength?

A lot of it is because winning is associated with being powerful and tough — showing emotions, dealing with feelings, that’s vulnerability right there. And you can’t be exposed as vulnerable in the intensity of sports. Don’t show your hand. Bottle things up.

Baltimore Orioles first baseman Chris Davis spoke about this in a video at the Musial Awards. He said it was the way he was kind of brought up. And the lessons of his Musial Award came from the opposite approach. The struggling slugger was on a hitless streak, so a little boy wrote him a letter of encouragement and perspective. The words touched Davis. He preserved the letter. And that very day, Davis broke the streak — with three hits.

There is beauty in the middle of the Venn diagram: The athlete or coach or team that is so self-confident and strong, yet also embraces kindness and embodies sportsmanship. You don’t have to be a jerk to be a stud. And showing emotions doesn’t mean you can’t also showcase strength in sport, be it physical strength or mental strength.

The coaches are the compasses.

But there are so many coaches who coach one unwavering way. There’s a fear of diluting their message with any softness or change-ups. It was, after all, how they were coached. And these coaches do grow talented athletes — often winning athletes — but at what cost? Again, there’s a fear of dipping that toe. But as the Musials teach us, teaching compassion rounds out athletes. So much perspective can come from coaches having some.

We saw it at the Musials, these two Arizona high school baseball coaches who were intense and demanding. In fact, they were rivals, in part because they were so similar. But the coaches came up with a way to teach their young athletes a positive lesson — and do some good. In the first inning of the biggest game of the year, a beloved student with Down syndrome was sent up to the plate. He thwacked a pitch and darted to first. The throw, wouldn’t you know, sailed over the first baseman, and the student ran all the way home, where his cheering teammates and classmates awaited.

The coaches are the compasses, but team leaders are also guides. The men and women (or boys and girls) who have ascended to a position of popularity and respect can affect a whole team. Even a student body. The Musials encourage. They affirm to us that kindness is coolness. Imagine if the strongest kid in school was also the nicest kid in school? Imagine the inspiring trickle-down affect that could have?

And there is a beauty to forwards and power forwards paying it forward. At the Musials, there was the story of a fifth-grade boy winning the big race, but when another kid fell, the leader went back to see if he was OK. The kid badly injured his wrist. On the drive to the hospital, his family spotted a car pulled over, a family in trouble. And the little kid suggested they postpone his hospital visit to help that family of strangers first. Incredible.

In St. Louis, before we give thanks, we thank those for giving kindness. And the Musial Awards are also a treasure trove of inspirational gems. Different people take different things from the experience — but most everybody takes at least something.

It’s funny — as we evolve as thinkers about sports and coaching and leadership, really the best lesson is looking back. Because if being a superstar and super-kind worked for Stan Musial, it should surely work for other St. Louisans, too.

Keep up with the latest Cardinals coverage from our award-winning team of reporters and columnists.