How the Rat Pack Transformed Las Vegas into an Entertainment Destination 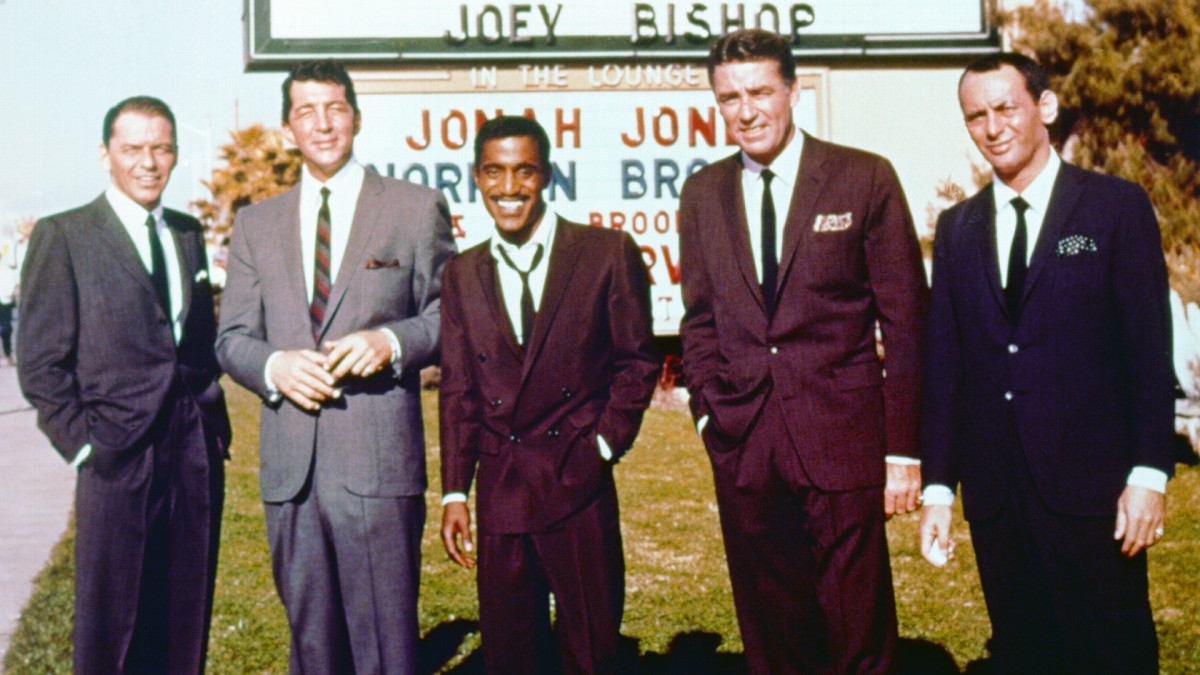 They were the toast of Hollywood, a group of actors who came together at the Los Angeles home of silver-screen stars Humphrey Bogart and Lauren Bacall. But their effect on the popular culture would extend beyond California’s sunny climes and help put the then fairly modest resort and gambling destination of Las Vegas, Nevada firmly on the tourist map.

Stories vary on how the “Rat Pack” moniker came into existence. In Rat Pack Confidential, author Shawn Levy writes that the group were christened when Bacall said they looked “like a goddamn rat pack.” The first version of the group often met at Bogart’s Holmby Hills residence and included, along with the hosts and Sinatra, a revolving door of various actors such as David Niven, Ava Gardner, Robert Mitchum, Elizabeth Taylor, Judy Garland, Katharine Hepburn and Spencer Tracy.

After Bogart died in 1957, the name would eventually come to represent the five-person group of Sinatra, Martin, Davis Jr., Lawford and Bishop. Though they reportedly referred to themselves as “the Clan” or “the Summit,” the group never called themselves the Rat Pack, that name was generally adopted by the media and has stuck to this day, despite Sinatra’s public disdain for the label.

Sinatra’s was ‘the spark that changed Vegas’

Sinatra performed his first gig in Las Vegas in September 1951, at the Desert Inn. But it was at the Sands Hotel and Casino, the seventh resort to open on The Strip, where Sinatra and the Rat Pack would become headliners.

Las Vegas was experiencing a post-World War II boom. The population was growing and there was a continued influx of money due to the legalization of gambling in Nevada in 1931. Money from organized crime was combined with that of respectable investors to create a playground for a growing middle class with more leisure time and expendable dollars. That drew entertainers, including Sinatra.

“Frank wouldn’t go out after dark without a sport jacket on, let alone perform out of a tuxedo,” former Nevada Lieutenant Governor Lorraine Hunt-Bono said to Smithsonian magazine in 2013. “He was the spark that changed Vegas from a dusty Western town into something glamorous.”

A string of successful movies made the Rat Pack household names

Tourists flocked to the new resorts, both to gamble and to see A-list stars who were now beaming into living rooms thanks to the growing proliferation of television sets. By 1954, up to eight million tourists a year were hitting The Strip and buying tickets for performances by artists such as Marlene Dietrich, Ronald Reagan, Debbie Reynolds, Liberace, Elvis Presley and Sinatra.

In 1960 Ocean’s 11 debuted in theaters in the United States, showcasing the Rat Pack and a romanticized, modern version of Las Vegas. Starring all five members, along with Angie Dickinson, Buddy Lester, Cesar Romero and Normal Fell, the plot followed Danny Ocean (Sinatra) and a group of his World War II compatriots who attempt to pull off the ultimate Las Vegas heist – robbing five casinos: the Sands, Flamingo, Riviera, Sahara and Desert Inn. The movie’s final scene showed the group walking away from the Sands Hotel with Sinatra, Lawford, Martin, Davis Jr. and Bishop listed as headliners on the marquee. The Rat Pack had truly arrived and their names were now synonymous with all the glitz, glamor and cocktail culture Las Vegas was selling.

The informal group made several more films together: Sergeants Three (1962), Four for Texas (1963) and Robin and the Seven Hoods (1964), the latter minus Lawford but with the addition of Bing Crosby.

But it was the Copa Room at the Sands that became their base and where they could be seen at their swinging best. In the early 1960s, when one member of the group – usually Sinatra, Martin or Davis Jr. – was headlining there was a high probability some or all of the others would show up unannounced and join in the performance, adding to the excitement and drawing large crowds, including high roller gamblers whose losses helped the casinos pay the entertainer’s ever-growing fees.

Drinking and partying happened on stage and off, with Martin often portrayed as the group’s heaviest imbiber and the butt of related jokes. “He’s got a tan because he found a bar with a skylight,” Sinatra would often quip about his pal.

Other celebrities who were regular inhabitants of the Pack’s orbit both on and off stage included Shirley MacLaine, Dickinson and Marilyn Monroe. “Oh, the Rat Pack. I’ll never forget all the fun we had,” MacLaine said to the Las Vegas Review-Journal in 2017. “They used to drag me up on the stage, but there wasn’t any dragging. I loved it. We’d make jokes and the crowd ate it up. … The Rat Pack taught me so many things about comedy and live performing.”

With the help of Lawford’s familial connection, they also attracted the young Massachusetts Senator who would go on to become the 35th President of the United States. Sinatra and John F. Kennedy had met during the 1950s and become friends, with Sinatra campaigning for Kennedy during his Presidential run and performing the “Star-Spangled Banner” ahead of his nomination at the 1960 Democratic Convention.

The juncture of politics and entertainment had seemingly reached its zenith, but Sinatra’s louche style was not as welcome when Kennedy took up residence in the White House. Chairman of the Board Sinatra reportedly fell out of favor with the Kennedys when he asked Attorney General Bobby Kennedy to leave his friend and mob boss Sam Giancana alone in 1961.

Their popularity faded with the British Invasion

While the Rat Pack taught America to swing in the first half of the sixties, the latter half would deliver the British Invasion of rock acts such as The Beatles and The Rolling Stones, the counterculture movement, the escalation of the Vietnam War and civil unrest. The “life’s a party” appeal of the Pack was waning.

Sinatra severed ties with the Sands in 1967 when billionaire Howard Hughes bought the property and cut off the singer’s casino credit line. The blue-eyed crooner packed his bags, his act and allure, and decamped to the newly opened Caesar’s Palace across the street. Mob interest in the town would soon be eclipsed by corporate conglomerates.

In 2018 more than 42 million tourists visited Las Vegas, many of them taking in shows such as The Rat Pack Is Back, a celebration of Sinatra, Dean and Davis Jr. that has been running for almost two decades. Though the originals are long gone, they helped create Las Vegas as a world-class entertainment destination, and their shadows continue to loom large over The Strip.