Travel may be off the agenda at the moment.

But that doesn’t mean you have to stop exploring new places.

Here, we round up the best travel books, virtual tours and TV and radio shows that will keep your passion for travel alive. 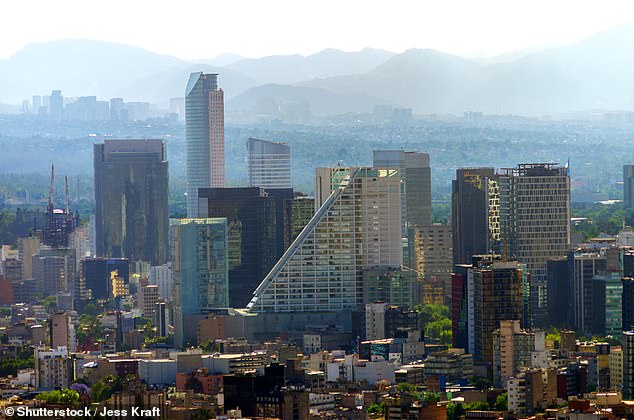 The book On The Plain of Snakes by Paul Theroux charts his journey through Mexico. In Mexico City, pictured, he describes how he is robbed 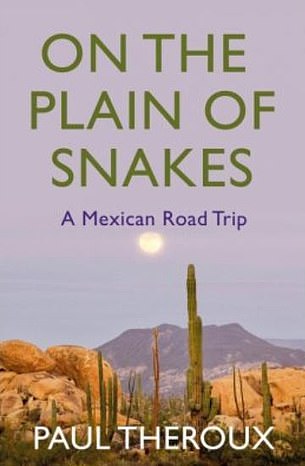 Theroux completes his journey across Mexico by car

After driving for five days from his home in Cape Cod, veteran travel writer Paul Theroux crosses the border into Mexico full of optimism in On The Plain Of Snakes, a gritty and colourful travelogue about the nation to America’s south, on whose border President Donald Trump aims to build a giant wall.

On one level, Theroux’s journey by car is all about sniffing out stories to tell it how it is in a country that suffers so terribly from poverty and drug violence.

But there is also an uplifting personal side: although he recognizes he has become an ‘old gringo’ (now 78), the act of hitting the road soon fills him with ‘euphoria’ and makes him feel young again. ‘No sooner had I gotten behind the wheel than a feeling came over me that was like being caught in a cosmic wind, reminding me of what travel at its best can do: I was set free.’

Theroux’s skill in capturing encounters and his keen ear for dialogue enrich his journey along the borderlands by the Tijuana River, as he learns from migrants about the perils of passing north and of ‘drug tunnels’ beneath no man’s land. This is not your average fly-drive.

He heads south to Monterrey and, later, along backroads to Chiapas and Oaxaca, where he crosses el llano de las serpientes (the plain of snakes). A different world soon opens up: ‘Green pastures of browsing cows, old timber corrals and tile-roofed ranchitos, wildflowers, butterflies, and hawks drifting in the cloudless sky.’

Mexico City, however, is another matter, where a corrupt traffic policeman robs him and leaves him ‘trembling’, only for the very same encounter to happen again a couple of days later. He is out of pocket to the tune of several hundred dollars.

Over the potholed roads he goes, avoiding mudslides and dead cats, as he slips into the troubled and joyous ‘mayhem of Mexican life’. It comes as little surprise that a bribe is required before he can cross into America on his way home.

Yet the great pleasures of this book are admiring Theroux’s dogged persistence, being glad he’s done it and not you, and sitting back in self-isolation and enjoying his many mishaps and insights.

Land of the rising sun 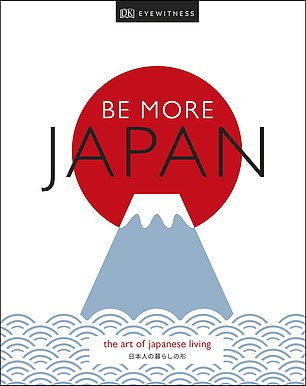 The book, Be More Japan: The Art of Japanese Living, where you can learn all about Japanese culture

Those who had been planning a trip to Tokyo for the 2020 Olympic Games in July — now postponed until next year — can get a taste of life in the land of the rising sun from home with Be More Japan: The Art Of Japanese Living.

Learn all about J-pop (Japanese pop music), how to conduct yourself in an onsen (a hot spring), martial arts, sumo wrestling, the Japanese semi-obsession with robots and video games, street food etiquette, sushi, and what makes the perfect Japanese garden.

There’s a special section on otaku, Japanese for ‘geekery’ and a word used to describe fans of anime (animation), manga (comic or graphic novels), and video games.

This in part explains the increase in popularity of ‘maid cafes’, where waitresses dress up in maid costumes and act as servants. Colourful pictures add to the text of this well-designed coffee table book that will have you dreaming of the Far East, in all its peculiarities. 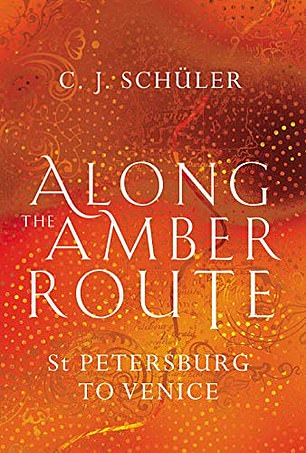 More than 90 per cent of the world’s amber comes from the Baltic Sea — where ancient Greeks and Romans sourced the prized condensed pine resin for transportation south.

The result is a charming travel journey that begins in St Petersburg — to see the famously over the top Amber Room in the Catherine Palace — before snaking onwards to Estonia, Latvia, Lithuania, Kaliningrad, Poland and the Czech Republic, finally reaching Venice.

Schuler goes amber-hunting on beaches (eventually finding a piece of his own ‘Baltic gold’ washed up near Klaipeda, in Lithuania), visits many an amber museum and reflects on his own family’s connections to the route south; his father is from Wroclaw in Poland, a key staging post.

Well-drawn maps highlight his journey, in which Schuler describes his travel frustrations and peppers the text with intriguing historical asides. Some amber is 50 million years old and it was especially valued by the ancient Greeks and Romans, he says, for its mysterious ability to feel cool in the summer and warm in the winter.

The Amber Route is comparable to the Silk Road from China to Europe, if not quite as exotic.

Perhaps when Covid-19 is finally done and dusted, there will be a tourist stampede.

Airpano is a project by team of expert Russian photographers who specialise in shooting 360-degree aerial panoramas of exceptional places around the globe. Locations range from the skyscrapers of Manhattan to the salt flats of Bolivia, along with the New Seven Wonders of the World, which include the Great Wall of China and the salmon-pink ruins of the Rose City of Petra in Jordan. 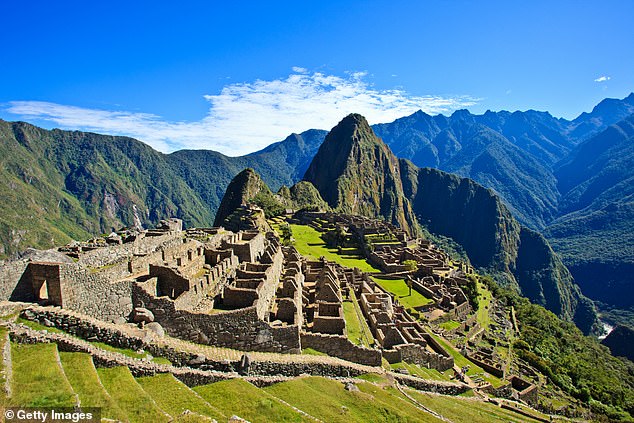 It normally takes four days to walk the famous 26-mile Inca Trail from Ollantaytambo to the ancient lost city of Machu Picchu, in Peru, but now you can see it all in an hour without even having to get up from the sofa — just go to YouTube (follow the link below).

This scenic video follows a party of trekkers as they climb high into the Andes to reach incredible sights, such as the mist-wrapped ruins at Winay Wanya, which only those going by foot usually get to enjoy.

Explore.org is the largest collection of live cameras observing wildlife and nature across the planet. Viewers can watch in real time or click on the highlights to see enthralling footage of Alaskan brown bears catching fish, mountain gorillas lazing around in the jungles of the Congo, or a giraffe grabbing a quick drink at a waterhole in South Africa. 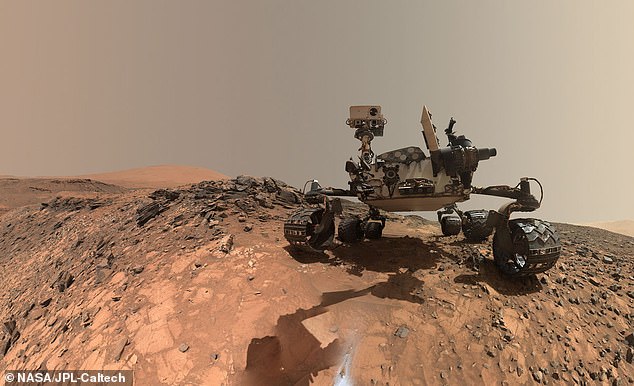 Nasa’s Curiosity Rover, which has gathered many images of Mars since landing there in 2012

Being stuck indoors all day isn’t much fun, but you can broaden your horizons spectacularly by taking a close look at the planet Mars, some 140 million miles away.

Using images gathered by Nasa’s Curiosity Rover, which landed there in 2012, viewers at home can contemplate an austere rocky landscape that includes enigmatic features such as the Pahrump Hills and Murray Buttes.

Google Arts & Culture is an innovative little app that lets you pay a virtual visit to more than 1,200 museums and archives worldwide.

The fascinating content ranges from a peep inside Captain Scott’s Hut in Antarctica to a journey round Europe with Impressionist painter Claude Monet, in which his works now hanging in London’s National Gallery are paired with the scene today.

If you’re using your time at home to sort out a zillion travel photos, check out the inspirational images snapped by the winners of the 2019 Travel Photographer of the Year awards.

Families will enjoy the incredible works by young travellers from age 11 and up — and if you’ve got a super-shot of your own, entries for 2020 open on May 1.

In this show’s second series, archaeologists search for Queen Cleopatra’s lost tomb and dive to ancient ruins in the Mediterranean Sea.

In series one, you can watch at channel4.com, mysteries of tombs found in the Valley of the Kings are investigated. 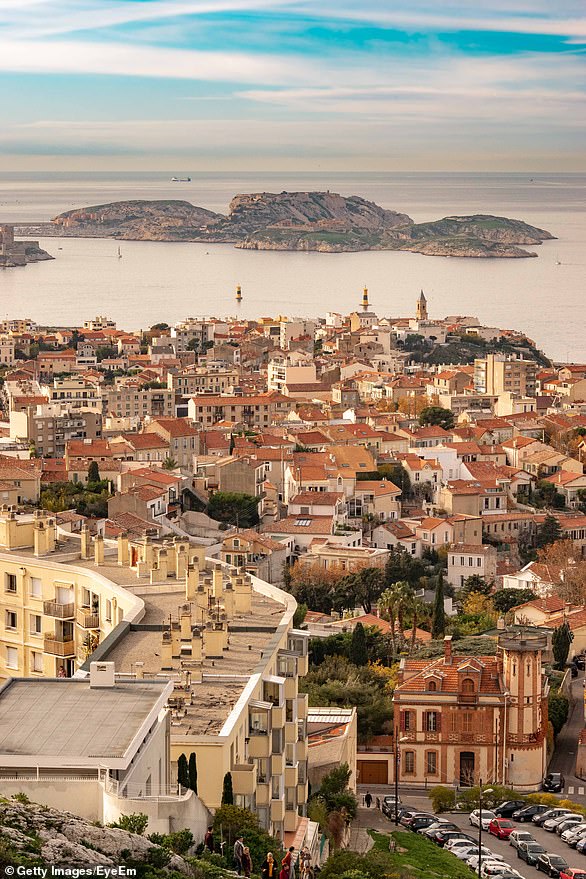 The Hairy Bikers start their Mediterranean Adventure in the French city of Marseille, pictured

Si King and Dave Myers — aka the Hairy Bikers — head to Provence as part of their Mediterranean quest to eat more healthily. Starting in Marseille they try classic Bouillabaisse (fish stew) before heading west to sample octopus pastry and barbecued snails.

On your bike in Mallorca

Each year, thousands of British cyclists head to Mallorca to enjoy its dry climate and challenging, twisty roads. It’s no surprise Bradley Wiggins, who is interviewed, has a training base there.

The forests of Romania are vast and mysterious — home to brown bears and lynx — and referred to by some as the Amazon of Europe. Yet they are under pressure from loggers, and protecting them can be a dangerous job, as Tim Whewell reports.