In India, old tires are being transformed into fun and safe playground equipment 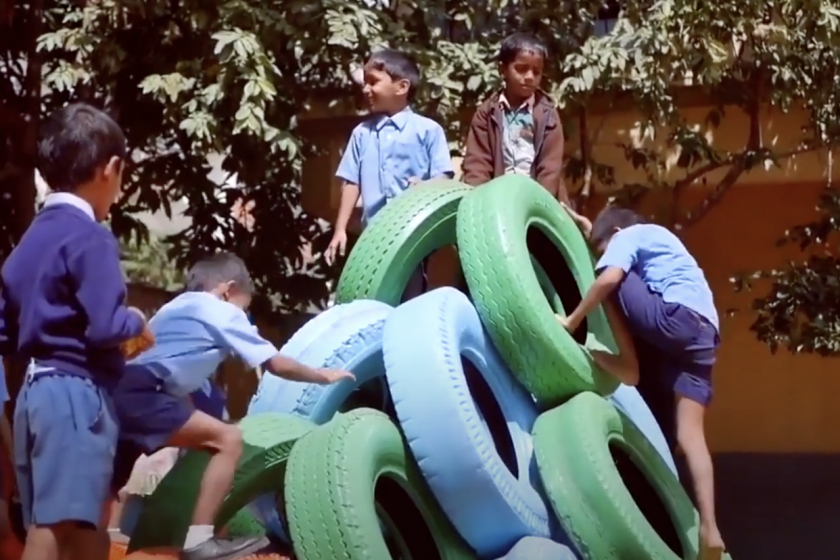 Why Ireland Has the Most Miserable Lockdown in the Western World

Gary Dempsey was born in Wexford, Ireland, and had a successful career in football (the European sort). He played for Everton and Aberdeen. After retiring from professional sports, he opened a gym, Match Fit Fitness, in Wicklow. With gyms closed in Ireland, he has been offering workouts to followers online as a way of fighting off depression. On February 19, he unburdened his mind on Twitter about the Irish government’s lockdown policy. “I’m hurtin’ today. . . . I want to ask the Irish government, ‘When do we matter?’” His jeremiad was a viral sensation, and it’s not entirely safe for work, but probably safe for “work from home.” My feelings today. I’m hurting. I really am. pic.twitter.com/DEJipb9UIu — Gary Dempsey (@Dempz8) February 19, 2021 He has a right to complain. Ireland is running the most miserable lockdown in the Western world. Some countries, like the United States, have never been as strict. Others, like Israel or New Zealand, took harsher and more stringent measures than Ireland ever did, but did so for much shorter bursts of time, with the aim of relaxation. Ireland, however, seems to have a lockdown perfectly calibrated to be a marathon of penitence, anxiety, and misery. A brief relaxation is followed immediately by a terrible surge in cases, and the door slams shut again. It has never been strict enough to exit more thoroughly, as has been done in Australia and New Zealand, but the restrictions of daily life over 14 months have been much more difficult and emotionally taxing than anything known in America. The government of Ireland, was effectively, if not quite legally, handed over to a National Public Health Emergency Team (NPHET). This group of doctors and epidemiologists informs the public of the government’s restrictions, and lately has even taken to publicly criticizing the public’s level of compliance. European nations such as France and Poland are going back into lockdowns now. Ireland never left. From mid October to Easter Sunday, with nothing but a five-day respite at Christmas, the government of Ireland has had people in what they call a “level-five lockdown.” The details of this arrangement are rather shocking. No visitors to any households. You can meet with members of one other household in an outdoor setting, so long as it is not a home or garden. Only 25 people may attend funerals or weddings. Anything aside from stingily defined domestic travel and even exercise beyond 5 kilometers is prohibited, and enforcement was dramatically stepped up in January. That is, even a 3.11-mile run is illegal. After some hemming and hawing, the government also admitted that saying Mass publicly is an offense. One note of difference from America, however, is that Ireland’s schools have been running. The Irish government’s own Human Rights and Equality Commission issued a report in late February warning that the government’s empowerment of NPHET had made it “difficult to maintain effective democratic oversight.” It rebuked the government’s attempt “to secure the quasi-legal enforcement of public health advice, in a manner that may infringe the principle of legality.” Effectively, Ireland’s public-health regime was only “quasi-legal.” The misery is perhaps enhanced by Ireland’s sometimes awkward place in the world. Culturally, it is a part of the Anglosphere; America and the United Kingdom have overwhelming media influence there. Ireland’s youth often emigrate or temporarily relocate to Anglophone countries around the world for work, and so conditions on the ground seen elsewhere are highly visible in Ireland on social media. But politically, Ireland is part of the EU’s botched vaccination rollout. And so Ireland sits in the longest and most stringent lockdown in the Anglophone world, while every radio program, half of the news programs, and the social-media feeds are filling up with news about how much faster everyone else outside of Ireland is being vaccinated. In recent weeks, there have been days when the United Kingdom vaccinated more people in a day than the Republic of Ireland had vaccinated since January. The humiliation is close to home, too. The U.K. also had absurdly intrusive lockdown policies. But now, Northern Ireland, the part of the U.K. that sits on the same island as the Republic, has vaccinated nearly 40 percent of its population. Ireland sits just at 10 percent. Why is it like this? Isn’t Ireland a land of rebellion? Beyond voices like Gary Dempsey, not really. Social critic Conor Fitzgerald has diagnosed Ireland’s political culture as suffering from an acute case of “goodboyism,” which he defines as “the tendency in the Irish establishment to ostentatiously direct themselves towards external sources of cultural authority over and before the Irish populace.” Resistance to lockdown is associated with Donald Trump, or troglodyte Tory backbenchers. Ireland self-image is more enlightened and progressive than that. The Royal Irish College of Physicians made Dr. Anthony Fauci an honorary fellow this March. He proceeded to warn them against getting too frisky too soon. Pat on the head received: Good boy! With some hope of vaccine deliveries picking up in the next months, there is hope of an exit. Though perhaps not in time to begin salvaging Ireland’s desperately stricken tourism and entertainment businesses this year. Even now, more major sporting events, such as the UEFA European Championship football games, may cancel their Dublin dates, owing to the country’s inability to crawl out of lockdown. On Easter Sunday, a priest said mass on the rocks of Achill, where the Mass was said the last time a government in Ireland made saying it vaguely criminal. Two men in Dublin, both getting their 5k of exercise, met and brought lilies to the General Post Office, which was the site of Ireland’s great rebellion in 1916. They were conscientious men who would have no truck with lockdown skeptics. But, for this patriotic act, they were hassled by the Guards. “You’re not exercising.” In fact, this gesture was an exercise of sorts. Commemorating that place on that day in Ireland summons people to contemplate the “unfettered control of Irish destinies.”