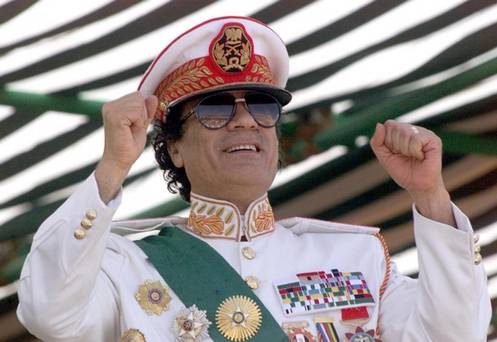 Well, one mad dog anyway: Libyan tyrant Muammar Gaddafi, dubbed “the mad dog of the Middle East” by then US president Ronald Reagan in the 1980s.

To be honest, this was a story that could only have emerged from the Dublin of that decade, a bleak, depressed place blighted by poverty, unemployment, emigration, heroin and, as we learned way, way too late for our own good, rampant political corruption.

“I cannot overstate the grimness of the city,” said journalist Tonie Walsh. “It felt like the decade of no hope.”

Things weren’t too good for the League of Ireland, either, and especially for those two great Dublin clubs St Patrick’s Athletic and Bohemians, who in 1989 had been uncommonly and unceremoniously knocked out of the FAI Cup in the first round.

This meant no matches for three weekends and no income: a huge blow for players who were mostly part-timers and depended on the extra money — a pittance even back then — to supplement their income from the day jobs.

Former St Pat’s midfielder Pat Fenlon recalled that he was paid £10 a week, topped up by a £2.50 appearance fee. Not much money and not much glamour, either.

Sometimes the St Pat’s players had to train in St Michael’s Estate in Inchicore. “We had to clean the glass off beforehand,” said Fenlon.

So when word came through that the football-mad (but mainly just mad) Gaddafi wanted an Irish team to go to Libya to play one of the country’s top sides, Al Ahly Benghazi, it seemed like a golden opportunity to earn some extra cash and enjoy an exotic holiday in the sun.

The Libyans were under the impression they’d be seeing the Irish team, the one managed by Jack Charlton that had qualified for Euro ‘88. What they got instead was an Irish team, made up of players from St Pats and Bohs, under the stewardship of Brian Kerr and Billy Young.

There was uproar. Irish football suddenly found itself catapulted from the back pages to the front pages.

Gaddafi’s Libya was an international pariah. The previous year, it had been behind the Lockerbie bomb that blew up Pan Am Flight 103, killing all 243 passengers and 16 crew.

It was also selling tens of millions worth of arms and ammunition to the IRA — not that this stopped the Taoiseach, Charvet Charlie Haughey, and the Irish beef barons engaging in lucrative trade with the country.

Brannigan’s film handled this element of the story deftly and nimbly, but it was at its most entertaining when revelling in a sparkling account of this strangest of footballing engagements from Kerr, Eamonn McCann and some of the players involved, including Fenlon, Joe Lawless, Mick Moody, John Byrne and Dermot O’Neill.

There were stories of ghosting through customs with bottles of forbidden booze hidden in travel bags, of “acting the maggot” at a makeshift pub in the desert, and of being treated to dinner at Gaddafi’s favourite restaurant, located in a zoo.

“We were aware that the food might not be exactly what you got at your mother’s around Christmas time,” said Kerr, that most Dublin of Dublin wits. “I think on the way home we were looking for a chipper.”

The build-up to the game involved a three-hour parade involving camels, Mercs and machine guns being fired into the air. “You wouldn’t find that going on around Phibsboro,” quipped Dermot O’Neill. Throughout this bizarre spectacle, the players sweltered in the dressing room.

The match, played on a pitch patched with bits of green carpet and sticky tape, ended in a 1-1 draw. It wasn’t as entertaining as this.

In League with Gaddafi (RTE1)