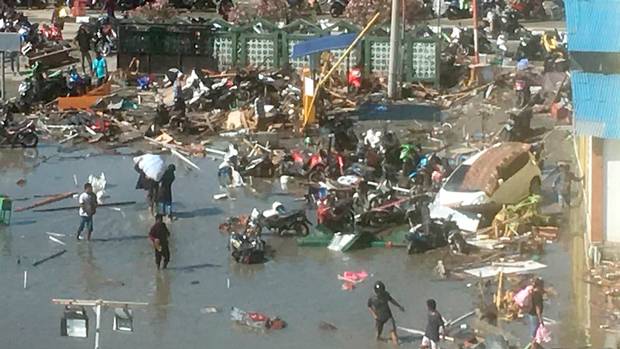 Anger and desperation are growing in parts of Sulawesi as residents faced a fourth day without food and drinking water after the Indonesian island was devastated by an earthquake and a tsunami.

On Tuesday the official death toll from the disaster rose to 1,234, according to disaster agency spokesman Sutopo Purwo Nugroho. It is still expected to climb steeply in the coming days.

Signs propped along roads in Sulawesi read “We Need Food” and “We Need Support”, while children begged for cash in the streets. Queues for fuel, which has almost run out in the area, were miles long and the national police and troops were deployed to guard petrol stations and food shops.

Around 50,000 people have been displaced by the twin disaster, with many still trying to escape the devastated region. Over 3,000 people flocked to Palu’s airport on Monday, trying to board military aircraft or one of the few commercial flights leaving the airport, which has suffered severe damage. Video footage showed crowds screaming in anger because they were not able to get on a military plane.

“We have not eaten for three days,” one woman yelled. “We just want to be safe.”

Desperation exploded into anger in Donggala, the town closest to the epicentre of the massive earthquake and tsunami, with residents begging Indonesia’s president to help them as hungry survivors crawled into stores and grabbed boxes of food.

Most of the attention so far has focused on the biggest affected city, Palu. Donggala and other outlying areas have received little assistance largely due to impassable roads and many have been forced to take food from stores.

“Everyone is hungry and they want to eat after several days of not eating,” said Donggala’s administration head Kasman Lassa. “We have anticipated it by providing food, rice, but it was not enough. There are many people here. So, on this issue, we cannot pressure them to hold much longer.”

On Monday, in Ulujadi district in western Palu, residents deprived of food and water blocked roads to intercept trucks carrying food supplies, with police officers reportedly unable to restrain the crowds. In Tawaeli district in central Palu, crowds gathered at the port to intercept government aid arriving on boats.

The process began on Monday of burying the bodies, which had begun piling up in the local army hospital, in a mass grave measuring 100m long. Photos were taken of the corpses before they were buried so they could be identified by relatives.

Sutopo admitted that search teams were still struggling to reach and evacuate the worst hit areas in Sulawesi. Many in Palu complained bitterly at the failure of rescue teams, overwhelmed by the scale of the crisis, to make it to their neighborhood in time.

A major problem is that the earthquake fractured and destroyed many of the roads, leaving some areas isolated and inaccessible. Heavy equipment needed for the rescue operations only began arriving on Monday.

Many people are also believed to still be trapped under shattered houses in Palu’s Balaroa neighborhood, where the earthquake caused the ground to heave up and down violently “I and about 50 other people in Balaroa were able to save ourselves by riding on a mound of soil which was getting higher and higher,” resident Siti Hajat told MetroTV, adding her house was destroyed.

President Joko Widodo urged survivors to be patient as they wait for aid to be distributed upon arriving in Palu.

Associated Press contributed to this report