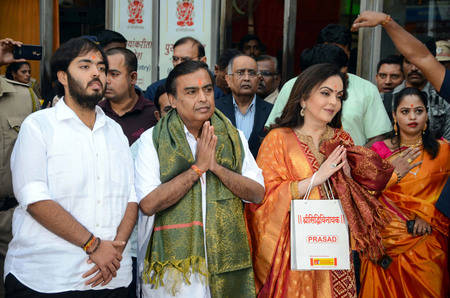 was born in Aden and grew up in Mumbai. Today he is the richest person in India and one among the most influential and powerful personalities on the earth. While he has proved his business acumen and talents to the whole world, he has so many other notable things about his personality. Here are a few interesting facts about Mukesh Ambani that are awe inspiring.

Hails from a middleclass family

Mukesh Ambani was born in a lower-middle class family. Their family lived in a simple 2 bedroom apartment in Mumbai. He was hardly given pocket money during his youth and always used to travel in public transport.

During his school days, Mukesh had a keen love for the game of Hockey. He in fact lost his interest in studies due to his preoccupation with the game.

A strict vegetarian and teetotaler

Mukesh has never consumed alcohol in his life. He is also a pure vegetarian by food habits. His favorite foods are chapatti, rice and dal. He does not mind eating anywhere even from a roadside stall as long as he gets access to tasty food.


Mukesh pursued his MBA program from the Stanford University. He had to drop from the college as he was called back at home to support his father who was at the process of setting up a Polyester Filament Yarn Manufacturing Plant.

His nick name is Muku. By nature Mukesh Ambani is a shy person and gets nervous while he has to address the public.

He is the owner of the largest refinery in the world

Mukesh commissioned a refinery in Jamnagar in . The refinery has a capacity of processing 668000 barrels in a single day. It is the largest refinery in the world today.

He accounts for 5% of the country’s GDP

The taxes paid by his firm Industries makes about 5% of the total tax revenues made by the country.


Reliance Fresh consists of over 700 stores

In 2006 Mukesh started a chain of stores called Reliance Fresh and the network consists of more than 700 stores across 93 cities of the country.

Mukesh is simple in his nature and dressing. He always loves wearing a simple white shirt and black pants. He never follows any brand. He is a lover of films and watches about three movies in a week.

His house is the most expensive one

His house is today the most expensive residential property of the world. Antilia is located in South Mumbai. The value of this property is more than $1 billion. The house has 27 stories and supported by more than 600 staffs. He has his father’s photograph and his family photograph in every room of his property.

He has a custom built car-bus vanity van

He loves travelling in a customized car-bus vanity van that was ordered to be made for his taste. The worth of the van is around 25 crore in Indian money.