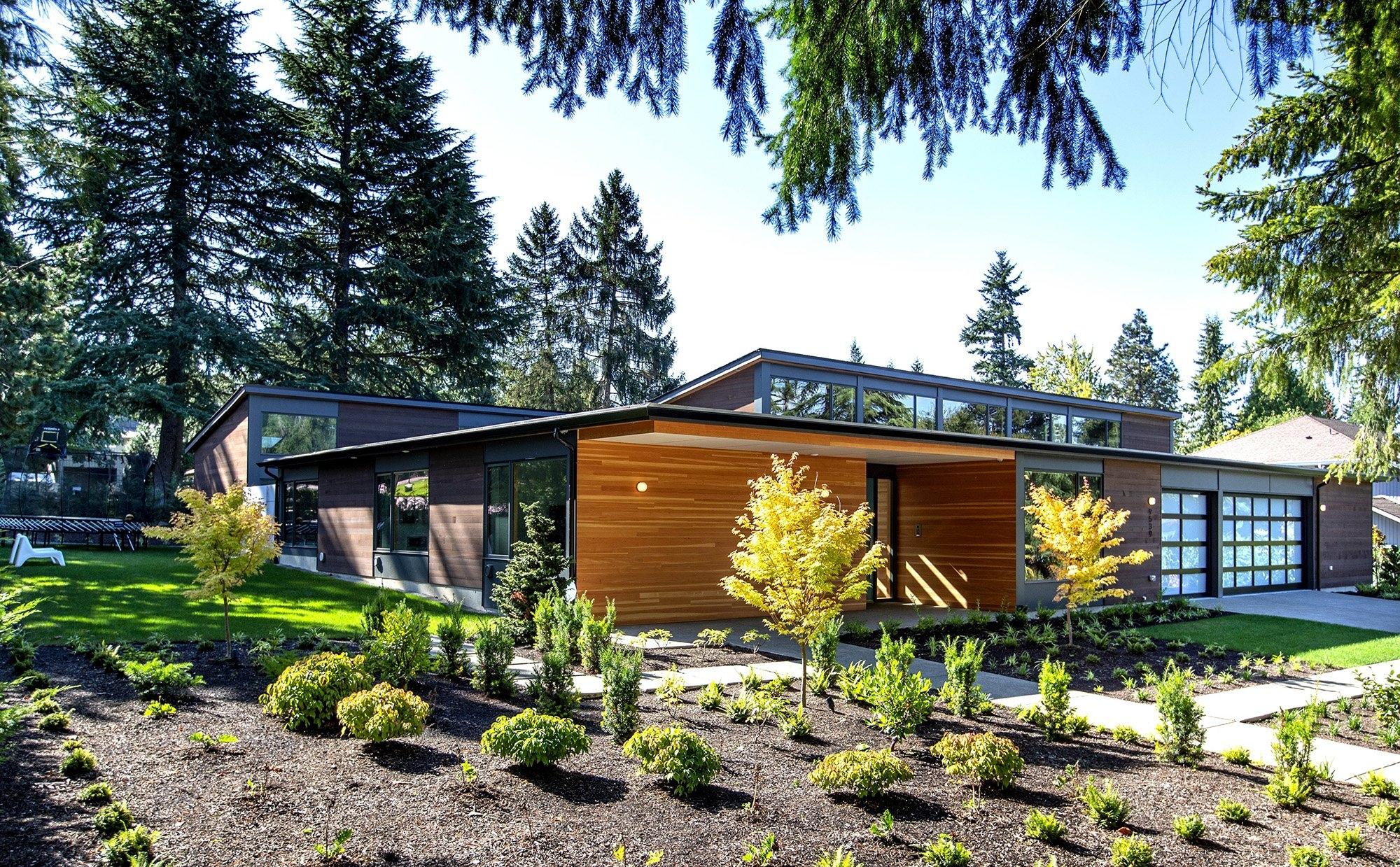 CLYDE HILL, Wash. — High in Clyde Hill, there’s a corner lot whose three surrounding roadways are far busier than the elegantly sleek design of the new home burrowed among them.

“Intersections,” it turns out, drives much of that elegantly sleek design.

Jeff and Jeanine Eulberg were moving from downtown Kirkland, where they had no yard and no privacy, and they wanted both. They hit their first crossroad — remodel, or build something new? — after settling on this gently inclined site. “There was a house here that had been empty for five years,” Jeanine says.

“It sort of looked like a Dairy Queen, with a Mansard roof from the ’70s,” says architect Paul Michael Davis, who took the wheel from there.

That forlorn old house came down. In its place, Davis designed a single-story home distinguished not by a dated DQ profile but by expressive, sloping roofs and clever clerestories.

“We wanted the house to face the quieter road, and we love midcentury. This is perfect: modern, new and still the feel of that,” says Jeanine.

“Jeff and Jeanine asked us to focus on creating a sense of privacy on this otherwise-exposed site; they also wanted a house filled with natural light,” says Davis. “We sunk the house down and buried it on the exposed street side in order to create a private, green, southwest-facing courtyard space.”

And here’s where those interesting, even alphabetical, intersections come in: Around that fabulous courtyard — the perfect grassy play space for daughters Avery, 6, and Reagan, 2 (and for grown-ups right nearby, in the covered outdoor living area) — the soaring great room and master bedroom, both under those sloping roofs, form an L-shaped cocoon of privacy. And then, says Davis, “The house’s secondary spaces are arranged as a second, peripheral L-shape around those primary rooms. The remaining spaces are capped with a low-profile flat roof.”

Low-profile, though, steps aside where those two Ls intersect and overlap. “We wanted the entrance to be very dramatic,” says Davis.

Tucked among durable, darker cedar siding on the covered exterior spaces, and softer vertical-grain fir under deep, deep eaves: a powerful 4-foot-wide pivot door in brilliant blue. “When we saw the door, we had to have it,” says Jeanine.

Inside, overhead, says Davis, “The entry sequence features a 40-foot-long skylight with the roof framing exposed below the glass. There’s a bold solution here, blending the inside and outside. It goes over the hallway and the outdoor deck.”

You start to pick up that (literally, structurally) sunken feeling of indoor-outdoor intersectionality in the guest room, at the entry end of that hallway, and it gracefully builds en route to the corner reading nook, a “very important threshold” of public-to-private movement, Davis says. “We had an epiphany: If we pulled the windows down to the ground, we could bring the outside inside.”

By the time you’re squarely into private territory, an intimate courtyard off the master bathroom welcomes in natural light (and greenery, thanks to its central tree) while protecting privacy where you’d really appreciate some privacy.

“Inside/outside continuity was one of our super-early ideas,” Davis says. “We knew the bathroom was on the busy (street), so we’d turn it in, and put a screen on it.”

Glazed blue bricks continue inside and outside the bathroom courtyard, too — and contribute to the purposeful placement of robust colors that pop up, selectively, against a consistent backdrop of minimal materials (all the interior wood is fir, and all the flooring is ground-face concrete); classic modern furnishings; and expansive, gallerylike walls of white.

Those blue bricks reappear in the reading nook, butting up against more-muted gray bricks, which also show up inside and out. “We introduced a little color with the brick,” Davis says. “The gray is the same size on the fireplace, barbecue and wall.”

Black-and-white tiles pattern the powder room. Soft blue chairs slide under laminated white cabinetry in the awesome art-project workstation behind one side of the glistening white kitchen; a wood ceiling and storage built-ins warm the play room behind the other.

The boldest hues of all, though, are reserved for the Eulbergs’ artwork, colorfully curated by art adviser Lele Barnett.

The two powerful pieces in the great room are by Seattle artist Brian Sanchez. “We needed something huge here,” says Jeff. “We wanted to do color with the art: really bold, bright art on the wall. The first day we got it, our (then-) 1-year-old had a cold and wiped her nose on it. Brian came out and fixed it. He redid the whole dark-blue.”

In a family home of, and on, prominent intersections, that single act just might represent the perfect junction of local, custom artistry … and a very cool house.