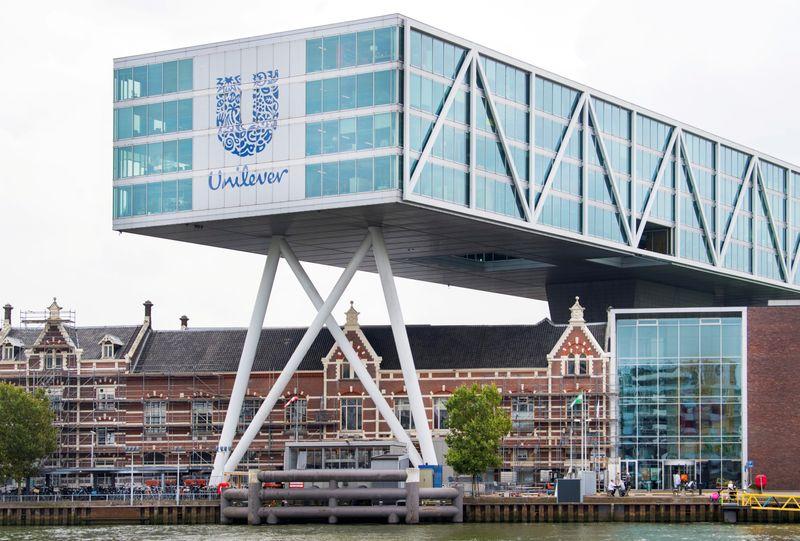 (Reuters) – Six months after Unilever’s (ULVR.L) UNc.AS Alan Jope suggested he may get rid of brands without “purpose”, investors are wondering when he will deliver.

Their sights have long been set on the Anglo-Dutch firm’s foods business, which has lagged growth in the rest of the consumer goods giant for most of the past decade.

The CEO’s definition of “purpose” is not focused on growth, although he says brands that “communicate a strong environmental or social purpose” also expand faster than the rest.

Unilever listed four food brands – Knorr Soups, Lipton Tea, Hellman’s sauces and Walls ice cream in June among 28 “purpose-led” brands it said were growing 69% more quickly than the other parts of the business.

At the time, Jope said he would explore the idea of selling brands without such purpose, hinting at Marmite, Magnum and Pot Noodle when questioned over which. He did not set a time frame.

Yet there is no sign of divestiture activity from Jope ahead of Thursday’s release of full-year results, a banking source who has worked with Unilever said. A tightening M&A environment means the time for such deals may have passed, he added.

Unilever declined to comment on its performance or strategic plans ahead of Thursday’s earnings report.

Its peers, Nestle (NESN.S) and ABInBev (ABI.BR), have sold food operations worth billions of dollars each over the past year so they can refocus on their core businesses.

Unilever has long emphasized the high adjusted operating margins in its foods brands – 17.5%. This compares with 15% at Swiss group Nestle, although the two companies do not compete head to head in many categories.

Unilever also notes the role of foods in securing access to fragmented emerging markets, including India.

But it tested investors’ patience when it warned last month it would just miss its 3-5% underlying sales growth target. Rivals Procter & Gamble (PG.N) and Nestle are bullish about achieving their own targets of 4%-5% and 3.5%, respectively.

“Tangible signs of a get-it-done attitude may quickly take Unilever out of investors’ penalty box.”

Unilever’s food unit, which contributes 40% to total sales, has underperformed the company’s two other divisions – Beauty & Personal Care and Home Care – on an organic sales basis in 38 out of 43 quarters since 2009, according to Jefferies.

Four investors told Reuters it should hive off slow growing brands or buy in hot categories like plant-based foods to lift growth, without splashing out just to make an impression.

Analysts say center-store categories like tea, bouillon, mayo and condiments have fallen out of favor with shoppers in search of niche brands and healthier options.

Freddie Lait, founder of boutique investment firm Latitude, which holds shares worth 7.6 million pounds in Unilever, said he was looking for a meaningful action plan.

“The time is now to lay out the hard decisions in front of them and to set an ambition to get back to a medium growth rate in line with their peers,” he said.

Jope’s predecessor Paul Polman focused on margin growth rather than reinvestment in foods after seeing off a shock takeover offer from Kraft Heinz in 2017.

It was far from easy to disentangle underperforming brands from others and sell them off, the banking source said, declining to be named due to the sensitivity of his position.

Getting the right price is also a challenge.

Unilever did sell its spreads business, including Becel and Flora, to KKR for 6.8 billion pounds in 2017. But the valuation of 10 times earnings, before interest, taxes, depreciation and amortization (EBITDA) was viewed as disappointing at the time.

And making up for the selling, general and administrative costs that the business was supporting contributed to a surprise 7% earnings dilution in the year after the deal’s close.

Based on Unilever’s current enterprise value, its mayo and dressings business, tea business in developed markets or total developed market foods could each command a valuation of 13 times EBITDA, Jefferies analyst Martin Deboo said. A clean exit from food would be easier to implement, but would also significantly weaken Unilever’s business in emerging countries like India where scale helps win fragmented markets.

“Unilever are in something of a pickle in Foods: a pickle that isn’t going to be easy to get out of,” Deboo said.

Reporting by Siddharth Cavale in Bengaluru; additional reporting by Simon Jessop and Pamela Barbaglia in London; editing by Philippa Fletcher