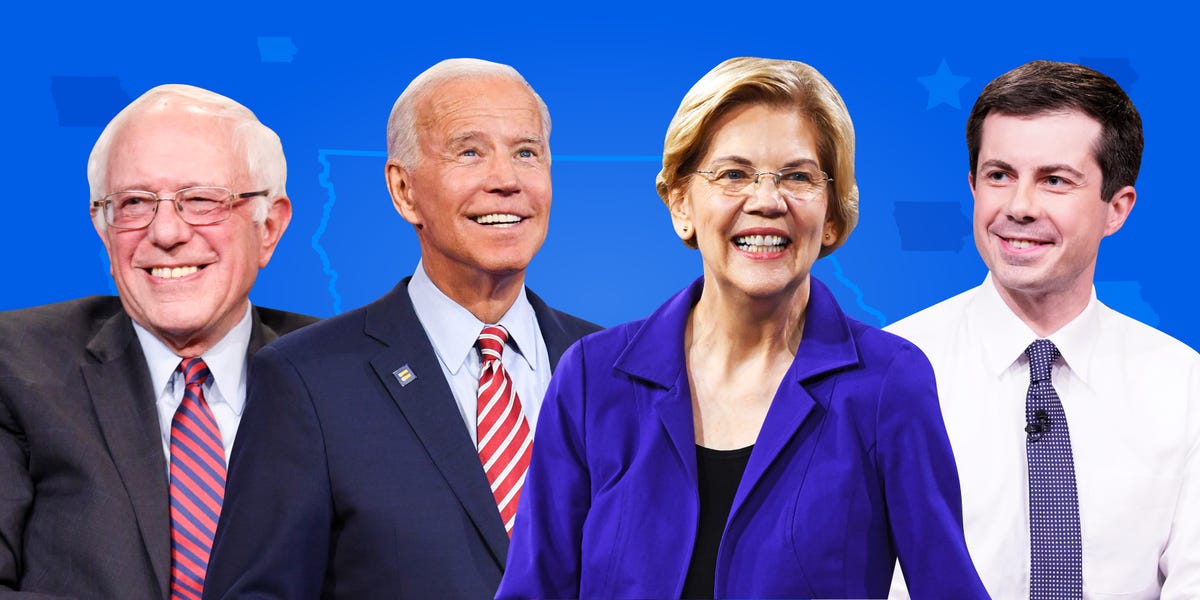 By 8 p.m. Central Time on Thursday, the results of the Iowa Democratic caucuses with 100% of precincts reporting showed Sen. Bernie Sanders and former Mayor Pete Buttigieg neck and neck in the total vote count and statistically tied in state-delegate equivalents.

In large part because of a disastrous rollout of a mobile app meant to submit results and inconsistencies in the caucus reporting process, many precinct captains were initially unable to properly send the final data to the Iowa Democratic Party headquarters, massively delaying the final release of the results.

The party held off on releasing any of the results until they were confident they had it right, but problems remain.

While the party has now released results from 100% of Iowa’s precincts, the current vote breakdown may not hold, and the race most likely won’t be officially called for days as the party verifies the results and continues to sort out several outstanding inconsistencies and errors in the data.

There are two sets of published data about the caucus results. The first set is the initial preference expression, or first alignment, from all the precincts.

The second is the final ballot with state-delegate equivalents. This is what matters in the end. As we explain below, caucusgoers get a chance to maximize their impact by caucusing only for so-called viable candidates, meaning these results will determine the winner.

Sanders leads the statewide popular vote from the second alignment by 2,615 votes over Buttigieg, and he has declared victory in the caucuses based on his vote lead.

While the two candidates are tied among state-delegate equivalents, which determine the winner, the Iowa Democratic Party is still resolving issues with the caucus results that could affect the final tally.

Here’s where candidates stand where it counts, in the tally of state-delegate equivalents:

Even after the initial fiasco with the reporting, Iowa Democratic Party has continued to release false and error-ridden data, casting doubt on the authenticity of the results in such a tight race. On Wednesday, the party had to correct a batch of data it released incorrectly showing some candidates winning votes and state-delegate equivalents where they had not.

Then on Thursday morning, The New York Times published a detailed and troubling analysis indicating that “more than 100 precincts reported results that were internally inconsistent, that were missing data, or that were not possible under the complex rules of the Iowa caucuses.”

Shortly after the publication of The Times’ story, the Democratic National Committee’s chairman, Tom Perez, called for an official recanvass of the results.

While only a campaign and not the DNC can formally request a recanvass, results from several precincts and counties could change as the party continues to review the results for errors, like the ones described below:

The delegate stakes for Iowa

Iowa holds a low share of delegates compared with states that vote later in the Democratic primary process.

Iowa has 41 pledged delegates, which is 1% of the total number that will be allocated throughout four months of Democratic primaries.

Because Iowa precincts hold not one but two rounds of preference expression, or alignments, caucusgoers’ second choices can be more important.

Caucusgoers whose first choice is viable after the first alignment cannot, however, change their preference. This means viable candidates can only gain votes in a precinct’s second alignment.

Twenty-seven of Iowa’s 41 pledged delegates are allocated proportionally at the congressional district level:

A candidate must break 15% of the vote in a district to win any delegates from that district.

There are also five pledged delegates statewide for party leaders and elected officials and nine at-large delegates. Those are allocated based on the statewide popular vote, meaning it is possible for candidates to win district-level delegates but not statewide delegates.

And because the allocation and distribution of state-delegate equivalents gives more weight to rural than urban precincts, it’s possible for a candidate to earn fewer SDEs while leading in the state popular vote — which is currently the situation Sanders finds himself in as he ties Buttigieg in SDEs.

State congressional delegations, Democratic leadership, and governors get a free ticket to the convention as automatic delegates, and Iowa has eight such people. The once-powerful “superdelegates” have largely been stripped of their power this year, and they no longer factor into the delegate math.

How the Iowa caucus results descended into chaos

By Tuesday morning, the Iowa Democratic Party had released results from 0% of precincts while the party verified all of the data with backup paper records, severely delaying the results.

Multiple precinct captains recounted not being able to report results through a new app built to report precinct-level results. They then faced hourlong wait times to call in the results to the state party, which then convened an emergency conference call with campaigns.

The party said in a statement a little after 10:30 p.m. CT on Monday that the delay was due to “inconsistencies in the reporting of three sets of results,” not any kind of “hack or intrusion.”

On Tuesday morning, the Iowa Democratic Party said it “determined with certainty that the underlying data collected via the app was sound.” It continued: “While the app was recording data accurately, it was reporting out only partial data. We have determined that this was due to a coding issue in the reporting system. This issue was identified and fixed.”

Since 1972, Iowa caucusgoers have taken seriously their role in determining which candidates are viable. An old saying posits that there are only three ways out of Iowa: coming in first, second, or third place.

While Sen. Bernie Sanders holds the narrowest of leads over the rest of the field in Iowa, most recent polls of the state show the leading four candidates — Joe Biden, Sanders, Sen. Elizabeth Warren, and former Mayor Pete Buttigieg — bunched closely together with no clearly favored winner.

Because the four leading candidates have consistently polled in double digits at or near the delegate threshold, there may not be an obvious winner or leader when the full results come out.

The Democratic National Committee just demanded a recanvass of the Iowa caucus results. Here’s what that means.

Biden’s prospects are dimmed after taking a ‘gut punch’ in Iowa, and he might not see a strong showing until South Carolina

‘What a goddamn mess’: Democratic activists are furious about the catastrophe in Iowa

This year has seen some unique strategic differences about the caucus: Presidential candidates have historically gone all in on the Iowa caucus — here’s why that’s starting to change

Get up to speed on what these delegates actually mean: Here’s how Democrats will elect their presidential nominee over the next several months

Here’s a top-to-bottom look at how the caucuses work: Everything you need to know about the Iowa caucuses, and why they may be less important than ever in 2020