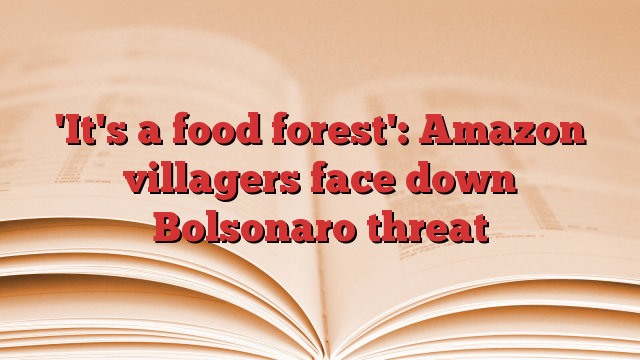 ﻿From space, the Amazon rainforest resembles a giant dark-green lung veined with blue rivers that is steadily succumbing to the disease-like spread of grey fires, orange roads and square-cut farms. What the satellite images cannot show is how most of the remaining bands of verdant, healthy foliage are defended on the ground by forest dwellers who act as antibodies to drive out malignant invaders.

Among the most impressive of these is the Tapajós-Arapiuns Extractive Reserve in the state of Para in northern Brazil, where residents are trying to bolster their economic resistance with a series of new agro-forestry and solar power projects.

The 74 traditional riverine communities who live in the area fought hard to win protected status for the region, which is 110 times the size of Manhattan. Some activists were murdered by loggers and others received death threats until their home was recognised by the state as an extractive reserve in 1988. This gives them the right to live sustainably on the land, free from intrusion by large-scale business interests.

Today, however, their region is once again under threat as the government of the far-right president, Jair Bolsonaro, encourages commercial development of the Amazon. This has put greater pressure on the residents to find alternative forms of income so the forest around them is worth more than it would be if they sold up to cattle ranchers or soya farmers.

Among the projects that aim to do this is a new solar-powered fruit pulping facility at Surucua village. Run as a cooperative by the largely women-led residents association, it is part-funded by Global Greengrants Fund UK, one of the Guardian and Observer’s climate emergency appeal charities. The mini-factory provides residents with an economic incentive to protect and replant the forest with a wide variety of trees that provide fruit, nuts, oil, medicine and other products they can use and sell.

Surucua is idyllic. Pellucid waters lap against deserted beaches of fine white sand, bordered by palms and rubber trees. The village comprises three dirt roads, several dozen wooden homes, a school, a church, a football pitch and clusters of trees of little-known indigenous fruits such as acerola, piquia and tucumã to global favourites such as mango, pineapple and banana. “It’s a food forest,” says Mayá Schwade, a biologist who works with the community. “The basic idea is to avoid monocultures.”

The new pulping centre is a small concrete building with solar panels on the roof that was built by a cooperative of 16 local women with technical support and funds from a mix of institutions and charities.

Its goal is to protect the forest and raise living standards by pushing village production up the value chain. Instead of quickly selling low-cost produce before it rots, villagers can process, package and freeze fruit, allowing them to wait for the best market price.

With help from Guardian and Observer readers, their next step will be to build a new facility that can turn the fruit into alcohol and cordials, jams and confectionery. “Our economy is very weak so this project is very important for us. We can make enough to feed ourselves and earn a little more to buy things,” Maria Aranjo, one of the founders of the co-op, explains. “It’s also fun to work together for a better life.”

Surucua is intended as a model for other communities. If living standards in this remote village can be raised with native fruit forests and renewable power, then people living in similar conditions elsewhere in the Amazon will have hope they too can generate enough money and electricity to buy and use computers, mobile phones, TV sets and refrigerators without sacrificing the natural wealth – fresh water, abundant food, clean air – provided by the forest and river.

The village hopes the small-scale project will inoculate it against the more destructive industries that are moving ever closer. “On the borders of our territory we face a lot of pressure from loggers,” says Angelo Sousa, a forest engineer who was born in the village.

Pressure is also coming from the authorities, who are weakening rainforest protections. “The municipal government wants to expand production of soya and other monocultures. In the coming 10 years, they plan to allow cultivation of these crops in the [protected] reserves. The politicians are all big landowners. There is a proposal in congress to reduce the area of many reserves, including ours,” Schwade says.

Elsewhere, the impact is already apparent. In the year to July, deforestation of supposedly protected areas of the Amazon – the world’s largest terrestrial carbon sink – hit 5,054 sq km, up 39% from the previous 12 months. To fortify forests against this, Brazilians are increasingly focusing on economic protections such as the project at Surucua.

Rather than the destructive extraction of beef, soya or gold, the agro-forestry project at Tapajós-Arapiuns aims to strengthen the forest rather than run it into the ground.