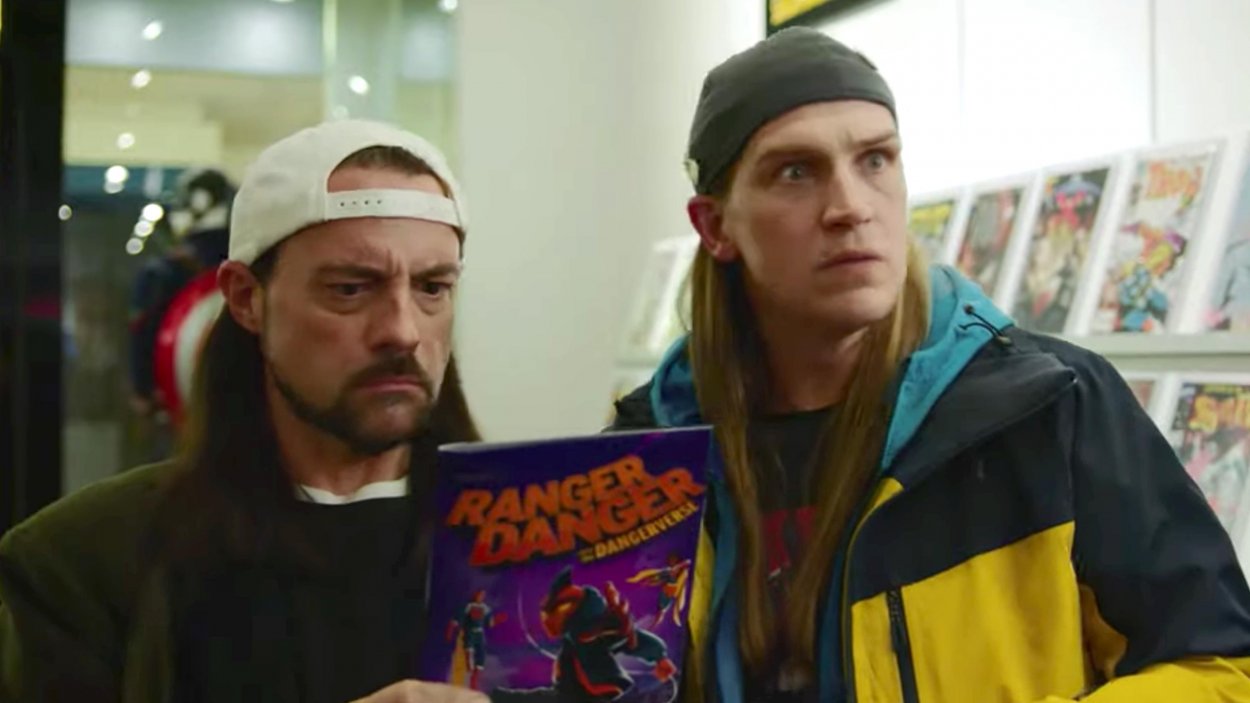 Welcome to What’s the Buzz, 25YL’s feature where members of our staff provide you with recommendations on a weekly basis. In our internet age, there is so much out there to think about watching, reading, listening to, etc., that it can be hard to separate the wheat from the chaff, filter out the noise, or find those diamonds in the rough. But have no fear! We’re here to help you do that thing I just described with three different metaphors. Each week a rotating cast of writers will offer their recommendations based on things they have discovered. They won’t always be new to the world, but they’ll be new to us, or we hope new to you. This week, Will Johnson checked out Kevin Smith’s Jay and Silent Bob Reboot, and Natasha BC Smith discovered Gangsta Rap International.

Will: Kevin Smith is back, and he’s bringing just about everyone back to celebrate his life and creations in Jay and Silent Bob Reboot. And while, of course, the film is heavy on stoner humor, not to mention the required “dick and fart” jokes, Smith is here to bury any and all hatchets and spread love, not chaos. Pre-heart attack, Smith had a vindictive side. His admirable Gen-X angst morphed into general disdain and cynicism and his film career suffered for it (though a lack of creativity didn’t help either). But post-heart attack, Smith is all about hugs and Jay and Silent Bob Reboot is all the better for it. In a movie where Jay (Jason Mewes) is sodomized by his former love Justice (Shannon Elizabeth) in a twist on a dream sequence call back from Jay and Silent Bob Strike Back, you also have tear-jerking moments of earnestness between Jay and the daughter he never knew he had, Milly (as played by Smith’s own daughter Harley Quinn Smith). And seeing Ben Affleck back, especially as Holden McNeil, just feels…right. Like a childhood blanket.

Smith himself appears as, of course, Silent Bob, but also as an exaggerated (and generally hated) version of himself. But his roasting of himself doesn’t feel forced or bitter. Instead, Smith seems joyful at poking fun of the strange existence he has as a filmmaker and super fan who gets to play in the world of his fantasies. The best part of Smith’s irreverence to himself is that the ensemble cast is in on the joke and gladly make fun of themselves too. In Jay and Silent Bob Strike Back, the hilarious Good Will Hunting 2: Hunting Season bit was infused with a bit of darkness (Affleck having dead hookers disappear, etc) but in Reboot, Affleck pokes fun more at his film choices in a cute way, like how he can’t remember Batman’s mom’s name or when he tells his fictional daughter to Argo fuck yourself. Chris Hemsworth appears as a charmingly rude beefcake, while all the Comic Book Men appear lamenting their cancellation. Jason Lee cracks a “squeakuel” joke for christ’s sake!

Though not a perfect film, bumping into these old friends from yesteryear is a joy. Jason Lee somehow doesn’t return as Banky but at least we get to see him as Brodie in a cameo where he discusses the genius of the Marvel Cinematic Universe and laments the fall of both comic book shops and of the mall (which makes its first appearance since Mallrats). And while Hooper X is sorely missed (he is one of my favorite Smith creations), both Holden McNeil (Affleck) and Alyssa Jones (Joey Lauren-Adams) appear in the film’s most affecting sequence. And while Randall (Jeff Anderson) is absent (that appears to be the one hatchet Smith couldn’t bury just yet), the ever-reliable Brian O’Halloran is back as Dante and as…Brian O’Halloran in a clever sequence that brings back most of the original Clerks cast in the black and white they were meant to thrive in.

While Reboot makes its way into art houses around the country, expect a VOD release sometime in January. It certainly is not Smith’s best film (that remains Chasing Amy) but his positive approach to his own multiverse of characters is refreshing and much needed in these divisive times.

Natasha: Vice‘s music-based YouTube channel, Noisey, is releasing a series of short (15-20 minutes each) documentaries called Gangsta Rap International, about rappers in countries you wouldn’t usually associate with rap. I’m not a big rap fan, and I just happened to stumble across the series, but I’m finding it fascinating. It shines a light on music that’s probably different to anything you’ve heard before (sure it’s rap, but the varied national accents and contexts have an effect), and on aspects of the countries’ cultures that you probably don’t know much about.

The four episodes out so far cover Poland, Ireland, Israel, and Australia. As a Brit myself, the first time I heard Dizzee Rascal rapping with an English accent, I thought it sounded ridiculous—rap seemed to be entrenched in our collective consciousness as such a uniquely American genre. However, the success over the last decade of rappers from the U.K., as well as bands like South Africa’s Die Antwoord, has proven that rap can resonate in different cultures, accents, and even languages.

As we approach the 2020s, rap is still spreading and morphing into new and interesting forms around the world. The Ireland and Australia episodes show fledgling rap scenes that are starting to create their own identities, while still being heavily influenced by the more established U.K. scene. Some of the Irish rappers are hesitant to use their own accents, but the artists that do rap with Irish or Australian accents actually sound fantastic. It adds a fresh element, and emphasizes the nuances of the rapper’s own culture and experiences.

The roots of these international movements are shown to have a lot in common with American rap, albeit with distinct variations. Most of the rappers featured talk about growing up in poverty, in neighborhoods where daily life was full of crime and violence. Like many American rappers, they’re using rap to describe these experiences, common to many marginalized folks, but often overlooked by others—and to channel their energy into music rather than into something destructive. In the Australia episode, we see rap emerging partly as a reaction to institutionalized racism, as in the U.S., but here the rappers are mostly Pacific Islanders, living in a poor and crime-ridden area of Sydney that’s largely populated by migrants and ignored by the city’s many tourists.

The Poland and Israel episodes focus on specific larger-than-life characters and their stories. In Poland we meet Popek Monster, supposedly the wildest man in rap, who intentionally got his face cut and scarred, lost part of his vision to get his eyeball tattooed, and regularly drives across the country at insane speeds without a driver’s license. Growing up in tough circumstances, he could relate to American rap and decided he could do the same thing in his own language. He’s found great success doing so.

In Israel we meet Nissim Black, formerly D Black, a Seattle-born gang member and rapper. Black converted to Judaism and moved to Jerusalem, where he continues to rap, though the content of his songs has changed a lot to focus on celebrating his religion. His new songs are popular in his community, and it’s interesting to see how he uses his music to reconcile his identity as a black man from Seattle with his identity as a Jew living in Israel—not the most common combination.

Gangsta Rap International is presented by DJ and podcaster Chuckie Lothian, who puts the subjects at ease while asking knowledgeable and insightful questions. I’d recommend taking an hour out of your day to watch the four parts currently available, and keeping an eye out for future episodes, no matter your musical tastes—you’ll learn something about the world, and you’ll get to hear something new and unique.

Those are our recommendations this week! What are yours? Let us know in the comments!

Help us keep the conversation alive! We publish new content daily that can easily be found by following us on Twitter, Instagram, by joining our Facebook Page, or becoming an email subscriber here on the site. Thank you as always for your support of 25YL!

If you would like to write for 25YL leave us a message on our website here or send an email to: [email protected]