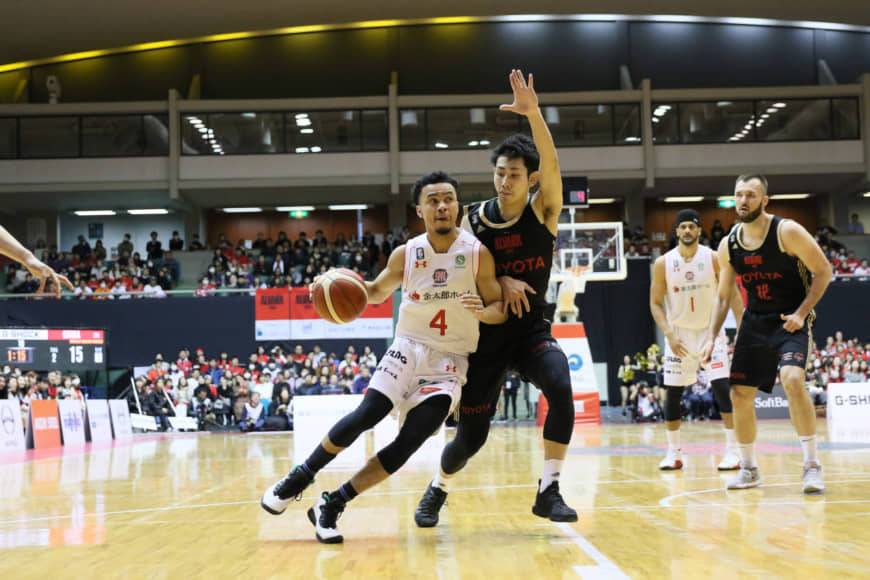 What’s more, the 23-year-old Chiba Jets rookie maximizes his playing time. He’s a force of energy whenever he enters a game.

And with nearly half of the season completed, Flippin’s been a revelation to B. League observers. In fact, Flippin’s natural talent and potential have been on display since the season started.

In three of Chiba’s last four games, Flippin produced three of his four double-digit scoring games to date. He had 12 points, three rebounds and three steals in the Jets’ 73-65 road win on Saturday over the two-time defending champion Alvark Tokyo. Then he contributed 10 points, three assists and a steal on Sunday in a 72-64 triumph over the Alvark. Against the Niigata Albirex BB on Dec. 28, Flippin sank 3 of 7 3-point attempts in an 11-point effort.

In addition, he had a season-high 17 points with five assists versus the Kyoto Hannaryz on Nov. 3.

“I’m just trying to put together complete games, trying to have more of an impact on the boards, or steals or contributing a few points when I can here or there,” Flippin told The Japan Times after Sunday’s game.

He added: “I just try to make team plays most of the time, and when I can do something to help the team … it just always helps us get into the flow. It just keeps everybody else at ease, so it just feels good to do something like that.”

After back-to-back championship runner-up seasons, the Jets (18-10) are trying to remain in title contention again. Flippin is a key part of that objective.

“I’m not sure how and the whole process of how the young man Flippin’s adjustment went, but all I can say six months later he influenced this weekend a lot,” Alvark coach Luka Pavicevic said after Sunday’s game at Komazawa Olympic Park Gymnasium. “I see him as an important part of Chiba’s roster and his role in these two games gave them a significant impulse to win both games.”

What was that impact?

“If you see both those games, it’s tough to play, it’s tough to move,” Pavicevic said. “Both teams (could) not score easy, so Chiba is scoring easier because we allowed with turnovers them to run and we allowed rebounds with second-chance offense, so they get (points) a little easier.

“But generally the battle, even though we couldn’t score, they couldn’t score on many, many occasions. So if a young player shows up yesterday and today and when things get stuck in the game, they can get unstuck. That’s, for my opinion, a significant impulse.”

Flippin, who hails from Torrance, California, has grown comfortable with the B. League’s style of play, which includes more quick backcourt players and fewer tall guards than in Southern California.

“It’s definitely a difference coming from a city like Los Angeles and the style of play that they have in Japan, but I think I’ve adjusted well,” he admitted. “Everybody is really helping me and pointing out certain areas that I need to watch and certain areas where I need to be faster or stronger or certain reads and rotations that you don’t really experience unless you are in Japan playing.”

Optimistic and motivated to succeed, Flippin set ambitious goals for his first season as a pro.

“My goal, really, is I just want to win that championship, first and foremost, and pretty much be the best rookie I can in the whole league,” Flippin said. “That’s what I want to do.”

In June, when his signing was announced by the Jets, Flippin said, “Ever since I was a kid I always dreamed of returning to Japan to play in front of family and friends. I am very thankful for the opportunity that the Chiba Jets organization has given me to be able to fulfill those dreams. Also a big thank you to my mom and older brother who have constantly supported my basketball dreams since I was a little kid, without them I would not be where I am today.”

As for launching his pro career in the land of his mother Sumiyo’s birth, Flippin beamed with pride when he was asked to elaborate on that decision several months later.

“That was a big part of me deciding to come to Japan anyway,” he said. “Just being around my family (here), they never got to see me play in college or anything like that, just with flights and everything being so expensive.”

Flippin has a large extended family in Naha, Okinawa Prefecture, and other relatives in the Kanto region.

The North Torrance High School graduate began his college career at the University of California, Riverside in 2015. He made four appearances (3.5 minutes per game) as a freshman, 19 (10.2) as a sophomore and 25 (13.7) as a junior. In a difficult 2017-18 campaign, fifth-year Highlanders bench boss Dennis Cutts was fired in January, then interim UC Riverside head coach Justin Bell ran the show the rest of the way. Texas Christian University assistant David Patrick was hired as the team’s new coach in March 2018.

For Flippin, a fresh start elsewhere made sense. He transferred to NAIA Division II Doane (Nebraska) University for his senior season.

In retrospect, he called it a “great decision,” one that included a lot more playing time to wrap up his college career.

“I don’t have no regret with that decision,” Flippin told The Japan Times. “I think it was the best path for me. Some people looked down on it, but I feel like everybody’s path is different and I tried to focus on what I could do best.”

His talents were on full display as a senior for the Great Plains Athletic Conference school. In 30 games (all starts), Flippin contributed 13.8 points and 5.1 rebounds, and was tied for No. 2 nationally among NAIA D-II players in steals (2.63 per game), demonstrating his skills at both ends of the floor.

“I think it was definitely, like, one of the experiences to be more in control a lot more of the game, so I feel like that helped me coming into being a pro,” Flippin said.

Nishinomiya Storks point guard Atsuki Kishida scored a career-best 38 points against Tokyo Excellence on Saturday. He drained 9 of 12 3-point attempts in the Storks’ 104-94 victory. He had 15 points by halftime, then poured in 13 in the third quarter to put his stamp on the game.

Kishida’s previous season-high output was 17 against the Fukushima Firebonds on Nov. 9. The 25-year-old Tottori Prefecture native is averaging 7.7 points in 32 games (one start) through Sunday.

“It was good to win the first game of the year,” Kishida told reporters after the game. “I am most surprised at the 38-point (total). My shots were good and I was able to (receive) passes from my teammates, which made me confident.”

Last season, Kishida played for the Kyoto Hannaryz, a B1 club. He appeared in 30 games.

Ayres steps up for Shiga

Veteran power forward Jeff Ayres, a member of the San Antonio Spurs’ 2013-14 NBA championship squad, has been on a double-double tear since making his Shiga Lakestars debut in early December.

In 10 games with the Kansai-based club, he’s averaging 17.9 points and 15.8 rebounds. He’s notched nine double-doubles, including eight in a row.

On Sunday, he finished with 14 points and 20 rebounds as the Lakestars (12-16) completed a weekend sweep at home versus the Levanga Hokkaido.

Ayres appeared in 237 regular-season games, including 70 on the aforementioned Spurs title team, over six NBA seasons. He also suited up for the Portland Trail Blazers, Indiana Pacers and Los Angeles Clippers. Ayres was the No. 31 pick (Sacramento Kings) in the 2009 NBA Draft.