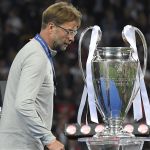 Liverpool progressed to the final in thrilling fashion with knockout wins over Porto, Manchester City and Roma, before losing 3-1 to Madrid in the showpiece event.

Klopp’s side begin the new campaign at home to Paris Saint-Germain on Tuesday night and Klopp says there will be hangover from their heartbreak in Kiev.

When asked if the defeat to Real Madrid had harmed the club, Klopp said: “No damage. No, absolutely not.

“I think we got a lot of respect because of the way we played last season and I think everyone who saw the final saw that we could have won it against a side in a completely different moment.

“They see the games we played. They saw City, they saw Rome, they saw Porto. They saw so many games which we played in a really good way. There was a lot of respect.

“It is a nice experience, it is a nice memory, but pretty sure it will help us in the moment, all that stuff, but at the end we have to start new – using the experience but not relying on it.

“The best way is when you are experienced you use your new knowledge and start again – like a virgin if you want.”

Liverpool’s front three of Salah, Roberto Firmino and Sadio Mane have collectively scored 99 goals since the start of last season – a figure matched by Neymar, Kylian Mbappe and Edinson Cavani at the Parc des Princes.

Klopp admits Paris Saint-Germain boast an impressive attacking unit but says he would not swap any of his players.

“They are good, really good, not only for Paris, but Kylian Mbappe, come on, what a World Cup he played.

“And Neymar we all know about his quality. (Angel) Di Maria, maybe he didn’t have the best time at Man United but all the rest of his career was outstanding. Cavani, also an outstanding goal-scorer.

“In the preparation I have to make sure that we know about it. I know we are quite good but we have to respect them without getting afraid of them.”

Jeff gave away £1.5m last month. Enter your predictions to be the next winner here.