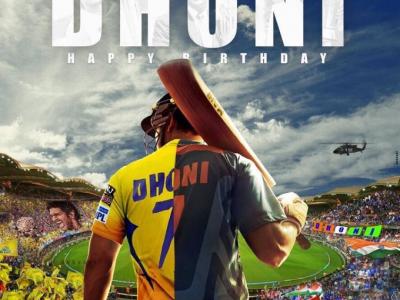 Mahendra Singh Dhoni is celebrating his 40th birthday today (July 7th). Dhoni, who hails from the state of Jharkhand, led India to great heights in world cricket with his unconventional style of play, which was evident not just in his batting but also in the way he led the team.

Dhoni, popularly known as Captain Cool and is often referred to as Thala by his followers. He is largely regarded as one of the sport’s finest captains. He had a spectacular career at the top before retiring last year.

Every cricket lover knows how Dhoni led the team under his captaincy and won the prestigious champions trophy. On Dhoni’s birthday, Sakshi Post looks into some lesser-known interesting facts about Dhoni outside the cricketing world.

1.Dhoni’s first love in school was football, not cricket. He was a goalkeeper for his district and club in the past. Mahi, as he was affectionately known, was also a club badminton player.

2.Dhoni’s passion for motorcycles is well-known. MS, on the other hand, took it to a new level in 2012 when he co-owned Mahi Racing Squad India, a Supersport World Championship team.

3.Dhoni also has a stake in the Ranchi Rays of the Hockey India League and Chennaiyan FC of the Indian Super League.

5. MS Dhoni is a patriot in every sense of the word. For his contributions to cricket, he was promoted to honorary lieutenant-colonel in the Indian Territorial Army. He served with the Territorial Army in Jammu and Kashmir for two weeks in August 2019.

6. Along with Abhishek Bachchan and Vita Dani, the CSK captain is a co-owner of Chennaiyin FC, an Indian Super League team headquartered in Chennai.

8. Dhoni has signed a long-term commercial deal with Banijay Asia, who is producing a documentary web series called Roar of the Lion on the Chennai Super Kings’ return.