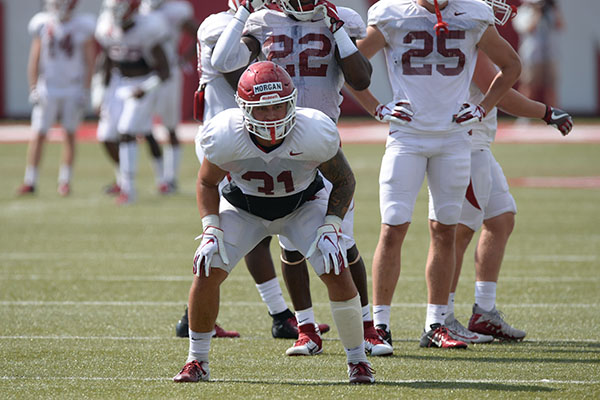 FAYETTEVILLE — The University of Arkansas scaled way back on its snap count for the final live-tackling scrimmage of training camp Wednesday.

Offensive coordinator Joe Craddock estimated the Razorbacks ran about 80 scripted plays in the 17th practice of camp, with several players held out at tailback, wide receiver and on the offensive line. The closed workout was conducted inside Walker Pavilion as an afternoon thunderstorm hit just as the Razorbacks were wrapping up their stretching.

After a run of injuries and illnesses to wideouts through much of camp, keeping players healthy was a priority with the Razorbacks 10 days out from their season opener against Portland State.

“We couldn’t afford to lose anybody else,” Craddock said. “I mean, shoot, it feels like every time we go scrimmage we lose a couple of guys. It’s been tough, but today was good because we didn’t get anybody hurt.”

[Video not showing up above? Click here to watch » https://www.youtube.com/watch?v=8cx4-3-xZ3U]

The Razorbacks had run about 175 plays in their first scrimmage of camp, then dropped it to around 110 in their scrimmage Saturday. The scaling back Wednesday even applied to the amount of live work.

“Some of it was situational, so probably a quarter of it was tackling to the ground,” Craddock said. “Others were quick whistles. We couldn’t afford to get anybody else hurt, so some periods we said, ‘Let’s just stay up. Keep them off the ground.’ What we call track to the ball.”

Redshirt freshman quarterback John Stephen Jones, with his parents and his uncle Jerry Jones Jr. watching from the sidelines, connected with tight end Blake Kern for a touchdown during the scrimmage.

Linebacker Grant Morgan picked off a pass that had been tipped for what Craddock deemed the lone turnover of the day.

[Video not showing up above? Click here to watch » https://www.youtube.com/watch?v=0kXYRADhVeY]

“There’s stuff we’ll clean up from today’s scrimmage, and the players will learn a lot from what they’ll see on film that happened today,” Chavis said.

Quarterback Ben Hicks opened the part of practice available to the media with the starting unit, which featured Devwah Whaley at tailback, Grayson Gunter at tight end, and the wide receiver trio of De’Vion Warren and Mike Woods split wide, and Treylon Burks in the slot.

[Video not showing up above? Click here to watch » https://www.youtube.com/watch?v=FIMR41TiMOI]

Both of the top place-kickers nailed long field goals in the open part of the workout.

Connor Limpert drilled a kick that was between 50 and 55 yards, and Matthew Phillips followed with a 50-yard boot that was true.

Later in the special teams work, either McTelvin Agim or Kamren Curl — possibly both — got a hand on a field goal try by Limpert to swat it away.

[Video not showing up above? Click here to watch » https://www.youtube.com/watch?v=K-8ILIyc_60]

The media observed the first three plays of the scrimmage prior to being ushered out of Walker Pavilion.

Ben Hicks completed a short pass to tight end Grayson Gunter on the first snap of the live-tackling session. Hicks was touch-sacked on the second play, though he got his pass off and completed it to De’Vion Warren on the left side. The third play resulted in a poor snap by backup center Beaux Limmer.

“Coach Anderson recruited me,” Craddock said. “I would not be here today without him. He found me at Briarwood Christian, a little small school south of Birmingham, and gave me a shot to play quarterback. I owe him a lot.”

“Miss Wendy was a great person,” Craddock said. “I remember her through the recruiting process. I remember her being around a lot with the team.

“Miss Wendy fought hard. She fought really, really hard. It’s really sad. My heart goes out for Coach. Me and my family have said a lot of prayers for his family.”

So did he decide he wanted a beard or hasn’t had time to shave during camp?

“Here’s what happened,” Chavis said. “I broke my radio, and unless I’ve got good music on, I can’t shave. That’s my story, and I’m sticking to it.”

The website SportsBetting.ag has installed Arkansas as a 150-1 shot to win the SEC championship, the same odds the site has given Ole Miss and Vanderbilt.

The Razorbacks were not given the lowest win total by the site, with their 5.5 over/under number ahead of Ole Miss and Vanderbilt at 5 each.

The University of Arkansas will hold its second One Hog Call on Aug. 30 at 1 p.m. at several venues around the state.

The celebration was started last year to rally Razorback fans on the day before kickoff of the season opener. The event will be held at the Fayetteville Town Center at 15 West Mountain St.; at the Chi Omega Greek Theatre on the UA campus; and at War Memorial Stadium in Little Rock, with activities starting at 12:30 p.m. at each of those sites.

The UA is encouraging fans to post photos and videos of their Hog call on social media using the hashtag #ONEHogCall. Last year’s event generated responses from 40 states, 16 countries, 62 schools and 65 Arkansas businesses.

Singer Robin Thicke visited the Fred Smith Football Center on Wednesday. Thicke took pictures with Chad Morris and various groups of players as he toured the facility. Thicke, the son of the late actor Robin Thicke, is performing in Dallas on Saturday.